Those new contracts come with new income tax bills, but certified public accountants for professional athletes say most players are more focused on winning than on their new tax bill.

A chance at an NBA championship will always supersede a tax burden, said Ryan Losi, a financial adviser and executive vice president at PIASCIK, an accounting firm.

“For these superstar players, income tax rates are not a driving factor. Players absolutely care more about winning than tax rates—nobody wants to lose,” Losi said. “Income tax rates can be a smaller driving factor that could help a player pick a team in Texas over a team in California, but really nothing more. I see them playing a ‘cherry on top’ role at most.” Texas doesn’t impose an income tax, and California has the nation’s highest rate at 13.3%.

State income tax rates are just a small piece of the puzzle, according to Geoff Marsh, a financial adviser at Octagon Financial Services, a firm that advises many well-known American athletes, including NBA stars Stephen Curry and Chris Paul, as well as Olympic swimmer Michael Phelps.

“The overall goal for a player is to land where they can win,” Marsh said. “The tax portion is definitely part of the discussion, but it is just one of dozens of factors in negotiation talks.”

Bloomberg Tax took a look at five of the biggest player moves since free agency kicked off July 1.

Every player is subject to the U.S.'s 37% top federal rate and state income taxes, which vary. Florida, Tennessee, and Texas don’t impose an income tax, but have NBA teams.

After three seasons with the Golden State Warriors—and winning two championships—Durant chose to sign with the Brooklyn Nets. New York has a significantly smaller top state income tax rate than California, so Durant will see $1.6 million more of his salary than he would have in California (based on his 2019-20 salary).

Leonard will also see an increase in his salary, but for a different reason. During the 2018-19 season, Leonard played for the Toronto Raptors and was subject to Canada’s 33% top federal rate and Ontario’s 20.53% top provincial rate.

The other three players Bloomberg Tax analyzed are all subject to higher state income tax rates because of their offseason moves.

Paul George, who was recently traded to the Los Angeles Clippers after two seasons with the Oklahoma City Thunder, faces the biggest financial loss. Oklahoma’s top income tax rate is 5%. As a result of his move to California, George will pay $2.6 million more in taxes (based on his 2019-20 season salary). 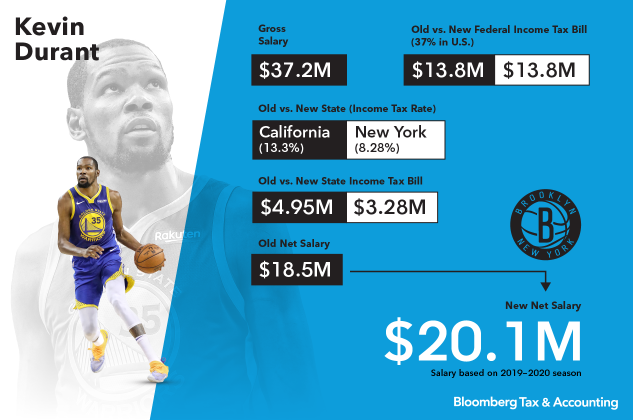 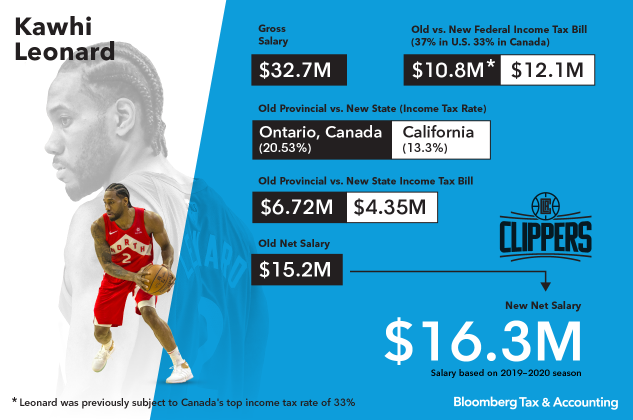 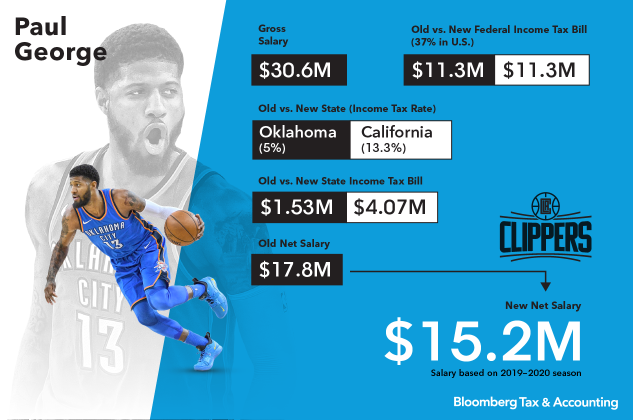 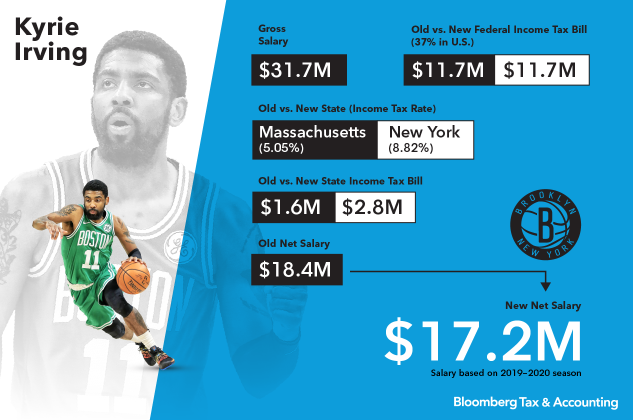 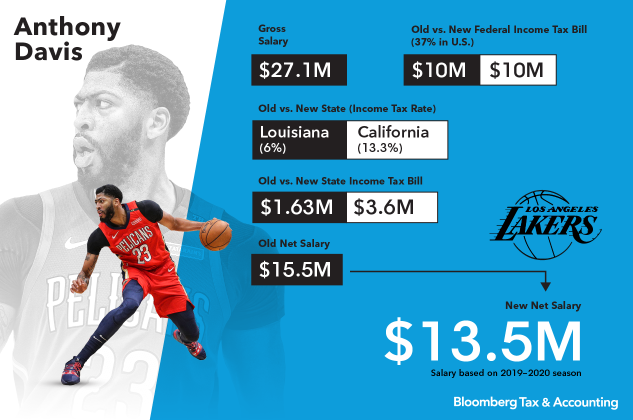 “Veteran players definitely take these rates into account when deciding where to play next,” he said. “These seasoned players have seen years of tax returns and understand just how much they’re losing.”

While players like Kevin Durant and Paul George are technically veteran players, the term “veteran” is often attributed to a seasoned player who might might sign with a team for the league minimum, which increases based on the number of league years played, Losi said.

Rookie players have no say in where they are drafted to play, so tax rates aren’t really on their radar, Losi said.

Every American professional athlete is also subject to “jock” taxes, which are calculated by the amount of time a player contributes to “income-related work” in any state that administers an income tax. The time is measured in “duty days,” Sean Packard, tax director at Octagon Financial Services, has said.

The jock tax is calculated by taking the amount of time a player spends in another state and dividing it by the total number of income-related work days, which start at the beginning of training camp.

Players are also subject to agent fees, which average about 3% of their salary, Packard said. In addition, individuals making more than $200,000 are subject to a 0.9% Medicare surplus tax.