The SEC under acting Chair Allison Lee is gathering feedback on whether to designate a new or existing organization to set standards for ESG disclosures.
Andrew Harrer/Bloomberg via Getty Images

The Securities and Exchange Commission is poised for a fight with Republicans and business interests as it looks to develop uniform rules for how public companies report environmental, social, and governance matters to investors.

Battle lines are being drawn as the SEC gathers feedback on whether to designate a new or existing organization to set standards for ESG disclosures or establish new reporting rules without one. Acting SEC Chair Allison Lee suggested last month that a standards body could be structured like the Financial Accounting Standards Board.

While the SEC weighs how and if it should mandate sustainability reporting, trillions of dollars are flowing into ESG-backed investing. And without clear rules, investors are left to rely on what companies choose to say.

Progressive groups—which have long lamented vague and inconsistent reporting on topics such as workplace diversity and greenhouse gas emissions—are pressing the agency to take swift action on ESG disclosure standards. But the leading Republican on the Senate Banking Committee says the SEC can’t endorse a standard setter without congressional authorization.

“Congress should reject such an idea out of hand,” Sen. Pat Toomey (R-Pa.) said in a statement to Bloomberg Law. “What matters is whether an issue is financially material to a reasonable investor, not if it conforms to the woke Left’s opinion about what’s best for humanity.”

The SEC likely would face legal challenges if it decided to create a new standard setter or authorize an existing one without congressional approval, said Tyler Gellasch, who was a counsel to former Democratic SEC Commissioner Kara Stein.

“I hate saying this is controversial, but it is,” said Gellasch, a fellow at Duke University School of Law’s Global Financial Markets Center.

Lee has prioritized agency efforts to enhance corporate ESG disclosures since she took office earlier this year, one of several climate-related goals of the Biden administration. Lee in March asked the public for input on next steps, including whether to designate a sustainability standard setter.

The public has until June to weigh in. The SEC isn’t expected to take action before then, when the agency likely will have President Biden’s nominee Gary Gensler as chairman.

The Center for American Progress, a progressive think tank, wants the market regulator to act on its own.

“Whatever way they do it, the SEC needs to begin doing this,” said Alexandra Thornton, the group’s senior director for tax policy.

The U.S. Chamber of Commerce is skeptical about a standard setter, said Thomas Quaadman, executive vice president of the Chamber’s Center for Capital Markets Competitiveness. The business group has concerns about why the SEC would outsource some of its disclosure authority and how a standard setter would function.

“The SEC has to evaluate and deal with a number of different disclosures, which they do, but they don’t have a standard setter for,” Quaadman said. “Why do we want to do that here?” 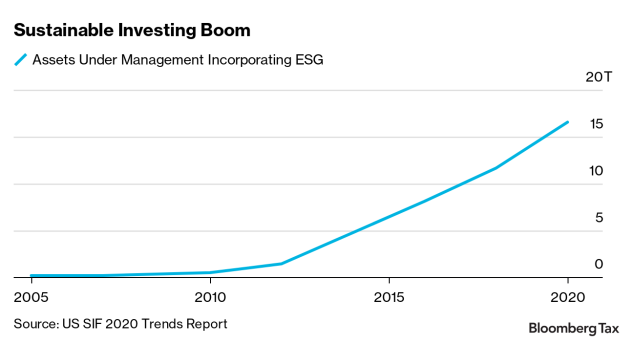 The SEC should wait to see what happens across the Atlantic, where international accounting rulemakers are setting up a new sustainability standard-setting board, said Robert Herz, chairman of FASB from 2002 to 2010.

That new board, backed by the London-based International Financial Reporting Standards Foundation, will take on as its first task writing rules for companies to consistently convey their climate change risks. It plans to lean on work already done by voluntary groups like the Sustainability Accounting Standards Board.

The SEC has been working behind the scenes to support the international project. And any possible U.S.-based effort should closely align with those international rules, said John Coates, acting director of the SEC’s Division of Corporate Finance, in remarks to a securities conference April 7.

Starting from scratch in the U.S. should be a non-starter, Herz said. Investors want global guidance and much work already has been done.

A Menu of Options

Another option could include the SEC asking FASB’s parent organization, the Financial Accounting Foundation, to set up a new panel in the foundation’s Norwalk, Conn. headquarters.

The foundation in September sent a survey asking whether it should tackle sustainability issues or set up its own board. But that presents a bevy of logistical issues.

“Who’s going to pay for it?” said Terry Warfield, accounting professor at the Wisconsin School of Business at the University of Wisconsin and former member of the FAF board of trustees.

Efforts to standardize sustainability reporting in the U.S. could reach far beyond greenhouse gas emissions or how companies view and treat their employees. New requirements could cover corporate political spending or how much businesses pay in taxes to jurisdictions around the globe.

Many companies already voluntarily report on some of those figures. Requiring the reporting in regulatory filings would require more intensive oversight of how that information is created and at least some level of review by auditors.

The markets would benefit from an organization that understands how any ESG requirements interact with accounting and other reporting and that will strike a balance between investor interests and preparers’ ability to deliver, said Benjamin Edwards, an associate law professor at the University of Nevada at Las Vegas.

“You would not want an entity that is entirely captured by the industry to set toothless standards. That being said, what we also do not want is a ham-handed approach that drives up cost,” he said.

Rather than relying on the SEC to directly write any new disclosure rules, institutional investors and even some businesses would prefer an independent entity similar to the FASB to have that job, saying it would be less prone to political interference.

The current alphabet soup of frameworks and voluntary standard setters frustrates investors and companies, said Bob Laux, who previously worked for the International Integrated Reporting Council, and who is now an associate director for the Practising Law Institute.

It’s going to take an outside authority, like the SEC, to bring it all together, he said.

Coates urged parties not to wait until the June deadline to comment on the SEC’s disclosure plans. In particular, Coates said he wants to hear ideas for how an ESG standard setter should operate and who should oversee it.

To contact the editor responsible for this story: at mferullo@bloomberglaw.com; at jharrington@bloombergtax.com