EY cut back its U.S. lobbying expenditures the most among the Big Four accounting firms.
Photographer: Tolga Akmen/AFP via Getty Images

U.S. inspection access to audit firms in China and a related law that would delist some Chinese companies from U.S. exchanges were among the issues the Big Four accounting firms spent millions lobbying the federal government over during the last year of the Trump administration.

Perennial issues related to audit firm oversight, the independence of the Financial Accounting Standards Board, and immigration rules for skilled workers were among the many issues the four largest U.S. accounting firms—KPMG, Deloitte, PwC, and EY—lobbied on last year.

The four firms spent a combined $8.7 million in lobbying for federal issues, records show. Like many U.S. companies, the lobbying tab for each declined from 2019—down nearly a quarter (23%) combined—as the pandemic limited in-person contact with lawmakers and regulators from the Federal Reserve to the Securities and Exchange Commission. Ernst & Young LLP posted the single-biggest drop, cutting expenditures nearly in half from a year ago. 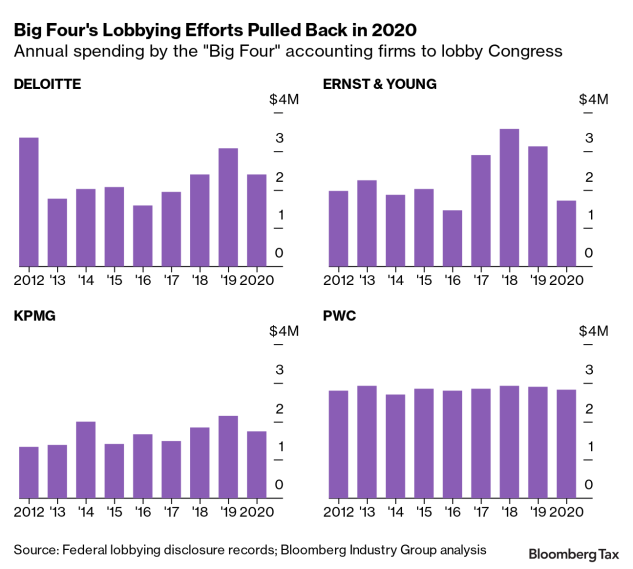 None of the four firms Friday immediately elaborated on their lobbying efforts. PwC LLP declined to comment, while Deloitte LLP and EY did not immediately respond to requests for comment Friday.

“As a firm, we will continue to engage on matters that are important to the audit and tax professions and that enable deep and liquid capital markets to support a thriving economy,” said KPMG spokesman Russ Grote in a written statement.

The largest accounting firms typically lobby on issues that directly impact how they run their business, such as audit regulation. They also look to weigh in on issues that impact their clients, such as major changes in accounting standards like the newly adopted standard for credit losses, said Joe Schroeder, an accounting professor at the Indiana University Kelley School of Business.

The start of a new administration will likely alter the companies’ lobbying strategy for the coming year. “The future direction of the PCAOB will be a big issue for the Big Four,” Schroeder said.

The incoming Biden administration also faces implementing a law—signed by President Donald Trump in December—that requires Chinese companies listed on U.S. exchanges to hire an audit firm whose work has been inspected by the Public Company Accounting Oversight Board, the nonprofit regulator tasked by Congress with overseeing the audit industry.

The PCAOB’s yearslong effort to access the work of Big Four auditors based in China took center stage as part of escalating trade tensions between the two countries and comes amid renewed pressure on the firms to ensure their Chinese colleagues are meeting the needs of U.S. investors.

In addition, all four firms listed immigration issues among lobbying issues, in particular the H-1B and L-1B visa program, which involve job candidates seeking professional positions in the United States. Many corporations over the years have lobbied to loosen restrictions on these laws.

The firms routinely use visas for these high-skilled workers to bring in professionals from their affiliates around the world for a rotation in the U.S., Schroeder said.

The coronavirus pandemic has changed lobbying tactics if not corporations’ overall strategies to influence legislation, and resulted in an overall decrease in lobbying expenditures between 2019 and 2020, said James Thurber, a professor of government at American University in Washington.

“Corporate expenditures have gone down because there are fewer face-to-face interactions” on and around Capitol Hill, out of concern for catching or spreading the virus, Thurber said. Instead, companies like the Big Four are lobbying via Zoom and other remote means, which are less expensive than in-person interactions.

Overall, the firm’s lobbying expenditures collectively have held steady over the last eight years, representing just a fraction of the billions in revenue they earn annually.

-With assistance from John Dunbar and Aaron Kessler.