The Big Four audit almost two-thirds of the approximately 330 companies that went public through special purpose acquisition companies since 2020, with Ernst & Young and its affiliates leading the way.

For those freshly minted public companies that emerged from the boom, it’s been a different story. The largest firms — Deloitte & Touche LLP, PricewaterhouseCoopers LLP, KPMG LLP, Ernst & Young LLP and their affiliates— audit almost two-thirds of the approximately 330 companies that went public through special purpose acquisition companies since 2020 and are still trading today, according to Bloomberg data. EY and its affiliates lead the Big Four in the de-SPAC client market, with 65 companies that went public via SPAC on its roster.

The Big Four’s embrace of the market is no surprise; it makes sense for firms to follow the money and accept buzzy clients in emerging industries. But a disproportionate number of those new companies come with financial reporting red flags compared to the broader public market, according to investment research software firm Bedrock AI.

The Big Four audit almost half—25—of the 52 struggling companies that as of Tuesday were trading below $1 a share, the threshold where they risk getting kicked off public exchanges.

One in five companies that went public via SPAC since January 2020 have flagged accounting errors severe enough to warrant restatements, Bloomberg Tax research shows, although half of those errors were due to widespread problems among SPACs and their accounting for warrants and redeemable shares. One in five former SPACs also blew Securities and Exchange Commission filing deadlines at least once, according to Bloomberg Tax research. 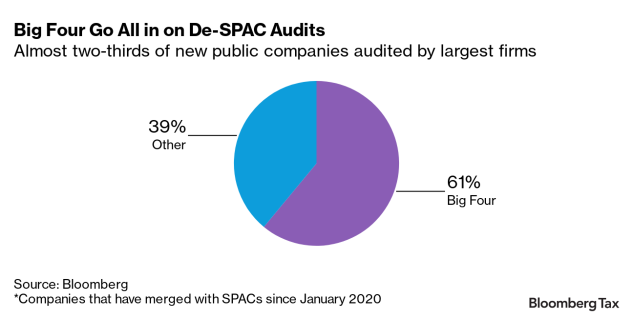 To be sure, there are different levels of risk. Clients who miss SEC filing deadlines, issue going concern warnings, and have to fix accounting mistakes take more time and manpower to audit. Auditors accept that tough-client tradeoff by charging them more money and asking hard questions. Potential lawsuits, allegations of fraud, or regulator scrutiny is a harder risk to accept, Shaub said.

“It’s the ones that bring on a tsunami type of risk, where you’re in the headlines day after day and there’s a big law suit that you end up settling,” Shaub said.

The speed at which some fledgling companies became publicly traded during the height of the SPAC boom add to auditors’ risks, said Kecia Williams Smith, an assistant professor at North Carolina A&T State University and a former staff member at the US audit regulator.

“The inherent risk is a challenge because of the nature of how these companies were created and how they were funded,” Smith said. “It absolutely should increase the auditor’s assessment of risk.” 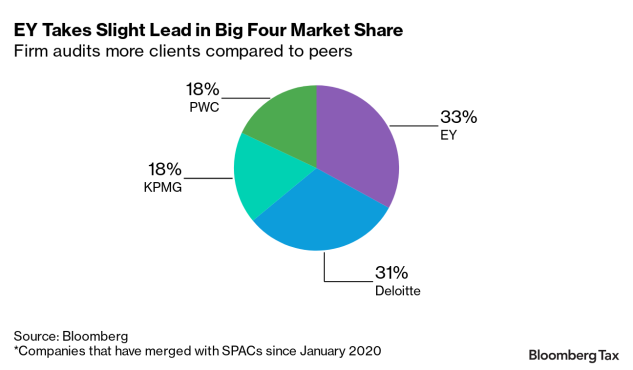 SPACs are shell companies formed for the sole purpose of raising cash, going public, and promising their investors they’ll find an up-and-coming private company to acquire, usually within two years. That privately held business then gets a shortcut to a listing on a public exchange like Nasdaq or the New York Stock Exchange.

SPACs have been around for years but were long associated with penny stocks or companies that couldn’t access the public market through the traditional initial public offering process. Then came 2020.

A frothy market and a surge of pandemic government cash fueled a record number of special purpose acquisition company listings. The number of SPAC IPOs more than doubled in just one year, from 248 in 2020 to 613 in 2021, according to SPAC Analytics. Regulator scrutiny and poor returns from companies that came out of the SPAC craze has cooled the market significantly, with 82 SPACs going public so far this year.

All those SPACs had to be audited before going public. The Big Four barely touched them, leaving 90% of the blank-check audit work to New York-based Marcum LLP and Withum Smith+Brown PC, based in Princeton, NJ.

Blank-check firms are just that: blank. They have no stores nor inventory, no machines, no employee benefits to pay. Their audits, in theory, should be simple — but accounting for fund-raising tools and investor incentives tripped up hundreds of SPACs in 2021, causing two waves of mass accounting restatements.

Once a company debuts on a public exchange via merger with the SPAC, it typically ditches the SPAC auditor. It either formally announces it’s sticking with its so-called legacy auditor—the auditor it used while it was privately held and waiting in the wings to go public—or it seeks a new one. Enter: the Big Four. This is a natural area for the largest firms to seek business, said Derryck Coleman, former director of research at Audit Analytics.

“Most companies going public, these are growth companies. So this is an opportunity for a client that will grow and will be larger business for the accounting firm,” Coleman said.

Going from private to public so quickly is where things can go wrong. A company may not have its internal controls up to snuff or otherwise be ready for regulator scrutiny when it hits the public market. The SEC’s top accountant warned as much in early 2021. Not all of those companies will be ready for prime time, Paul Munter said at the time.

“The younger the company, the greater the chance for a total meltdown,” said Jay Ritter, finance professor at the University of Florida, who studies initial public offerings.

In some cases, auditors quit particularly risky clients. PWC, the auditor of troubled electric vehicle startup Faraday Future Electric Inc., declined to stand for re-appointment as auditor in August. Faraday has had a spate of negative headlines, from SEC and Department of Justice investigations into its business to public statements from the company about death threats against board members. PWC declined to comment.

From Dazzling Debut to Dud

The vast majority of SPACs go public at $10 per share. Of the companies that went public via SPAC since 2020, more than 90% traded below $10 per share as of Tuesday, according to Bloomberg.

Only 28 companies—less than a tenth—trade above $10 per share as of Tuesday;; the Big Four audit more than half of them. More than a third of the companies have seen their stock price fall by more than half, trading below $5 per share. Almost 16% —52 companies —trade below $1, the threshold where they could get kicked off public exchanges.

Of the cellar-dweller companies, 25 are audited by Big Four firms, with Deloitte auditing 11 of them. Deloitte declined to comment. 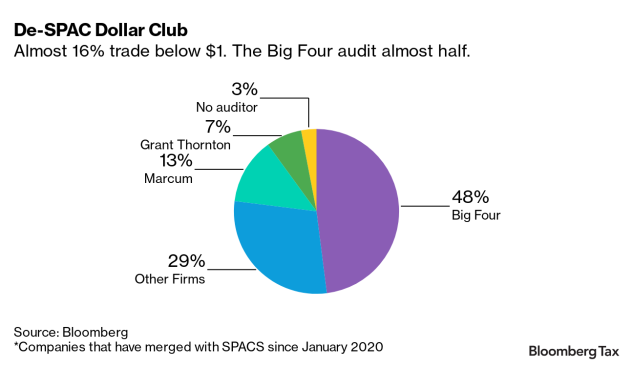 Electric truck maker Electric Last Mile Solutions Inc. went public in June 2021 and filed for bankruptcy one year later. Its non-Big Four auditor, BDO USA LLP, quit the company in February saying it was stepping down because the vehicle maker failed to remediate “potential illegal acts” within the company. The startup never got a new auditor on board before it filed for bankruptcy. The auditor for pharmaceutical company Clarus—RSM LLP—quit on Sept. 12.

Enjoy Technology, a mobile retailer started by a former Apple Inc. executive, went public in October 2021 and filed for bankruptcy in June. It was the only one of the three troubled companies audited by a Big Four firm: PwC.

— With assistance from Bailey Lipschultz and Annemarie Lyons of Bloomberg.