Ernst & Young is considering a split of its global audit and advisory businesses in part to remove roadblocks to growth for the advisory side.
Photographer: Tolga Akmen/AFP via Getty Images

The Big Four accounting firms increasingly rely on consulting and advising to drive their profits and boost partner paychecks, but it comes at a cost.

That resurgence of consulting—now the biggest slice of Big Four revenue—comes packaged with potential conflicts of interest that could threaten what was once their core business: the audit.

US regulators, alarmed that the outsized influence of that advisory work could undermine the job of auditors, are closely monitoring firms’ business deals. Ernst & Young has been exploring a possible split of its operations in part to fend off such ethics crackdowns, including a record $100 million settlement with the Securities and Exchange Commission for ethics violations.

“What happens when we essentially have a consulting firm who also does audit work—what does that do to say the firm culture?” said Stephen Rowe, associate accounting professor at the University of Arkansas and a former Big Four auditor. “It is problematic and the culture itself could deteriorate to the point where we could see large scale frauds again.”

Auditors serve as a check on management in order to deliver reliable financial reporting to the investing public. Those defenses crumbled under the weight of profitable advisory businesses at the turn of the century. Four of the largest firms, including Ernst & Young, split off those services before a series of accounting scandals forced Congress to reign in the industry and corporate reporting.

The ever-expanding roster of global advisory clients is now testing those 20-year-old safeguards meant to prevent the sale of lucrative work to audit clients.

Revenue from advisory work that ranges from supply chain strategies to installing technology platforms surged ahead of audit fees in the boom years that followed the financial crisis. As of last year, consulting comprised nearly half of the firms’ combined revenue.

Since 2010, revenue from consulting services has more than doubled while tax and legal fees have increased by 67%. The audit practice grew 24% among the four firms globally during that time, according to the data. 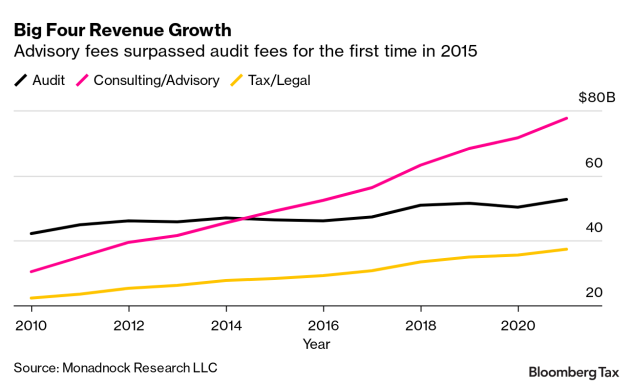 “It’s clear that the growth of consulting is significant compared to the growth in audit,” said Mark O’Connor, CEO and co-founder of Monadnock Research, which tracks the consulting industry. “It jumps right out at you.”

A steady supply of acquisitions, often of smaller players, have buoyed the four firms’ consulting revenue in areas like data, artificial intelligence, and marketing, O’Connor said.

EY expects its advisory line would generate $10 billion in revenue as a separate business. In comparison, the firm’s consulting practice brought in a nearly $16 billion last year. The firm did not respond to requests for comment.

But growing revenues at a similar pace might be difficult for a stand-alone consulting business. An independent audit practice—without advisory work limiting their client pool—could expand rapidly, however as companies looking to switch auditors may opt to hire a “pure play auditor,” he said.

In the wake of the Enron and WorldCom accounting scandals, Congress barred auditors from providing certain services to their clients—restricting the profitable consulting work that could taint their reviews and ensuring they don’t audit their own work. Today few US-listed companies hire their audit firms for services beyond tax and other assurance-related work, according to company-level fee data obtained from Audit Analytics.

Audits have steadily improved since the launch of the Public Company Accounting Oversight Board, the US audit regulator, twenty years ago. But the risks have shifted from what firms sell directly to audit clients to the full breadth of advisory services the firms offer, said Robert Knechel, director of the International Accounting and Auditing Center at the University of Florida.

With a management team more focused on the consulting business, the audit may not get the same level of attention, including investments in core systems and training, Knechel said.

Evaluations and compensation may shift how partners view their relationship with the client. Incentives for the auditor to “do the right thing” may fade, Rowe said.

The Big Four have built up extensive systems to track clients and their affiliates around the world to prevent the sale of restricted services to audit clients. Those systems also track the personal finances of their global workforces to comply with SEC and international ethics requirements.

Managing independence requirements for the firm’s 327,000 staff requires a “huge investment but it is an investment worth making, as we believe the multidisciplinary model is the best one to deliver quality audits for our stakeholders and the best experience for our people,” PwC’s global arm said in a recent statement to Bloomberg Tax.

Despite those processes and controls, audit firms must be concerned “whether or not it’s working if they are moving toward splitting off those businesses,” Paul said.

New ethics rules with new categories of prohibited services could be coming as independence rules also have not kept pace with the market growth or expanding lineup of consulting services the firms offer, he said.

SEC Chairman Gary Gensler said in late July that he wanted the PCAOB to bolster its independence standards and the board has added a project to update its requirements to its rule-writing agenda.

The SEC under the Trump administration took a lighter approach to ethics violations, relaxing certain conflict of interest rules. But a spat of recent enforcement cases—including EY’s $100 million penalty, its third in a year—makes clear that the pendulum has swung again at the Wall Street regulator.

Cracks in those compliance systems can be exploited. A PwC partner in the US named Brian Sprankle sold consulting work to audit clients, triggering a $7.9 million fine for the firm for concealing that work, mislabeling it as audit related. The US firm responded with additional checks, training, and policy changes.

Francine McKenna, a longtime critic of the audit industry, called Sprankle evidence of an auditor independence “epidemic.” “I think that there’s a lot more Sprankles out there,” she said.

McKenna, who teaches financial accounting at the Wharton School of Business, blames regulators for allowing the firms to regrow such massive consulting arms, which contributed to audit failures that led to the 2002 Sarbanes-Oxley Act.

“We’re right back where we started from,” she said.