is breaking ranks with peers on Wall Street by doing a deep dive into its business to see how it may have contributed to racial inequities in the financial system.

The world’s largest money manager plans to an independent racial audit of its operations, following a request from a shareholder. Companies including Airbnb Inc. and Facebook Inc. have taken similar steps in the past few years.

By contrast, Goldman Sachs Group Inc., Citigroup Inc. and Wells Fargo & Co. are asking shareholders to proposals calling on them to do such audits, saying they’ve already taken measures to address racial injustice. JPMorgan Chase & Co. and Citigroup even went as far as asking regulators to block the resolutions; their appeals were denied.

Outside of finance, also has asked its shareholders to reject a proposed racial audit of the company.

The calls for racial audits have emerged since last year’s social injustice protests in the U.S. and President Joe Biden’s recent signing of an to advance equality. The audits are conducted by third-party groups, which analyze companies’ business models -- from policies to products and services -- to determine whether they cause, reinforce or perpetuate discrimination.

The investors that filed resolutions for BlackRock and other financial-services companies -- Service Employees International Union and -- said the industry has played a key role in perpetuating the racial wealth gap. 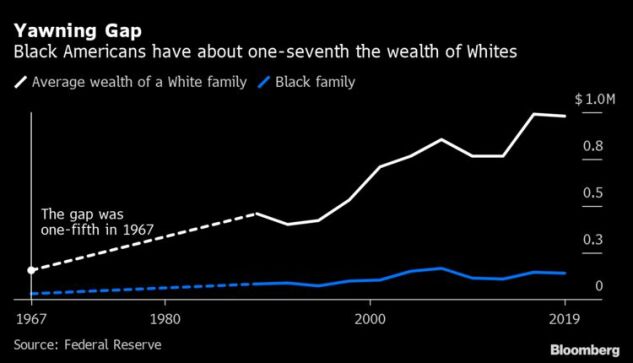 BlackRock, with $8.7 trillion of assets under management, said in a memo to employees Thursday that an external review of how its diversity, equity and inclusion policies impact stakeholders will provide useful feedback to assess its progress. The New York-based firm said it will start the audit in 2022.

SEIU said in its resolution, which has since been withdrawn, that BlackRock -- as an investor -- opposed most shareholder proposals in 2020 that were aimed at addressing racial-justice issues. That included two at Amazon.com Inc., which asked for disclosures about hate-promoting products and the impact of its facial-recognition technology on people of color. This year, Amazon.com has appealed to the U.S. Securities and Exchange Commission to block a racial-audit proposal.

In 2016, Airbnb was the first company to do a third-party racial audit after people of color said they were discriminated against as guests. Starbucks Corp. followed with an audit by former U.S. Attorney General Eric Holder following a 2018 incident where employees at one of its locations called the police on two Black patrons who were waiting for a business meeting. Facebook also has done a racial review.

Banks have said racial audits are unnecessary after several initiatives were introduced in the past year such as investing in Black entrepreneurs and expanding credit. CtW said the only way to effectively address racial injustice and economic inequality is to study how the industry’s products and services contribute to imbalances.

CtW said Monday it withdrew the proposal to after reaching an agreement. CtW said the bank will conduct an internal review of the diversity of its employees and senior leadership, and set up a meeting with shareholders before next year’s annual meeting to ensure equity for non-white stakeholders.

Morgan Stanley said many of the initiatives in CtW’s proposal were similar to those already underway or planned at the firm. They include an independent review of the global talent program, the creation of an Institute for Inclusion with an independent advisory board, and enhanced disclosures about the bank’s diversity and inclusion efforts.

Racial audit proposals also were filed with The company didn’t respond to a request for comment.

Bank of America Corp. has advised shareholders to vote against a racial audit, a decision that received support from Institutional Shareholders Services. By contrast, shareholder advisory firm Glass Lewis & Co. recommended investors vote for the audit.

“Given broad societal changes, it’s particularly important for consumer-facing companies such as Bank of America, whose operations heavily rely on their customers’ trust and loyalty, to address issues of racial equity,” Glass Lewis said last week.

Bank of America said last week that an audit is unnecessary given its progress on racial equality. The lender pledged in 2020 to spend over four years to combat racial and economic inequality.

(Adds details about Morgan Stanley in 11th and 12th paragraphs.)

To contact the reporter on this story:
in New York at skishan@bloomberg.net

To contact the editors responsible for this story:
at tquinson@bloomberg.net