Chinese authorities are preparing to give U.S. regulators full access to auditing reports of the majority of the 200-plus companies listed in New York as soon as mid-this year, making a rare concession to prevent a further decoupling between the world’s two largest economies.

The and other national regulators are in the process of drafting a framework that will allow most Chinese firms to keep their listings, people familiar with the process said, asking not to be named discussing a private matter. However, the government is prepared to accept that some state-owned enterprises and private companies that hold sensitive data will be delisted, they said.

The framework is expected to provide clarity on what data may trigger national security concerns, said the people. Regulators are debating whether companies that deal with consumer information, such as , would automatically fall into that category, one of the people said, adding that processing large volumes of such information wouldn’t necessarily make a firm a security concern.

If the plan proceeds, it would mark an unusual reversal by Beijing, potentially ending a decades-long dispute that escalated when the U.S. mandated a 2024 deadline for kicking non-compliant businesses off the New York Stock Exchange and Nasdaq. The compromise would also show China’s willingness to balance national security concerns with the needs of investors and businesses at a time when its economy faces numerous challenges. 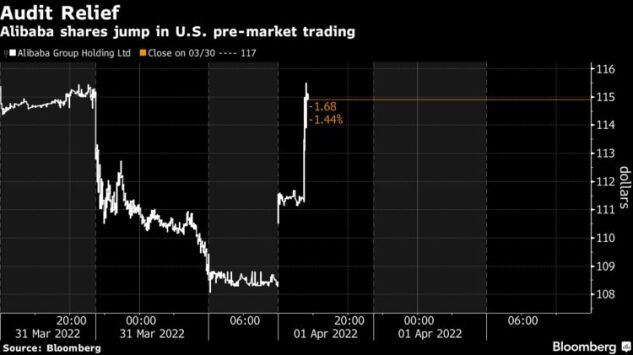 Details are still under discussion and may change, said the people, adding that it also needs sign-off from the top leadership. Chinese regulators hope to reach an agreement with the U.S. around summer, one of the people said.

Still, the CSRC has repeatedly struck a more upbeat tone about the possibility of a deal than its U.S. counterpart. Securities and Exchange Commission Chair this week tamped down speculation that a solution was imminent, signaling that only total compliance with audit inspections will allow the companies to keep trading on U.S. markets.

China could simply move a firm to a non-U.S. bourse if they want to shield financial documents, Gensler said in an interview. He also pointed out that the American law focuses on noncompliant countries rather than specific companies. So if one request is blocked, it means the requirement isn’t being satisfied.

The CSRC said in an emailed to Bloomberg News that regulators on the two sides are holding active talks on auditing cooperation and progress has been smooth overall, adding that all details of the negotiation will be subject to the public statements from both parties.

Washington and Beijing have been at odds for two decades over the mandate that all companies that trade publicly in the U.S. grant access to audit work papers. The issue prompted action on Capitol Hill at the end of the Trump administration, when American lawmakers required that non-compliant firms be delisted. The law is particularly threatening to companies based in China and Hong Kong because Beijing has refused to grant access to corporate audits, citing national security concerns.

China’s government has made overtures over the last few years to allow some U.S. audit reviews but the U.S. has stood firm with demands that American inspectors must be able to go into a foreign accounting firm and demand audits from all corporations that trade in the U.S.

There are more than 200 Chinese firms listed in the U.S. as American Depository shares, with a combined market capitalization of $2.1 trillion as of May 2021, including eight national-level SOEs, according to a report from the U.S. government. Nasdaq’s of companies listed in the U.S. has dropped by more than 50% over the past year.

The SEC last month published a “provisional list” of companies that could face removal. While the move had long been telegraphed, it fueled a sharp decline in U.S. shares of companies based in China and Hong Kong. The latest update to the list included , , Nocera Inc., iQIYI Inc. and CASI Pharmaceuticals Inc. All 200-plus firms are expected to eventually end up on the list unless an agreement is reached between the regulators.

The draft framework would also address the offshore listing approval process, including rules governing so-called variable interested entities, or VIE structure, one of the people said.

China sweeping regulations governing overseas share sales by its firms in December, taking one of its biggest steps to tighten scrutiny on international debuts in the wake of a controversial listing by Didi Global Inc. The regulations cast more uncertainty over the prospects for overseas initial public offerings, which had proceeded virtually unchecked for two decades and delivered billions in profits for U.S. investment banks.

To contact the editors responsible for this story:
at czachariahs2@bloomberg.net