Pandemic aid sent by the government to companies in 2020 is the type of assistance that would have to be disclosed in financial filings starting in 2022.
Jonathan Hurtarte/Bloomberg Law

After years of resisting, companies in 2022 for the first time will be forced to reveal in their financial statements how much money they get in breaks, grants, and government incentives. But don’t expect too many details.

The forthcoming accounting requirements are so narrow that few types of government assistance programs will be captured by the new rules. And some of the programs that would qualify — like the wave of pandemic aid that infused company coffers in 2020 — won’t exist when the requirements become mandatory.

“It might be very little that ends up getting disclosed by the time this gets published,” said Scott Ehrlich, president of Mind the GAAP LLC, an accounting advisory firm.

The Financial Accounting Standards Board expects to publish the rules in August so companies can prepare for the 2022 deadline. Businesses can apply the rules ahead of time, so some companies could voluntarily report details on some of the coronavirus relief funds that helped them through the pandemic, said Angela Newell, national assurance partner at BDO USA LLP.

“It’s not technically effective until after all these programs have run their course,” Newell said. “The hope is that companies will voluntarily make those disclosures.” 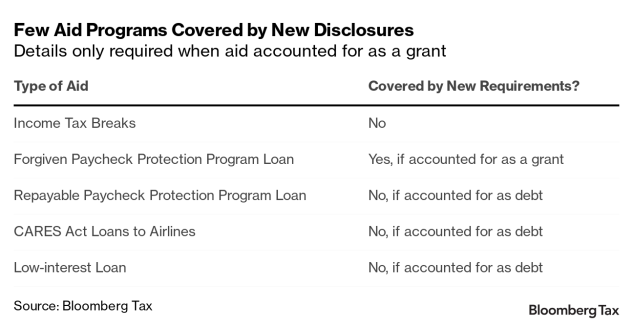 States, municipalities, and the federal government regularly offer companies incentives to create jobs, build new headquarters, or make a certain product. Unlike international accounting rules, U.S. generally accepted accounting principles (GAAP) don’t require companies to say they’ve received any money or what promises they made to get it.

The new rules will require that companies describe in the footnotes of their financial statements the nature of the assistance received, how they accounted for it, which line item in the balance sheet or income statement was affected, significant terms, and the duration of the agreements, among other details.

But here’s the catch: They will only have to spell out these details if they decided to recognize and measure the aid, to start. And there are no requirements for companies to do so.

This created problems during the pandemic, as the government gave billions in aid to businesses, and accountants struggled to figure out how to communicate the value of the aid in business financial statements. The American Institute of CPAs came up with nonbinding guidance to help companies wade through the confusion.

Under FASB’s forthcoming requirements, if a company accounted for the aid by following ASC 958-605, an accounting rule that applies to grants for not-for-profit organizations, or if it looked to the international guidelines on government aid spelled out in IAS 20, it would be required to disclose details.

But if the aid ultimately gets recorded as debt, as outlined in ASC 470, companies don’t have follow the disclosure requirements because there are separate rules governing debt that companies have to follow, anyway. And if the aid comes in the form of income tax breaks, those details don’t have to be included either.

“For FASB to be ignoring tax breaks is literally to be ignoring the bottom of the iceberg,” LeRoy said. “They’re turning a blind eye to the big bucks, and that’s the problem.”

FASB members in approving the plan acknowledged the limitations of the new rules and admitted they are a much watered-down version of a proposal the board issued in 2015. That proposal was almost universally slammed by business.

It would have required businesses to reveal details about many more types of government aid, including tax breaks. The effort was so unpopular that it looked like it would go nowhere. But then came Covid and a massive wave of government aid, and the lack of accounting guidance frustrated investors and analysts.

Whittling down the proposal to cover the immediate need—details on pandemic relief—was likely the only way to get something on the books, said David Gonzales, vice president at Moody’s Investors Service.

FASB also may revisit the requirements later. The board on June 24 asked the public to weigh in on whether it should tackle a slate of potential accounting improvements, and government assistance was one of them.

While many companies during the pandemic voluntarily disclosed that they’d gotten aid and how much, the lack of accounting requirements meant it was hard to figure out when a company recognized the cash and its impact on their earnings. FASB’s forthcoming requirements help to connect the dots, Gonzales said.

“It is meant to cure a worst-case scenario of companies being non-transparent about their support,” he said. “It helps with that. It does not help everyday analysis of government support and how that affects ongoing operations.”