At the end of 2019, as the biggest change to bank accounting loomed, bankers took comfort in one fact: they’d at least get to overhaul how they calculate losses on loans during a stable, relatively predictable economy.

The economic upheaval strains the calculations large publicly traded banks like JPMorgan Chase & Co. and Bank of America Corp. made at the beginning of the year on how the current expected credit losses (CECL) accounting standard would affect the reserves they record to cover future losses on loans.

The result: those reserves could creep higher. And if the uncertainty continues, it could inject volatility into their earnings from quarter to quarter.

“All CECL says is, ‘think about these things when you set your reserve’,” said Financial Accounting Standards Board member Harold Schroeder. “It’s probably higher than it was a month or two ago when we weren’t planning for, basically, a global shutdown of everything.” 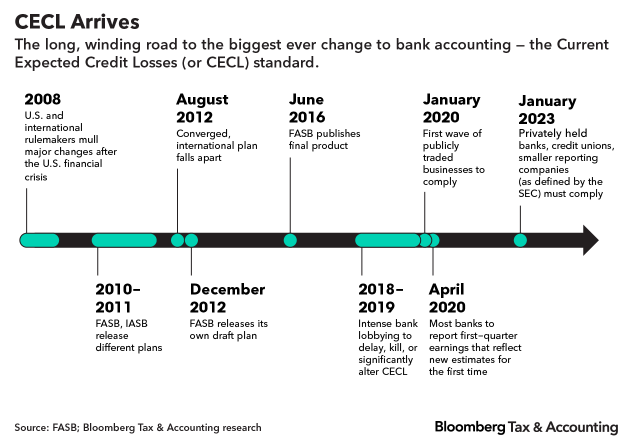 Published as the accounting rulemaker’s chief response to the 2008 financial crisis, FASB’s sweeping credit losses accounting overhaul has judgment baked into the rules. It requires banks and other businesses to look to the foreseeable future, consider what happened in the past, and evaluate current conditions to come up with a credit losses estimate that, in theory, better reflects economic reality.

The accounting change applies to all businesses that extend credit to customers—the likes of General Motors Co. and Harley-Davidson Inc. have told investors to expect changes—but banks will see the biggest impact.

It eliminates much-criticized accounting rules that essentially only let banks look in the rearview mirror when tallying their losses. Those rules came under fire in the lead up to the crisis, when bank balance sheets appeared healthy even though most saw deep losses on the horizon.

The effect of the rule change on banks is real. While the day-one impact—the effect of resetting Jan. 1 credit loss calculations from old accounting rules to the new—gets recorded as a change to equity, ongoing quarter-to-quarter changes hit earnings. There are already plenty of eyeballs on bank earnings during the upheaval from Covid-19 and disruptions in the oil market. An accounting rule change that could lead to spikes in expected credit losses and ding earnings further, adds up to lots of questions.

“If you thought of uncertainty as a big sandwich, this is one more layer of the sandwich,” said Christopher Marinac, director of research at Janney Montgomery Scott.

Most big banks gave estimates at the beginning of the year of what they expected the day one impact of the accounting rule would be. The outlooks varied based on the type of customers they lend to and the banks’ individual outlooks for the future. Zions Bancorp, which deals heavily in high-quality, low-loss commercial loans, reported an expected impact of less than $1 million. Ally Financial Inc., which mostly originates auto loans, said it would have to increase its reserves by $1 billion.

“We’ve noted many times in the past that we expect our allowance to become more volatile under the new CECL process as it is now subject to economic forecasts that may move materially from quarter-to-quarter,” he said. “Therefore, our day one impact in the allowance for credit losses, which will be set at March 31, 2020 may be materially different.”

“Banks are scrambling right now; trying to figure this out on the run is tough,” said Fred Cannon, director of research at Keefe, Bruyette & Woods. “We expect many, but not necessarily all of them, to take into account a diminished prospect for the economy in their quarterly number.”

Beyond the impact of the accounting in the marketplace, banks—and their auditors—have to wrestle with some fundamental questions about the accounting change before they put their pencils down on March 31, when the first quarter of 2020 ends.

A key piece of CECL is that businesses must make a “reasonable and supportable” assessment about the future when they tally expected losses. The uncertainty about the coronavirus could throw what they previously thought of as reasonable out of whack. In many cases, the forecast will get shorter, said Graham Dyer, partner in the accounting principles group at Grant Thornton LLP.

Banks should be careful not to double-count the effect of the coronavirus, he said. Many banks may already have factored drops in the GDP or potential spikes in unemployment into their predictions. Banks and their auditors will have to carefully assess whether they need to layer on another risk when they make the final calculation.

Banks tested out various scenarios in the run-up to Jan. 1 and weight them based on what they think will happen. They may have a baseline scenario and one or two scenarios that takes a declining economy into effect. As they approach the close of the first quarter, they’ll put more weight on the scenario that considers a less favorable economy.

The uncertainty means everyone gets a crash course on the foundation of the new accounting rules.

“The point of the standard was to align accounting with changes in risk,” FASB’s Schroeder said. “We’re seeing it firsthand.”