Cincinnati CPA David Lowry transformed his small firm overnight to help his clients apply for emergency loans available through a federal Covid-19 relief program, preparing 27 of them worth $4.5 million in the span of a few weeks.

For his efforts, federal guidance says he was entitled to as much as a 1% commission from lenders, something that he said was “very clear.” But that didn’t happen—not for him, not for many other CPA firms across the country—who are still waiting to be paid.

In dozens of lawsuits that have been filed over the last three months, accountants along with lawyers and consultants say that banks and other lenders refused to even consider paying the fees. Others said they would, but never included a spot on the application form where the borrower could state who their agent was.

The disputes, which could stretch on for years, center on federal guidance for the hastily rolled-out program and whether small business advisers had to establish a formal relationship with the lender in order to collect any fees and what Congress intended when it suggested they could be paid along with the banks for their efforts.

David S. Lowry, CPA, Ltd. is among roughly 30 small accounting firms who have lined up to sue some of the largest companies in the nation. In all, nearly 200 lenders, including small, community banks and credit unions, have been named as defendants in at least 60 cases.

The agents say they are owed $20,000 on average. And many likely would have qualified for the Paycheck Protection Program, the loan program created by the CARES Act to provide economic relief to U.S. businesses in March.

“That’s the difference between making payroll and not making payroll,” said Michael Adler, a lawyer representing several of the agents, including Lowry.

The lawsuits target many of the largest PPP lenders including JPMorgan Chase Bank N.A., which declined to comment, but pointed to its court pleadings. The bank has argued in court filings that the accounting firms did not comply with existing Small Business Administration regulations that require agents to reach an agreement with the lender first and to share any compensation agreement with the federal agency—rules intended to prevent fraud.

“Any notion that lenders must immediately pay agent fees to any person who simply claims to have assisted borrowers obtain PPP loans finds no support in the CARES Act, the SBA’s regulatory scheme, or any other authority,” the bank’s lawyers argued in its bid to consolidate some of the cases.

According to the SBA, JPMorgan issued more than 277,000 loans totaling $29 billion—the top PPP lender in the country. 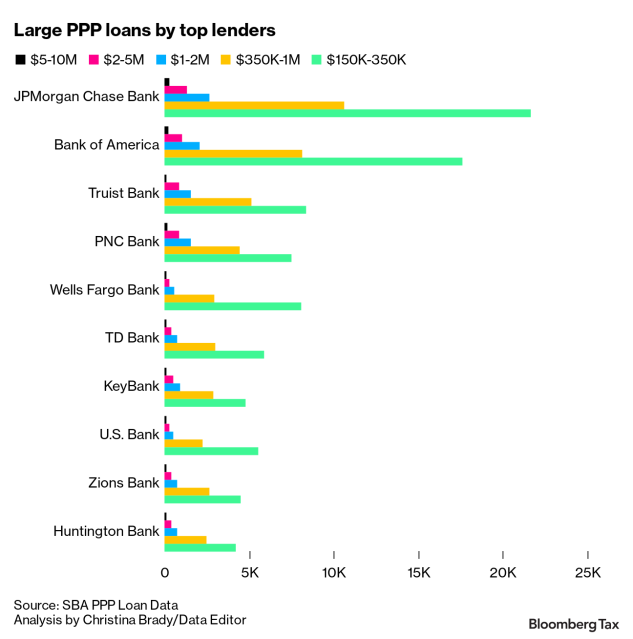 Combined, the banks named in the suits processed at least 1.9 million loans, according to a Bloomberg Tax analysis.

Under the PPP rules, banks can earn fees between 1 to 5% depending on the size of the loan. Nationwide, those fees will amount to billions of dollars—revenue that will cushion bank earnings amid an economic downturn and an ongoing pandemic.

“We take great pride in putting people over profits and helping businesses when they need it the most,” Bailey’s statement said. 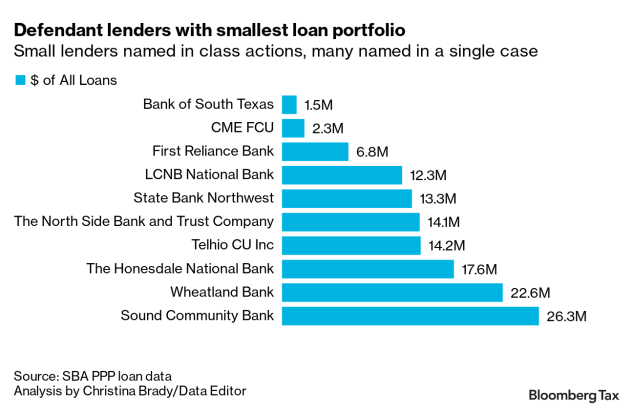 Both the American Bankers Association and Independent Community Bankers of America, in a July letter to the Department of Treasury and the SBA, requested clarity about when the agent-bank relationship began and how to identify legitimate agents.

“If they had come out with this clearly at the beginning and stated how the agency relationship was to exist, be established, then I would think we wouldn’t have this litigation,” said Chris Cole, senior regulatory counsel for the ICBA, the industry lobbyist for small, community lenders.

Still some financial institutions have offered to pay up rather than go to court.

Cole said he knew of one ICBA member institution that opted to pay a few thousand dollars in agent fees to avoid a costly legal fight.

Regions Financial Corp., which also declined to comment, said in a court filing that it intends to pay the agent fees, but cannot do so until it receives the money it’s owed from the federal government.

It’s a legal fight that could drag on for years. The accountants, lawyers and others are raising their hand to object now in hopes of grabbing the attention of lawmakers—Congress could intervene, clarifying its intent to include agents in the PPP pie, said Thomas Cooke, who teaches business law at Georgetown University.

He called the cases a significant test of both the intent of the law and the role of the SBA. The legal challenges pit some of the smallest CPA firms in the country against banks with who stand to make a windfall on their PPP loan portfolios—offering a classic example of where plaintiffs pooling their resources together as a class would be appropriate, Cooke said.

Allan Koltin, who coaches accounting and law firms on how to run their business, called it a sound practice for agents to have spoken to the bank first about the fee and to get it in writing that the bank would pay.

That was also the advice that accounting’s largest professional group, the American Institute of CPAs, offered when questions about the fees cropped up in April. The AICPA also encouraged firms to focus on building their brand and relationships, suggesting firms not charge clients for the work.

“This was brain surgery and it was around the clock. It’s the highest level of advisory service an accountant could provide: saving a business and having a gun to their head,” Koltin said.

Lowry, the accountant from Ohio, dismissed the AICPA’s advice saying it came too late in the game to be useful. The regulations clearly said that borrowers were not to be charged anything for his services and that the bank would compensate the agent for his or her work, he said.

“That wasn’t going to help all my friends’ businesses survive for me making sure that I’m getting my fee from them. This was the only process we had, was to read the statute, believe that we are supposed to get the fee, and help our clients,” he said.

The agent fee amounts on many individual loans are tiny—Sport & Wheat CPA PA, near Pensacola, Florida, said they are owed $942 for an engineering client. Prinzo & Associates LLC in the suburbs of Pittsburgh is owed just $136 for one client. Ratcliffe CPA Firm PC, with offices in South Carolina and Illinois, expects to receive fees of $637 for a client’s loan and $1,247 for another.

For Aaron Sims, among the plaintiffs who are not accountants, there’s little financial reward in pursuing his lawsuit. His intent is to stand up for the borrowers he worked with—90% were minority-owned businesses or in the non-profit sector. They didn’t have a CFO or an accounting firm on retainer to turn to; they found Sims’ boutique cash management and brokerage firm in Chicago instead.

Eliminating compensation for advisers like Sims only further disadvantages small, under-privileged borrowers who had few resources and would have lacked access to his services otherwise. .

“Not only is it not right, but it’s not fair,” he said. “This is another layer that they are going to have to fight through to come to the table.”