Crypto companies that have been trying to go public since last year’s boom remain stuck in a lengthy back-and-forth with US regulators, adding to the pile of challenges facing the industry.

Bids to merge with blank-check companies are getting scrutiny from accountants at the because the asset class raises fresh bookkeeping issues, according to people familiar with the matter. Dates for closing multibillion-dollar deals involving , a stablecoin issuer, and exchanges run by Bullish Global and have all been pushed back multiple times.

While the SEC has been stepping up oversight of all deals involving special purpose acquisition companies, the delays are particularly fraught for virtual-coin companies already reeling from a steep market downturn. The total market value of cryptocurrencies has plunged to less than $1 trillion from $3 trillion in November amid high-profile blowups and a rise in interest rates that’s sapped demand.

“This is just another brick in the obstacle wall that has been steadily constructed by the SEC to impede crypto developments,” said , chair of Katten Muchin Rosenman’s financial markets and regulation practice.

In some cases, the regulator now takes twice as long to review paperwork from firms in the crypto industry as they do for other sectors, according to data and research provider SPACInsider. The SEC declined to comment. 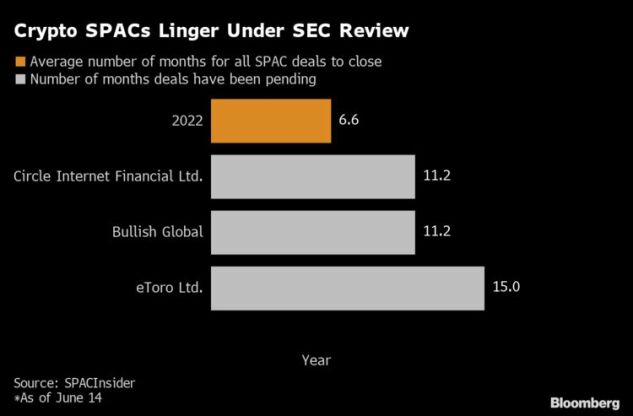 The SEC doesn’t technically approve deals, but sponsors are loathe to finalize a tie-up until the agency is satisfied. That means that even for those involving more vanilla companies, the back-and-forth over investor disclosures can go on for months.

Bitcoin for nine straight days, falling as much as 8.6% on Wednesday. The world’s biggest cryptocurrency was down 2.3% at 4:20 p.m. in New York.

Topsy-turvy markets can create new risks that companies must disclose to investors and lead to prolonged discussions with regulators. For crypto, another major sticking point has been accounting guidance that the SEC . To satisfy the agency, firms must count assets they’re safeguarding for customers as liabilities on their balance sheets.

It’s standard for the SEC chief accountant’s office to get involved in the review process when businesses raise new accounting issues, said one of the people familiar with the matter who asked not to be named discussing the agency’s internal procedures.

Successfully navigating that process with the regulator is crucial for SPAC sponsors who generally must complete a deal within two years.

Bullish Global revised its paperwork for a sixth time on May 31, and now has until July to close its SPAC deal that last year was valued at $9 billion. Trading platform eToro, which has until June 30 to complete its SPAC deal that’s been valued at $8.8 billion, is studying the accounting guidance, a spokesperson said. Bullish Global declined to comment beyond its filings. Last month, Circle updated its accounting in the latest amendment of its SEC registration statements to reflect the SEC’s guidance.

“We appreciate that the SEC is being thorough as they navigate fairly novel businesses that want the trust, transparency and accountability that come with being a public company,” Circle said in a statement. The in February that the terms of its planned merger changed and the value of the transaction had doubled to $9 billion.

Since taking over as head of the agency in April 2021, Gensler has frequently raised concerns around crypto and SPACs.

In March, the SEC proposed sweeping rule changes for all blank-check companies. That proposal would tighten oversight of the market, require more disclosure about potential conflicts of interest and impose new responsibilities on banks underwriting the transactions. Since then the once white-hot SPAC market has cooled significantly with underwriters including and have distanced themselves.

While some have applauded the SEC’s plan to crack down on SPACs, others on Wall Street are pushing back. The specter of increased legal liability for banks underwriting the transactions emerged as a particular sticking point in comment letters filed with the regulator this week.

Of 14 total crypto-related SPAC deals announced since 2019, only five of have closed, according to SPACInsider.