When Darrell Groves started his first job after college, there were just a handful of other black accountants at KPMG’s office in Houston.

One was a partner in the practice who served as a mentor to Groves. She, too, had been involved in an extended internship program that Groves participated in through high school and college, introducing him to the world of a Big Four accounting firm.

Those experiences served as the foundation of a career that quickly led to a corporate job and later the launch of Grove’s own tax and accounting firm, which today features a staff of 11 who reflect all of America’s major racial groups: white, Hispanic, Asian, and black. That diversity gives clients the chance to seek an accountant who looks like them or prefer to communicate with his Spanish-speaking colleagues.

But the number of black accountants drops off significantly in the much smaller subset of certified public accountants. Out of 650,000 CPAs in the U.S., an estimated 5,000 are black, according to the National Association of Black Accountants (NABA).

The number of black accountants has changed little in the past two decades while the number of their Asian and Hispanic colleagues has grown to more than 12% and 7% of the field. Still, the profession remains overwhelmingly white and male. And on top of that, retention and promotion of black accountants remains a struggle, further complicating the overall picture.

“There is still a lot of work to be done,” said Groves, who serves on the board of the Texas Society of CPAs along with its diversity and inclusion committee.

Minorities continue to be under-represented in leadership roles despite their growing ranks among accounting graduates and new hires, he said.

“That’s the inclusion part that is still lacking. We don’t have enough people sticking around or growing within these larger firms,” said Groves, managing director at DWG CPA PLLC.

Walter Smith, president and CEO of NABA, said the goals of the group’s founders, to diversify the profession and provide opportunities for black accountants, remains a work in progress.

“The upside opportunity here is that even overcoming all the obstacles and barriers over the first 50 years, we fully realize and appreciate as we celebrate that it is not our destination,” Smith said. “It is very much a part of our journey.”

In the 50 years since the group was founded, the total number of black CPAs has grown. More black accountants are entering the profession. The largest firms and corporations recognize the importance of supporting and attracting a diverse workforce.

But the real work in 2019 is the retention and promotion of black accountants, Smith said.

Minority professionals are heavily recruited. If they don’t feel welcomed or see people who look like them, they are more likely to go elsewhere, said Steven Harris, a St. Louis accountant who chairs NABA’s board of directors.

They need people advocating for them and helping them to build relationships. The support helps them to navigate that business’ corporate culture. They need an environment that encourages them to stick around, Harris said.

At each career step, the rate of participation among black accountants drops, according to the 2017 American Institute of CPAs demographic trends report: 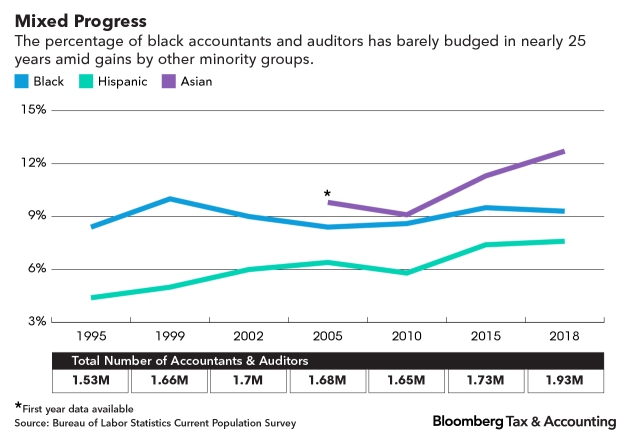 As Carolyn Smith joins the Governmental Accounting Standards Board, she recognizes the platform that her appointment as the first black woman to the national standard-setter provides. And she plans to step up when asked to speak, write, or act as mentor. Her term began July 1.

“I’m very well aware of this new leadership role that I am in. And I just want to take advantage of it and sell the message that this is a great profession,” Smith said. “We have to do a better job of selling it.”

As a hiring manager—she is the chief audit executive for Columbus City Schools in Ohio—she has struggled to recruit a diverse staff.

Attracting candidates with the right certifications to work for local government is a challenge. But searching for a minority candidate narrows the pool even further, she said.

To combat that, she has hired employees who were still working toward their certification with the agreement that she would help pay for the requisite training to earn that credential. Employers must be creative to attract and retain a diverse workforce, she said. 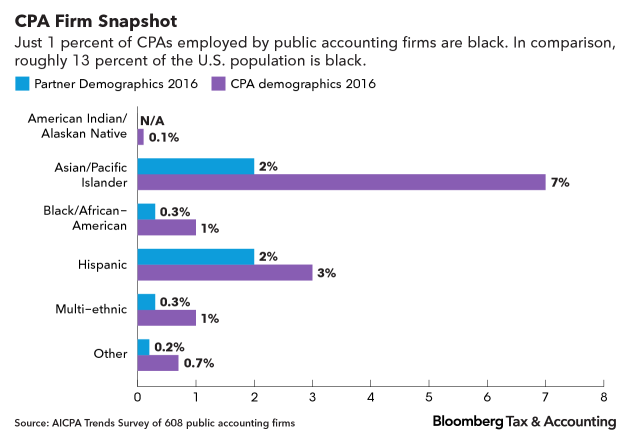 The American Institute of CPAs has been committed to diversity for years, starting with a resolution 50 years ago stating that accounting leaders supported a diverse workforce. In the intervening decades, there have been reports, internships, scholarships, and other efforts by the firms, all targeting that goal.

Today the culture at the firms and the tone set by leaders is a top focus for the AICPA. A simple pledge has proven to be a wake-up call for firm leaders and executives, said Kim Drumgo, the AICPA’s director of diversity and inclusion.

PwC LLP Chairman Tim Ryan created the CEO Action Pledge in reaction to the shooting death of Botham Jean, an employee in the firm’s Dallas office, in 2018. Leaders who sign on commit to having difficult conversations about race and diversity to address unconscious bias in the workplace—and to share lessons learned with one another.

And it seems to be working, Drumgo said.

It has freed workers to have conversations about the different perspectives employees bring to their work and how those points of view affect feedback they give or receive, their individual career development, and growth—even their fears and worries, she said.

That honest dialogue is an important step toward changing the culture of a firm and helps build a sense of belonging.

“For those individuals who are the only one, the only woman at the table or the only minority at the table, belonging becomes increasingly important,” Drumgo said.