The four biggest financial institutions booked giant losses in the second quarter under new accounting rules—all without a wave of loan defaults or foreclosures due to government relief payments.
Photographer: Andrew Burton/Getty Images

The nation’s largest lenders booked giant losses in the second quarter—all without a wave of customer loan defaults or home foreclosures.

That’s on purpose. New accounting rules that went live in January force banks to capture losses before those losses catch them by surprise. At a time of 11% unemployment, rising coronavirus cases, but government stimulus money propping up the economy, banks are bracing for the worst even though it hasn’t happened yet.

The credit lossaccounting overhaul was supposed to make it easier for analysts to understand banks’ outlooks for the future. But the mix of doomsday scenarios and yet few on-the-ground losses makes for a confusing earnings season as banks struggle to make estimates with the conflicting information they have.

“People are just guessing,” said Paul Noring, managing director at Berkeley Research Group. “There’s math associated with it and people are trying to model things and look at things, but the traditional ways that they have come up with it are just not working.”

The four biggest financial institutions—JPMorgan Chase & Co., Wells Fargo & Co., Bank of America Corp. and Citigroup Inc.—painted at what first blush appears to be a worst-case scenario, setting aside a whopping $33 billion combined for looming losses. But those loss projections are based on different data across the institutions. 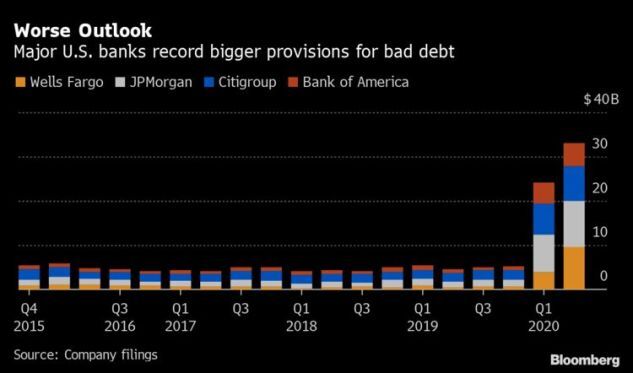 Published as the Financial Accounting Standards Board’s main response to the 2008 financial crisis, the current expected credit loss (CECL) accounting standard requires businesses to look to the future, consider past experience, and assess current conditions to come up with potential losses versus waiting until customers miss payments to book them.

This game-changer accounting method had its unfortunate debut during a global pandemic. The first quarter was tough for banks, which were about two weeks in to widespread stay-at-home orders by the time they closed their books on March 31. But this quarter, with even more uncertainty about the future, has been an even bigger challenge.

Banks spent years gearing up to implement the standard. Many of the models banks developed to estimate future losses use factors like unemployment as a way to gauge what’s coming down the pike.

When people lose their jobs, they typically fall behind on car payments and mortgages. But stimulus checks, government business loans, and beefed-up unemployment benefits have staved off that financial pain.

“Right now, we are seeing nothing that is consistent with an 11% employment rate in the actual consumer payment behavior,” Bank of America Corp. CEO Brian Moynihan said on the bank’s July 16 earnings call.

“If you really just use unemployment or GDP growth as a main driver, the actual reserve levels would have gone even exponentially higher than where they are today,” van Roosmalen said.

While FASB and regulators have warned repeatedly that credit loss estimates aren’t supposed to be a best-case or worst-case scenario but rather a best estimate using all available evidence, an inherently judgmental rule has wiggle room.

“Some companies are going to take a conservative view, some take an aggressive view ,and some take a down-the-middle view, all of which are defensible under the standard,” said Jeffrey Johanns, senior accounting lecturer at the University of Texas McCombs School of Business.

In some cases, it pays to be conservative. If a bank overestimates losses, it shrinks its earnings in the short term, but its reserves absorb the losses when they happen. If those losses don’t pan out, the bank can reduce that pot of money or “release” it into earnings.

“If they’re going to deliver a surprise to the market, they want it to be a positive one,” Johanns said.

The provisions banks set aside to cover losses are an expense against net income, and the numbers matter.

When a bank increases its provision, it sends key details about how pessimistic or optimistic it is about the future, said Saul Martinez, managing director at UBS.

“It helps us think about the ways the banks are gauging the potential outcomes and the potential losses,” Martinez said. “Whether they’re right or wrong, who the heck knows.”

JPMorgan Chase & Co. booked a $10.5 billion provision, more than $2 billion more than it set aside the previous quarter. Its executives told analysts on the bank’s July 14 earnings call that it weighed a variety of scenarios but leaned in heavily to the downside outcomes to come up with its number. CEO Jamie Dimon said the bank took a more conservative approach to what Federal Reserve and others believe might be the “base case” economic scenario that ultimately shakes out.

Investors will have to be on the alert in future quarters for earnings boosts driven by banks adjusting their forecasts and releasing reserves, Martinez said.

“It’ll be interesting in ’21 or ’22, if this plays out and earnings are really buttressed and supported by reserve releases,” Martinez said. “Are investors going to value that investment stream at a high multiple? Or will they be seen as lower quality earnings?”