Add one more headache to the list of problems businesses face as they apply for government loans to keep them afloat: accounting for them.

No section of U.S. Generally Accepted Accounting Principals (GAAP)—the giant rulebook that covers how to tally almost every line in a company’s financial statement—captures accounting for the forgiveable government loans offered in the third coronavirus relief package (Public Law 116-139) President Donald Trump signed into law in late March. With the clock ticking toward the close of the second quarter, accountants are scrambling for guidance on the Paycheck Protection Program and other relief offered by the CARES Act.

“Is it effectively debt or some kind of liability? Or is it effectively a grant? That is the fundamental question at hand,” said Dan Noll, director of accounting standards at the American Institute of CPAs.

The difference matters. A debt could make a company look more leveraged; a big-dollar grant could give its balance sheet a temporary boost. The Financial Accounting Standards Board has received several questions over the past few weeks on how to account for loans, credits, and grants. It also is fielding questions about how bank lenders who issue the loans account for the fees associated with them.

The AICPA is drafting a question-and-answer document to help companies wade through the accounting decisions. FASB staffers said they are working with the AICPA on crafting answers.

There are several potential paths companies could follow to account for the Paycheck Protection Program loans, which must be used to keep workers or make mortgage, lease, or utility payments. The CARES Act provided $349 billion in funding for these loans and Congress on April 24 approved an additional $310 billion. 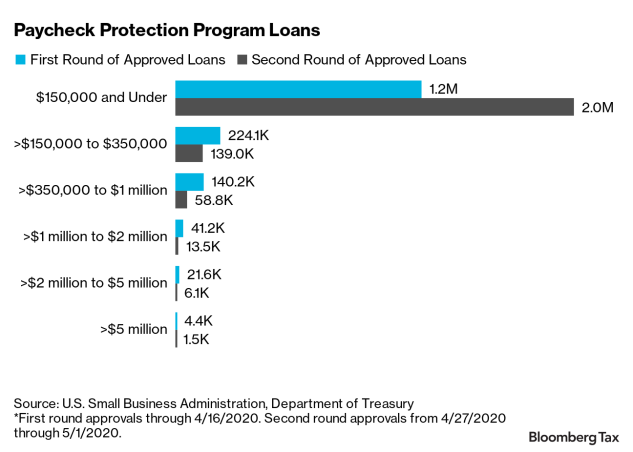 Deloitte & Touche LLP and Ernst & Young LLP late Friday put out alerts trying to weed through the noise. If a company accepts a loan and realizes they may not meet the criteria to have them forgiven, they could account for them as debt under ASC 470. If the debt gets forgiven, they’d follow guidance in ASC 405-20 for debt extinguishment, the firms said.

But this may not fit the bill perfectly, either. In some cases, businesses will have to look overseas and analogize to International Financial Reporting Standards, the international accounting rules set by the London-based International Accounting Standards Board. IAS 20 includes guidance on accounting for government grants and require disclosures about government assistance. There is no similar standard in the U.S.

In some cases, companies may be able to apply accounting rules for contributions that not-for-profit groups typically follow, EY said. They also could follow separate rules in ASC 450-30 for gain contingencies.

Multiple accounting options means companies have to be clear in what they disclose to analysts and investors. EY said businesses should include information about participation in the loan forgiveness program in their financial statements and how it affects liquidity and any other details that help convey its financial condition.

As questions swirl on the technical accounting for these programs, the analysts and investors that scrutinize company financial statements also are clamoring for clarity.

Many companies have discussed in earnings releases and in 8K forms some of the loans they’ve received from the government so far, as well as the separate payroll tax credits they’ve received via the CARES Act.

But there’s no requirement to do so and the disclosures are inconsistent, said David Gonzales, senior accounting analyst at Moody’s Investors Service. Scattered, piecemeal details about what could be big money makes it hard for analysts to understand company-to-company performance.

“It’s a reasonable expectation there will be material government support running through some private and some public companies and we will have no assurance on getting consistent information,” Gonzales said.

FASB, which sets U.S. accounting rules, has no rules for tallying incentives, tax breaks, and other forms of government assistance. This means some companies voluntarily report some information, while others report nothing at all.

FASB in 2015 released a proposal that would have made businesses disclose details about grants, tax breaks, and other forms of government assistance so investors and analysts could figure out how much money is tied to promises the company makes about new jobs or warehouses to receive breaks from the government.

The proposal drew stiff opposition from companies. The board has not discussed it since February 2019. FASB still considers it part of its active agenda, however, a FASB staff member said.

But without required disclosures, analysts are in the dark, Gonzales said.

“It is one of the more uncertain times for users of financial statements, ever, and there’s no consideration to getting them information to get through this,” he said.