PepsiCo Inc. is among the companies that could see its book value shrink into negative territory under a proposed change to goodwill accounting.
Photographer: Justin Sullivan/Getty Images

A plan to overhaul how companies account for goodwill would shrink more than a third of the book value of the S&P 500 and could push such household names as CVS Health Corp., IBM Corp., and PepsiCo Inc. into negative equity, a Bloomberg analysis shows.

Goodwill is all that separates 89 of the 500 top companies from a negative book value, where a company’s liabilities would exceed its assets, according to Bloomberg data. Book value is a fundamental method of valuing companies, though its utility has been questioned in recent years for failing to capture the value of intangibles and intellectual property, among other items.

U.S. accounting rulemakers are considering allowing public companies to amortize, or write down in steady chunks, the goodwill they record when they buy another business. The Financial Accounting Standards Board plan would eliminate two-decade-old rules that require companies to keep the asset as a line on their balance sheets forever, only marking it down when there’s a sign it has permanently lost its value. Under the draft plan, companies would still have to test for impairment, but the calculations would be much less frequent because the balances would be shrinking, anyway.

Whittling down goodwill in tidy increments would be easier for companies and their auditors. But for the S&P 500—full of businesses that grew by gobbling up smaller enterprises or acquiring competitors—big numbers are at stake. About $3.7 trillion worth of goodwill sits on company balance sheets, with AT&T Inc. holding the most: $133.2 billion, according to Bloomberg data in the most recent quarter of companies that disclose goodwill balances 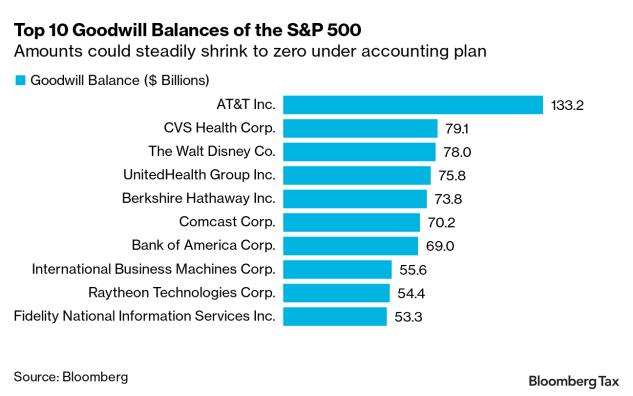 Big Asset on the Books

Companies record goodwill when they buy or merge with another business. The non-cash asset represents items like the purchased company’s brand name, its customer base, and the potential for the new business to make money. The S&P 500 companies with the largest goodwill balances make sense. The chart topper, AT&T, acquired Time Warner Inc. in 2018 and DirectTV in 2015. CVS Health Corp. merged with health insurer Aetna Inc. in 2018.

The bigger the amount of goodwill, the bigger the impact of amortizing that number, which would require steady dings to the asset’s value. Those persistent hits to goodwill translate to yearly, non-cash drags on earnings. Investors most likely would have to back out those hits from their analyses, said Ron Graziano, managing director, global accounting and tax research at Credit Suisse Group.

“It does matter. It’s going to shake up investor models,” Graziano said.

For the companies with the largest goodwill balances in the S&P 500, goodwill makes up a slice of their total assets. It makes a bigger portion of their equity. For CVS and IBM, their goodwill is larger than their equity. 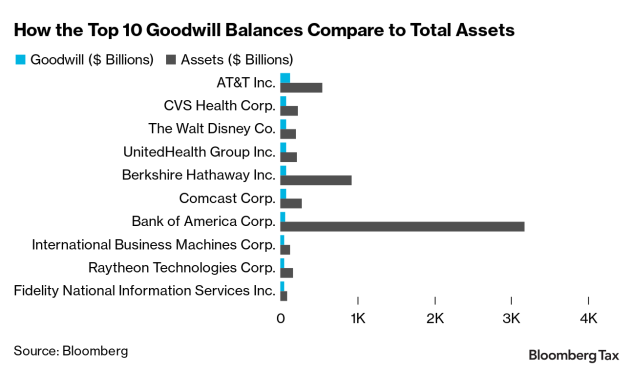 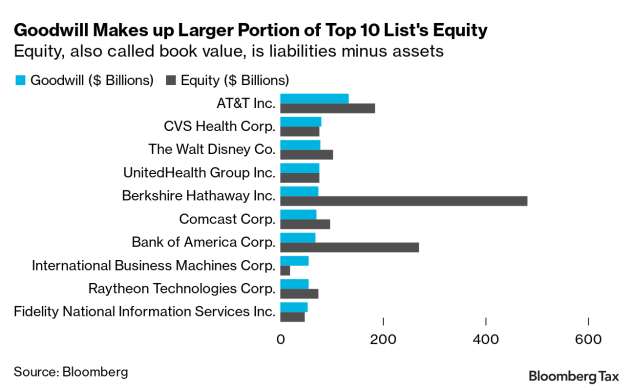 The S&P 500’s $3.7 trillion worth of goodwill makes up less than a tenth of the $44 trillion in total assets the companies hold on their books, according to Bloomberg data. 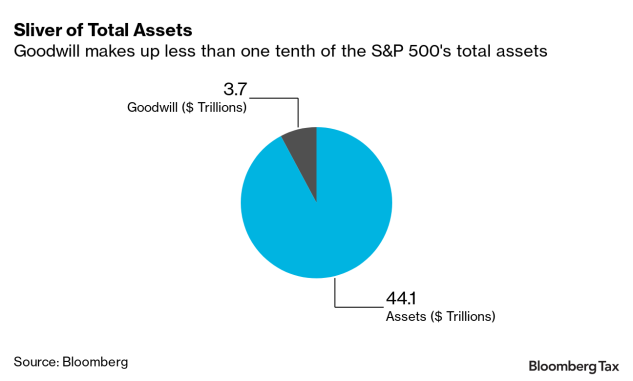 Goodwill relative to equity is more striking; out of the book value of the S&P 500, goodwill represents more than one third of it.

The accounting for goodwill is tricky. FASB has tried three times since 2011 to simplify the steps companies take to decide when and how to mark down the non-cash asset’s value. Complaints persist about the judgment-laden exercise. Some investors complain, too. When a company announces an impairment, it often happens long after the market knows an acquisition was a bad idea.

But plenty of analysts find value in the news about impairments. A major investor group in December said most of its members favor better disclosures about acquisitions instead of revamping the accounting.

But the market may not react negatively to negative equity, particularly because a non-cash item like goodwill doesn’t affect a company’s cash flows. Of the S&P 500, 30 companies already have negative book value, for a variety of reasons, including stock buybacks. Starbucks Corp., McDonald’s Corp., and American Airlines Group Inc. are among companies in the index that have negative equity.

To Craig Moffett, analyst at MoffettNathanson LLC, who covers telecommunications companies including AT&T, a flip to negative equity because of an accounting maneuver wouldn’t raise alarm bells.

“You’d just back it out,” Moffett said. “It’s no different than if you’re looking at non-cash pension adjustments; you look right through them.”