Japan saw 60 accounting discrepancies, including inflated numbers in reports in 2020, more than double its 24 cases in 2010, according to Tokyo Shoko Research data. The Toshiba accounting scandal from 2015 remains one of the most well known.
Photographer: Kiyoshi Ota/Bloomberg

Embarrassing accounting debacles at Olympus and Toshiba haven’t been enough to shake up Japan’s cozy audit world. The government has issued penalties and has pledged to improve the corporate governance of its businesses, but audit violations have continued with only voluntary new restrictions introduced.

Critics say Japan’s regulator, the Financial Services Agency, has been too soft on its deterrence measures. The Japan Institute of Certified Public Accountants is drawing up voluntary measures to cut the cord on practices that can lead to lax oversight. From April 1, partners at audit firms will no longer be able to work with the same company for more than 10 years. Time worked on an audit prior to becoming partner will be counted. At the time of the 2015 Toshiba Corp. scandal, the multinational had retained the same auditor for more than 40 years.

Developments overseas have had some impact. After the fallout of U.K.'s Carillion Plc, where firm rotations were in place, followed by the ongoing Wirecard AG case in Germany, a senior financial agency official with direct knowledge of the situation said the agency was closely monitoring the actions of its European counterparts.

The revised corporate law in March mandates corporations to carry at least one independent outside director. “In Japan, people think that if you bring in an outside independent director, you have good corporate governance,” Takaaki Wakasugi, co-director of Tokyo-based Japan Corporate Governance Research Institute, said in a video interview. It’s more important to enforce corporate governance codes and rules, he said. 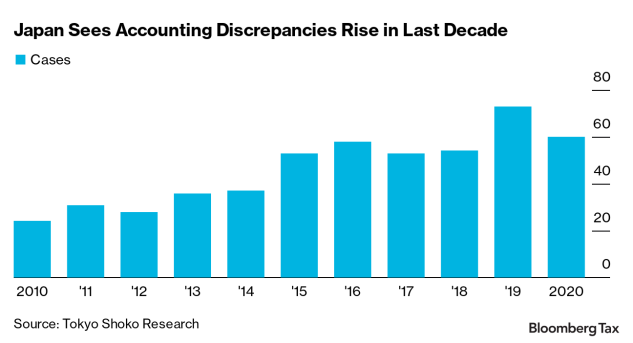 Such regulatory actions have yet to catch the attention of the entirety of Japan Inc. The financial regulator introduced a voluntary governance code with auditors publishing detailed annual quality reviews after Toshiba in 2017. But less than 20% of audit firms for listed companies had introduced them by July 2019, according to government data.

The Public Company Accounting Oversight Board introduced audit quality indicators for auditors to explain to investors and others actions by companies. The Japanese regulator has felt indicators help “boost competition among auditing firms,” the senior agency official said.

Audit fees in Japan are only a quarter of the level compared to the U.S. and also below averages in Europe, according to a 2020 association survey.

“If you don’t pay an appropriate amount, the auditor won’t do an adequate audit,” Yoshihiro Machida, an accounting professor at Aoyama Gakuin University in Tokyo, said in a video call. Machida has been serving as an adviser to financial agency committees looking at audit policies.

“The U.S. requires a large volume of information disclosure while Japan’s is much smaller,” Takaaki Ino, CEO of PricewaterhouseCoopers Aarata LLC, said in a virtual interview.

Comparing audit fees between Japan and the U.S. and Europe would not be appropriate, Taisei Kunii, CEO of Deloitte Touche Tohmatsu LLC, said in an email. “The fee depends on differing situations of each company,” he said.

Machida rejects that kind of assessment. If listed companies paid double the fees, the auditing quality would double and so would the standards, he said.