With the biggest U.S. banks facing an unprecedented economic standstill and new accounting rules, most analysts expected them to double what they set aside for bad loans a year ago.

Both and posted their highest loan-loss provisions in a decade, setting aside more than $12 billion to cover defaults across the economy, but especially from credit-card borrowers and oil companies. Banks faced criticism in the last crisis for being slow to recognize the coming pain, and Tuesday’s results show they intend to avoid that this time. 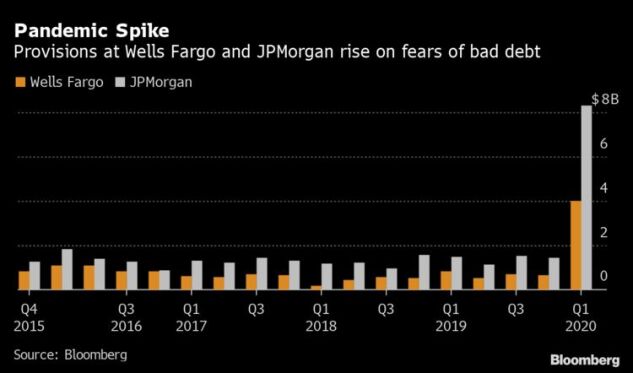 JPMorgan’s profit fell 69% to the lowest in more than six years, even as the firm’s traders seized on record volatility to deliver their best quarter ever. Wells Fargo posted earnings of 1 cent per share, down from $1.20 a year earlier.

“If we can help the country get through this, everybody’s better off. If we lose a little more money in the meantime, then so be it,” JPMorgan Chief Executive Officer said on a call with analysts. “We’re adults, we know that if the economy gets worse, we’ll bear additional loss. We know we can handle really, really adverse consequences.”

Shares of both banks slipped in New York trading at 11:58 a.m. as the broader market rose, with optimism the pandemic is slowing driving up the S&P 500 more than 2%. JPMorgan slumped 3.7% and Wells Fargo was down 4.4%.

“I’m surprised all the bank stocks are down,” said David Donovan, who leads the Americas global financial-services practice for Publicis Sapient, which helps set strategy for banks. “I’m surprised the Street didn’t foresee the fact that all of these banks are going pump up their loan-loss reserves. That’s just good business.”

JPMorgan set aside $8.29 billion for bad loans, more than double what many analysts expected. That was on top of a $4.3 billion increase in total reserves that the bank had previously announced, prompted by a new accounting standard this year known as CECL, which requires banks to set aside provisions earlier in a cycle. Wells Fargo’s $4 billion provision was also well beyond expectations.

The reports give a first glimpse of what’s likely to come as the rest of Wall Street reports results this week. , Citigroup Inc. and are set to report Wednesday, with Morgan Stanley coming a day later.

Banks are also grappling with lower interest rates that will likely mean a slump in lending revenue at the same time that slowing economic activity causes loan losses to spike.JPMorgan cut its full-year outlook for net interest income -- revenue from customers’ loan payments minus what the bank pays depositors -- by $1.5 billion to $55.5 billion, while Wells Fargo stopped providing an annual forecast for the figure.

While the provisions were eye-popping, the first quarter didn’t actually feature significant pain. JPMorgan’s net charge-offs fell from the fourth quarter, and Wells Fargo’s nonperforming assets were lower than they were a year ago.

Still, banks tried to anticipate how the global lockdown to stem the spread of the coronavirus would affect businesses and consumers. JPMorgan Chief Financial Officer said the firm would likely add more to reserves in the second quarter after boosting them by more than $11 billion in the first quarter, but the bank is still trying to gauge what government relief programs will mean for defaults.

“We haven’t actually seen the stress emerge,” she said on a call with analysts. “What we took in the first quarter was our best estimate of future losses.”

Wells Fargo CEO said the bank doesn’t see anything in its loan portfolio right now that would force it to boost reserves in coming quarters.

“But if confidence does deteriorate and the shelter-in-place orders stay on for longer, which is possible, it wouldn’t surprise me that loss estimates would have to go up,” Scharf said on a call with analysts.

Scharf said economists are still struggling to forecast the trajectory of unemployment rates and gross domestic product, saying there’s no clear path on what’s to come.

Banks also have to determine how many lending commitments will turn into funded loans as companies tap previously unused revolving credit facilities. Scharf said commercial clients had tapped $80 billion of loan commitments just in March. JPMorgan said customers had drawn more than $50 billion of existing revolvers and were approved for $25 billion in new credit in March.

U.S. banks have maintained that they are much better positioned for this crisis than in 2008. JPMorgan’s key capital ratio was 11.5%, within its medium-term target range. Wells Fargo’s was 10.7%, above its internal target.

“We like to be conservative in reserving,” Dimon said. “Plan for the worst so you can handle it.”