On Thursday, the rulemakers who came up with the current expected credit loss standard, or CECL, will host a public meeting for feedback.
Photographer: Mark Kauzlarich/Bloomberg

Banks in 2020 made a once-in-a-generation change to their financial reporting, rolling out a massive change to how they account for loan losses in the thick of a global pandemic.

One year later, there are signs that the massive undertaking worked, but the question on whether the accounting resulted in clearer insight into bank lending is harder to answer. On Thursday, the rulemakers who came up with the current expected credit loss standard, or CECL, will host a public meeting for feedback. The Financial Accounting Standards Board goal is not just to look back but consider if any changes to the standard are needed, big or small.

The board is likely to get an earful, but perhaps no clear answers. The confluence of the pandemic, sweeping government stimulus programs, and bank regulator intervention makes it hard to assess how CECL performed in the most unusual of years. 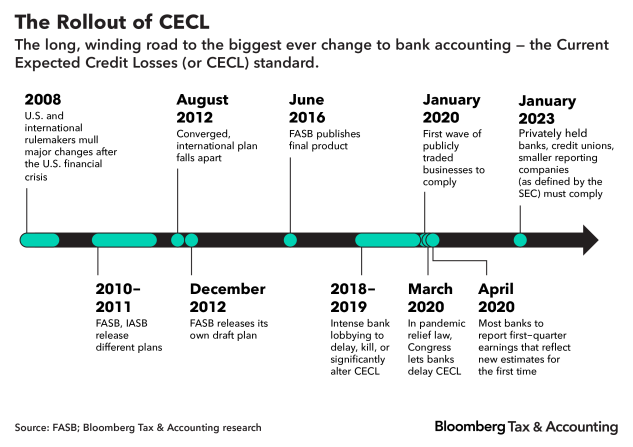 Developed in response to 2008 financial crisis when bank balance sheets looked rosy despite looming losses, CECL requires businesses to look to the future and own up to losses coming down the pike. The idea is to set aside reserves to cover future losses when they have enough cushion to do so, versus when they’re cash-strapped and stressed.

The four biggest consumer banks set aside almost $18 billion in reserves when Covid-19 shut businesses down, a move that shrank their net income and earnings per share, even though they didn’t actually feel the losses yet. Banks of all sizes did the same.

Then, as Covid-19 cases declined and vaccines rolled out, banks in late 2020 released, or freed up, some of those reserves, which padded earnings.

“It feels like it worked the way they intended,” said John Lankenau, vice president at SS&C Primatics, a company that helps banks implement CECL. “When it looks like there’s a real bad storm you go down the cellar, and then you come back up when the clouds go away.”

In that sense, CECL “worked.” But many banks held their noses while doing so, saying the standard forced them to book outsize losses, tie up money in reserves, and inject extra unpredictability into financial reporting amid global upheaval.

David Zalman, CEO of Houston-based, Prosperity Bankshares, Inc. called CECL “the most stupidest thing in the world,” at a March investor presentation.

Indeed, a major criticism of CECL—that it would introduce volatility to bank earnings—played out.

Then again, the economy itself was unpredictable. Earnings under the old, pre-CECL accounting would have been up and down, too, said Betsy Graseck, managing director at Morgan Stanley.

“This economic trajectory we had in 2020 was massively volatile,” Graseck said. “Any accounting—the incurred loss or CECL—both would have had historically high reserve builds.”

The volatility meant analysts had to do their own calculations beyond official U.S. generally accepted accounting principles to understand banks’ true economic outlook, said Saul Martinez, managing director at UBS.

“I don’t think we’ve come to terms with how investors are going to analyze core profitability under CECL,” Martinez said. “Are we going to look past GAAP earnings because they’re so volatile, depending on how reserves move in a given quarter?”

Banks — and analysts — care so much about movement in reserves because it’s central to bank business. Under CECL, the provision for loan losses gets recorded as an expense that hits net income, passes less money to shareholders, and ripples through markets.

But expected losses are not the same as actual losses. Banks suffered few losses in 2020, mostly because of an unprecedented government intervention.

The Bank Policy Institute, a Washington trade group, argues that this kind of intervention blunted the worst effects of CECL, but it still dissuaded bank lending.

In a white paper, the group said banks that adopted CECL experienced a three percentage-point drop in consumer loan growth in 2020, and that the actions of banking regulators avoided more severe hits to broader lending portfolios.

The details matter because CECL does not give banks a formula to calculate losses. They’re allowed to use reasonable estimates and forecasts based on their customers and loan portfolios. They also use macroeconomic data like unemployment projections from third parties like Moody’s Analytics. Some banks complain about the sensitivity of their loss estimates when they have to rely on what could be the whims of outside consultants.

“The guy at Moody’s has hemorrhoids, we all suffer,” Wintrust Financial Corp. CEO Edward Wehmer said at a conference in March. “He starts feeling better, we’re okay.”

Privately held banks, credit unions, and a class of small publicly traded banks have until 2023 to implement CECL. Debates about the usefulness of the accounting will likely continue in the meantime, but the fiercest opposition—from banks, lobbyists, and lawmakers—to the accounting appears to have abated.

David Turner, CFO of Regions Financial Corp., said he was “not a fan” of the standard, but banks have to live with it.

“I think it’s horribly volatile for industry and that’s not helpful to investors to try to figure out what earnings are through that,” Turner said at a March banking conference. “But it is what it is. We have to deal with it.”