The coronavirus pandemic plus a major accounting change made Verizon Communications Inc., AT&T Inc., T-Mobile Inc., Comcast Corp., and Charter Communications Inc. this quarter boost their bad debt expenses, the line in their income statements that tallies money they won’t collect. Comcast hiked its provision to cover the expense the most, increasing it by by 46% compared to last quarter, with Verizon following closely at 43%.

The unfolding recession and worries that customers will fall behind on their cell phone and cable TV bills would have roiled bad debt expense in normal times. But new accounting ups the ante.

Under the current expected credit losses (CECL) standard that went into effect Jan. 1, businesses can no longer wait until customers miss payments to book losses. The standard requires companies to look to the future, assess current conditions, and consider the past to estimate losses on loans and receivables—payments due from customers. It’s that “future” part that makes the numbers jump; when the future looks bleak, those anticipated losses pile up. AT&T boosted its provision 33% compared to Dec. 31, T-Mobile’s increased by 17%, and Charter by 16%.

“It feels like an accounting rule that was written for normal times. And these are not normal times,” said Craig Moffett, analyst and founder at MoffettNathanson Research LLC. 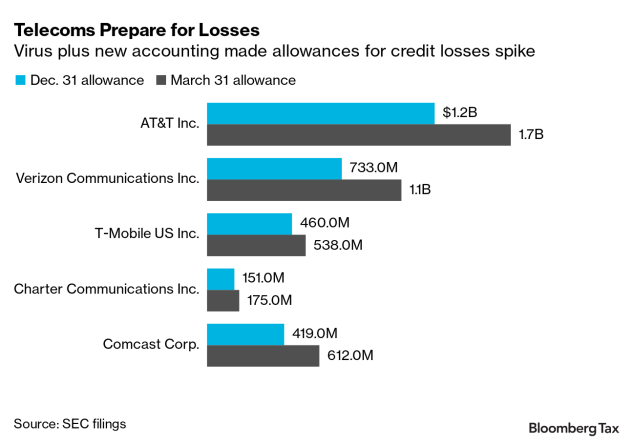 The Financial Accounting Standards Board’s CECL standard is considered one of the most important accounting changes to emerge from the 2008 financial crisis. It is a game changer for banks, where loans and extending credit to customers is a central part of their business. The standard applies to all businesses, however, albeit on a smaller scale.

For the telecoms, the new accounting must be used to assess their receivables, the payments they expect from customers. The companies must record their accounts receivables as assets minus provisions for expected credit losses. Some companies call it “bad debt” and others “doubtful accounts.” Receivables include the money they collect from monthly wireless bills and installment payments for the latest i-Phones. For AT&T, its CFO said it also had to consider movie theater owners paying its WarnerMedia division for films at a time when most U.S. theaters have been shuttered since mid-March.

“We went in and said, ‘In this environment, what is our estimate of collections?’” AT&T CFO John Stephens said on the company’s earnings call April 22.

The effect of AT&T increasing its expected credit losses this quarter by $395 million to a total of $1.65 billion is tiny in the context of the company’s $52 billion of assets. Bad debt isn’t going to move the needle on how analysts and investors view a company.

But changes in the number matter, nonetheless. Increases in the bad debt expense can lend insight into what a management team is considering behind the scenes.

“If this number creeps up at an accelerated rate that’s a warning sign,” said David Barden, senior telecom analyst at Bank of America Securities.

In addition, the total companies report in accounts receivable is part of several metrics investors use to understand companies’ financial performance. Day Sales Outstanding, for example, is the measure of the average number of days it takes a company to collect payments after a sale. This measure is calculated using accounts receivable. Any change to accounts receivable affects that metric, said Todd Castagno, accounting and tax policy analyst in Morgan Stanley’s research division.

“Even though it’s a small number relative to the income and the balance sheets of these companies, it can give you a sense of what does management think the strength of its customers is,” Castagno said.

If the economic chaos continues, expect companies to increase their credit loss allowances even more.

“We are watching bad debt very closely, given the current economic backdrop, which may put pressure on bad debt in the next few quarters,” said T-Mobile CFO J. Braxton Carter on the company’s May 6 earnings call. “But we feel we are well prepared to manage through these economic conditions.”

Telecom companies deal with a wide swaths of customers. A minimum-wage worker bogged down with student loans or credit card debt may not apply for a bank mortgage, but he or she will sign up for internet service to take online classes or watch streaming TV shows. Same goes for the customer with pristine credit and lots of disposable income.

“Quasi-utilities like cable and phone companies have customers of every demographic stripe, including lower income customers,” Moffett said. “So the challenge of forecasting bad debt rates is in some ways worse for cable and telephone companies than it is for banks.”

Complicating matters is the voluntary pledges the companies made to not cut off struggling customers.

Verizon in its latest quarterly filing said it waived late fees and has seen an increase in delinquencies across its retail customer base. It raised its allowance for credit losses in part based on the number of customers it expected to take advantage of payment relief.

“If the current levels of delinquencies for our consumer and small and medium business customers continue or grow, additional provisions to our allowance for credit losses may be required, which could be significant,” the company said in its April 27 filing.

Big increases may not mean much compared to the rest of a company’s financial picture. But it’s something analysts will keep an eye on and ask questions about, Moffett said.

“When you have customer relationships with 100 million families and unemployment is flirting with 20%, how do you not ask about bad debt?” Moffett said.