Chipotle Mexican Grill Inc. was one of many restaurant chains and retailers whose liabilities increases because of the effects of a new lease accounting standard.
Photographer: Luke Sharrett/Bloomberg via Getty Images

U.S. retailers and restaurants reported balance sheets that ballooned by the billions in the first quarter with the addition of a fundamental operating expense: leases on their stores and eateries.

Chipotle Mexican Grill Inc. tripled its liabilities, McDonald’s Corp. increased its liabilities by a third, and Nordstrom Inc. reported a nearly 25% increase in its total liabilities—all thanks to new lease accounting rules.

The historic balance sheet shift has rippled across industries as companies began reporting their financials under the new accounting standard this spring. But none saw as dramatic a hit as retailers and restaurants—capital intensive companies that now have balance sheets that more truly reflect how they operate.

Larger balance sheets were expected. But for some companies, that more accurate picture of their operating costs resulted in a drag on earnings and profit margins.

The change in accounting is projected to bring as much as $4 trillion worth of plane, office space, and equipment leases onto balance sheets globally.

On average, operating lease liabilities made up nearly 50% of the total liability for companies in the consumer discretionary sector, like retailers. For all other sectors, the operating leases made up just 10%, said Zach Gast, global director of research & analytics for CFRA Research.

The impact on the income statement caught some investors by surprise, said Todd Castagno, accounting and tax policy analyst for Morgan Stanley Research. 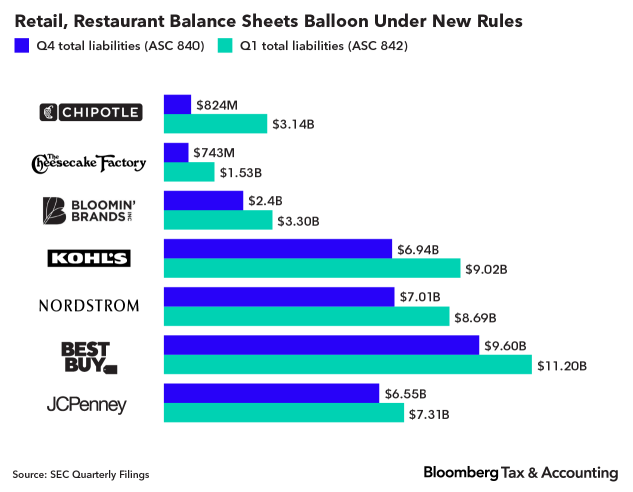 In the restaurant sector, the new accounting has disrupted store-level profit margins, in most cases dragging them down, because of the higher occupancy costs, said Nicole Miller Regan, managing director for equity research at Piper Jaffray & Co.

Store-level margins reflect the health of the underlying economics of the business pulled out from the overall corporate conglomerate. Management compensation and stock buy-backs can tilt corporate performance, but those financial decisions don’t reflect how many people are shopping or eating at its stores or restaurants, Miller Regan said.

Investors have to be careful because it could appear as if store performance wasn’t as strong as they were a year ago. The company isn’t worth any more, or less. “It’s simply an accounting change,” she said.

McDonald’s reported a lower franchise margin as a result of the change in lease accounting. Although roughly 95% of McDonald’s locations are franchises, the home of the Big Mac increased its liabilities by a third, reflecting $12. 5 billions in leases.

The company describes itself as the lessee of a “significant real estate portfolio” including leases of land and buildings. Still, the the company described the lease accounting change as having a “minimal impact” to its income statement and did not affect cash flows.

Bloomin’ Brands Inc. total liabilities also grew by a third with the addition of $1.5 billion in operating leases. But the true impact to the owner of Bonefish Grill and Outback Steakhouse came to the income statement.

The company had more than 15 years of deferred gains from sale-leaseback arrangements parked on its balance sheet, funds that eventually would roll through the income statement to offset future rental expenses. Under the new rules, ASC 842, the accounting for those arrangements was eliminated, Gast said.

The result was a one-time, $190-million adjustment to Bloomin’ Brands’ accumulated deficit and an extra $3.1 million in operating expenses. That equals a 3-cent reduction in earnings per share, the company reported.

Companies with sale-leaseback arrangements saw some of the biggest hits to net income, Gast said.

“If you think of retail, which generally growth is hard to come by, if you do have these streams of income, going from 4% growth to 3% growth can be a big deal,” Castagno said.

Nordstrom’s $1.9 billion in lease liabilities lowered the retailer’s return on assets and adjusted return on invested capital. That second metric reflected a mix of old accounting and the new rules.

Nordstrom Chief Financial Officer Anne Bramman said in an earnings call that the new lease accounting resulted in no material impact to the company’s financials, including the balance sheet and the income statement. However, the company’s balance sheet grew nearly a quarter with the addition of operating leases.

Investors typically consider return on invested capital an important benchmark, and companies are changing their methods to calculate such non-GAAP metrics to include the new lease liability. Management compensation is often tied to such ratios, making it an important area for investors to scrutinize, Castagno said.

“Ignoring the accounting could potentially produce advantageous reporting optics,” he said. “My sense is companies will have to modify their metrics accordingly.”

Investors are adopting the lease liability companies report because they consider it more reliable than the estimates that analysts used previously based on future rent payments, Castagno said.

“I think it’s better for markets if investors have more transparency and they can make better decisions and better forecasts. In theory the stocks should be priced more efficiently,” he said. “Most investors see it as a net positive.”