Gary Gensler, chair of the U.S. Securities and Exchange Commission, has his agency targeting multiple concerns with the use of special purpose acquisition companies, or SPACs.
Photographer: Evelyn Hockstein-Pool/Getty Images

Wall Street’s top regulator promises to issue new, tougher rules for SPACs, but the agency already has ramped up its scrutiny of the blank-check companies that became market sensations in 2020.

The Securities and Exchange Commission is questioning growth projections, asking for details about risks, and seeking more information about the internal controls of individual special purpose acquisition companies, according to comment letters it has sent to companies.

The queries, which the agency makes public after completing its reviews, are part of the SEC’s normal process of combing through companies’ registration statements to ensure critical disclosures don’t mislead investors. While the letter process is routine, the agency’s questions to SPACs are revealing, identifying top concerns about the companies and the risks their transactions could pose to investors.

“What you’re seeing with the comments is another avenue where the SEC is conveying its concerns or reflecting its scrutiny on this particular area,” said Luke Cadigan, partner at Cooley LLP and former SEC Enforcement Division attorney.

The underlying theme in the letters from agency staffers to SPACs: Tell us, and would-be investors, more. 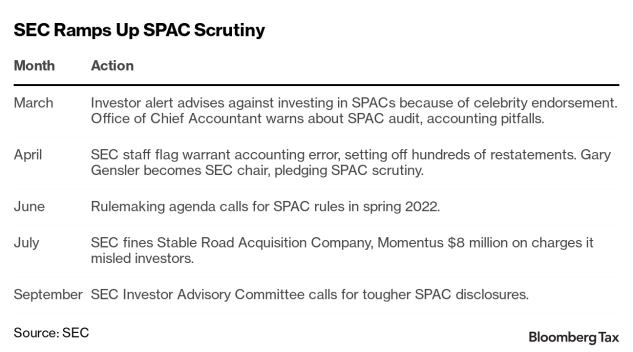 SPACs are shell companies—with no employees or operations—that raise money, go public, and find a promising private company to acquire. The process gives target companies a shortcut to public listings.

Companies submit registration statements to the SEC before certain transactions, such as SPAC mergers. The commission staff selectively reviews these statements and sends letters asking questions before allowing a transaction to proceed.

In comment letters, the SEC staff peppered SPAC managers with questions about conflicts of interest, how they valued target companies, and how they narrowed down promising private company targets to acquire. In some cases, the agency told them to dial back rosy projections or at least manage expectations, the letters show.

In other cases, the regulator drilled down on one of the biggest criticisms of SPACs—that the pressure to find a target company to take public in a compressed time frame can mean a target not ready for prime time.

The SEC asked numerous companies to make across-the-board disclosures spelling out that the sponsor, certain members of the board, and officers would benefit from completion of a merger and “may be incentivized to complete an acquisition of a less favorable target company or on terms less favorable to shareholders rather than liquidate.” The SEC sought such disclosures in July from CM Life Sciences II Inc., New Beginnings Acquisition Corp., and Amplitude Healthcare Acquisition Corp., among others.

The pressure to close on a target is a key risk that investors and academics have highlighted about SPACs.

“The sponsors have incentive to close a deal—any deal—because they lose all their money unless there’s an acquisition,” said Usha Rodrigues, chair of corporate finance and securities law at the University of Georgia School of Law.

As the SPAC market boomed in 2020 and early 2021, the SEC started raising red flags. In the spring of 2021, the regulator warned investors not to put money in SPACs just because of a celebrity endorsement, and in a separate alert it flagged that the rush to go public could lead to accounting and auditing pitfalls for young private companies.

In April, agency accountants stepped in. An SEC staff announcement said SPACs needed to account for warrants—important money-raising tools ubiquitious in SPAC deals—as liabilities, not equity. The announcement halted initial public offerings and led to hundreds of SPACs and the companies they had taken public to redo, or restate, their past financial results.

When Gary Gensler took the helm of the agency in April of this year, he promised further scrutiny of SPACs.

“There are a lot of fees and potential conflicts inherent within SPAC structures, and investors should be given clear information so that they can better understand the costs and risks,” Gensler said in prepared remarks to the House Financial services Committee on Oct. 5.

In July, the SEC’s Enforcement Division sued Stable Road Acquisition Corp. and space transportation company Momentus Inc. on allegations that they lied about the space company’s technology, including a false claim that its propulsion system had been “successfully tested” in space. The SEC fined the companies and its executives more than $8 million, less than a month before the SPAC took the space travel company public.

“It was an indication that they are going to be aggressive in that space,” Cooley’s Cadigan said of the enforcement announcement.

The SEC’s Investor Advisory Committee also recommended that the SEC beef up disclosures about the key risks involved in investing in SPACs.

Some of the questions the SEC asked in the most recent round of publicly available letters reflect the concerns raised by groups like the advisory panel. In some cases, the SEC asked companies to highlight the money-making structure of a SPAC to clearly disclose that early investors can make money as soon the SPAC completes a merger, whether or not the operating company is successful. The agency asked several companies to clarify if sponsors and affiliates can earn positive returns “even if other SPAC shareholders experience a negative rate of return” after the merger.

SPACs are watching the agency’s moves. Some are considering including extra details in their filings, in line with what the advisory committee recommended, even though they don’t have to, said Mark Wood, co-head of Katten Muchin Rosenman LLP’s national capital markets practice.

“We’re always thinking about are there ways we could improve our disclosure to make sure we’re providing best information, and also to head off SEC comments,” he said.