The Securities and Exchange Commission has pressed more than two dozen companies to spell out how they plan to make their companies greener or stave off the effects of extreme weather, letters analyzed by Bloomberg Tax showed.
Photographer: Al Drago/Bloomberg

Market regulators have offered scant details about an ambitious plan to require companies to disclose details about their greenhouse gas emissions and how climate change impacts their operations.

But correspondence between a select group of major companies and the U.S. Securities and Exchange Commission offers some clues on agency priorities in one part of the proposal, which is scheduled to be unveiled next week. The SEC behind the scenes has pressed more than two dozen companies to spell out how they plan to make their companies greener or stave off the effects of extreme weather, the letters show. And in every case, the agency dug deep.

When companies—ranging from Hershey Co. to Honda Motor Co. Ltd.—told the regulator that climate risk wasn’t a financially material issue yet, the SEC reviewers pushed for justifications.

The detailed answers the companies gave supply the agency with much-needed data to help the regulator draft its rules, said George Wilson, director of the SEC Institute at the Practising Law Institute.

“These comment letters are informing the rule proposals,” Wilson said.

Even the fact that almost all companies—25 out of 26—said climate risk wasn’t a material issue yet provides useful information to the SEC, said Kristen Sullivan, ESG services leader at Deloitte LLP.

“That’s where the SEC has been leaning—saying, ‘In our investor protection mandate, we know that there’s just an absence of consistent, comparable, timely climate-related risk disclosure and information that allows investors to truly understand a risk profile,” Sullivan said. 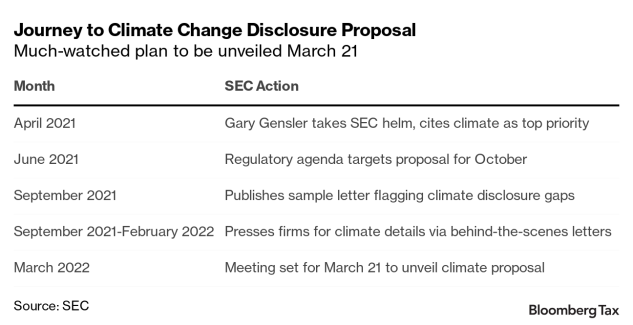 The agency targeted companies in a variety of sectors, from retail to manufacturing to technology, asking questions it previewed in a sample letter released in September.

All of the companies the regulator questioned said climate change was an important issue, but only one said efforts to mitigate it had become a significant financial issue, the letters show. They said they already share information about material risks they face and didn’t have anything to add.

The sole company emphasizing risks, Houston-based energy firm Phillips 66,said it expects to incur substantial costs to comply with existing and future environmental laws and it would also have to brace for decreased demand for its products. But the company already spells out these risks in its 10-Ks, the firm told the SEC.

Phillips 66 agreed, however, to include a new risk factor in future filings to warn that continuing political and social concerns about the issues of climate change could result in litigation-related expenses, the company said. Defense company General Dynamics Corp. also told the regulator that it would include in future filings a new disclosure about the risk of how future climate change laws and regulations could affect the business, including increased compliance costs.

Every other company, from Facebook developer Meta Platforms Inc. to Monster Beverage Corp., said they were paying close attention to climate change and taking steps to combat risk, but the steps so far didn’t hit their bottom lines too hard. They would update their financial statements in the future when the costs become more significant, they said.

“As and when such costs and expenditures, and other related matters as applicable, become material to it, Honda intends to ensure that its disclosures appropriately cover and discuss these matters,” Honda wrote in a letter that echoed responses from several other large companies.

In each case, SEC reviewers accepted the companies’ conclusions, once they backed up their claims that climate change wasn’t a material risk yet.

Drop in The Bucket

Target Corp. said it has spent about $100 million per year in the past three years to install LED lighting, efficient refrigeration units, and rooftop solar panels but that represents less than 3% of total annual capital expenditures. The retailer said it didn’t expect such green expenses to run more than 5% of total annual capital expenditures anytime in the near future.

Promises to get to net-zero carbon emissions got scrutinized, too. Cisco said it expected to spend $20 million per year to reach its goals, but that figure pales compared to the company’s costs and expenses of $37 billion in fiscal year 2021, the company said.

The SEC also pressed for details on climate-related litigation risks. Discover Financial Services said, in theory, it could be exposed to lawsuits if, for example, climate change resulted in higher household energy costs, which could reduce consumer disposable income, and impact their ability to pay their credit card bills. Accounts in collection have a higher risk of litigation related to credit reporting or collection practices.

“However, this is highly conjectural, abstract and generalized,” the company wrote. The SEC did not press further.

The SEC asked many companies for insight on extreme weather affecting their operations. Meta Platforms Inc. shared the example of the polar weather vortex pattern in 2021 causing the company to incur energy costs equivalent to just over 1% of the company’s net income for the quarter. Although the number was not material, the company still determined it would be “prudent” to update its risk factors to disclose that it had been, and may in the future, be subject to increased energy costs because of adverse weather events.