The Securities and Exchange Commission is looking into how to stem conflict-of-interest violations in large private equity investors funds.
Photographer: Joshua Roberts/Bloomberg

As investments poured into private equity funds over the past two decades, an unexpected compliance problem mushroomed along with the size of the portfolios.

Companies worldwide began tripping over strict U.S. auditor-independence rules that limit the types of services auditors can provide to their clients. For private equity investment funds, which can combine dozens, even hundreds, of companies in a single fund, and treat them all as affiliates, the conflict-of-interest rules can be triggered with a single consulting contract.

Now, the Securities and Exchange Commission hopes to ease the confusion by changing its rules.

“As more and more transactions have occurred and as more and more funds are set up and portfolio companies are there, the burdens are real,” said Jason Mulvihill, chief operating officer and general counsel of the American Investment Council, which advocates on behalf of private equity firms.

The SEC’s proposed remedy would set a higher bar for relationships that would result in an independence violation. It wants to carve out companies and consulting work that aren’t material to the investment fund as a whole or to an individual portfolio company that’s the subject of the audit.

The SEC has said it wants to focus primarily on the kind of business deals that could sway an auditor’s judgment and potentially weaken financial reporting.

“These aren’t just theoretical problems,” said Andrew Fuchs, litigation and accounting counsel with Skadden, Arps, Slate, Meagher & Flom, LLP. “They occur, and the SEC actually enforces the rules, even in some cases where it seems very technical.” 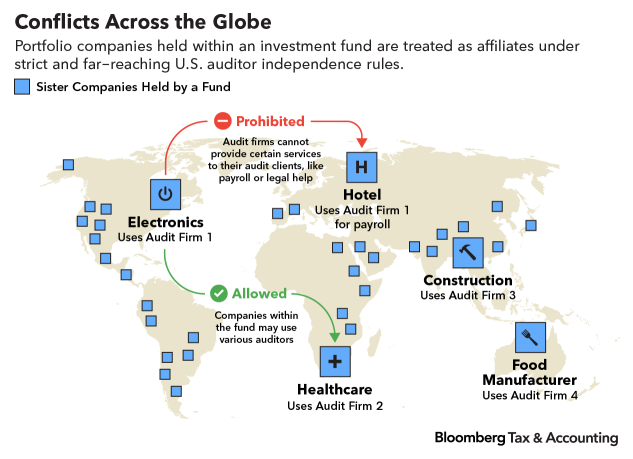 Investment funds can hold controlling stakes in dozens of distinct companies. But the rigid rules treat those disparate holdings—such as a hotel chain, a dollar store, and a medical-staffing company—as a single audit client even though they have separate management teams, operate in different countries, and can be sold or folded into a different fund at any time. Interpreted strictly, the conflict-of-interest rules mean that an accounting firm can’t both audit one of those companies and provide payroll or legal services to the others.

The rules were not designed with the $2.1 trillion private-equity industry in mind. Since the SEC adopted its auditor-independence rules in 2003, assets managed by private equity firms have grown by roughly five times. Meanwhile, the four largest accounting firms have expanded their service offerings globally.

The SEC says it handled multiple requests for guidance related to portfolio companies in 2019. Over the past decade, SEC staff has found that such violations don’t impair an auditor’s objectivity, so the auditor can stay on the job.

The proposed rule change would take that guidance—quietly doled out through phone calls and through individual cases—and formalize it in SEC regulations. 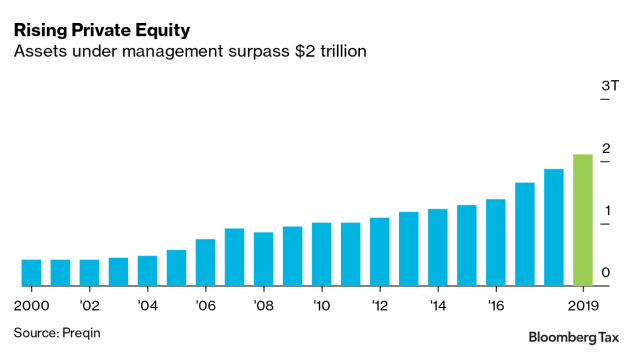 The proposal has sparked concerns that the changes would erode important safeguards enacted after the collapse of Enron Corp. and WorldCom Inc.

The industry’s arguments fall flat to former SEC chief accountant Lynn Turner. To him, ensuring auditors are independent is more important than guaranteeing that companies can select the auditor of their choosing or the consultants they hire.

“You either are independent or you’re not,” Turner said. “You can’t be partially independent and create confidence with investors.“

Mulvihill said he supports the SEC’s efforts, but he argues that the rule change wouldn’t eliminate the burden of evaluating each company in a portfolio and its possible ties to the audit firm.

Portfolio companies should not be treated as affiliates for the purposes of auditor independence just because they are held in the same investment fund, he said.

“The reality of it is that those portfolio-company businesses are truly separate for the purposes of auditor independence,” Mulvihill said. “And you shouldn’t have to go through a burdensome review of every single one of those portfolio companies to figure out whether Deloitte can audit one of them and provide non-audit services to another one of them.”

At the heart of the debate are strict prohibitions that bar U.S. audit firms from providing accounting, payroll, legal and other services to their audit clients. The problem for investment funds and the companies they own is that the definition of “audit client” extends to any company held by the fund.

The prohibitions were a key ingredient of the 2002 Sarbanes-Oxley Act, passed to restore trust in financial reporting after a string of accounting scandals.

Since that landmark legislation took effect, U.S. accounting firms have built extensive systems designed to identify relationships and situations that could threaten auditor independence. The goal of those systems is to prevent a violation, said Vanessa Teitelbaum, technical director of professional practice at the Center for Audit Quality.

But lapses still occur, Teitelbaum noted, and in those cases, the lead auditor must report those violations to the audit committee of the client, who then decides whether the auditor can stay on and how to address the problem. The prohibited consulting service would be discontinued, she said.

In other cases, the auditor might have to be replaced. Or if a company plans to go public, it might have to wait three years before it would be able to register with the SEC.

Complying with the independence rules can be both time-consuming and costly, with sometimes serious ramifications for those found to have fallen short.

As an audit partner working with private equity firms, Sal (Kislay) Shah spent a significant amount of his time monitoring relationships between his clients’ investment holdings and the consulting contracts of his own employer.

Sometimes, he said, he wouldn’t find out about a business relationship—like a bookkeeping contract to an affiliated client in a distant country—until it was too late. Keeping track of the myriad business relationships scattered across the globe was stressful, and the costs mounted because of the time and resources spent on an ever-shifting target, said Shah, who today is a partner with BKD LLP.

An accounting firm with the best of intentions and effort can still trip into an independence violation, he said.

In 2019, RSM US LLP agreed to pay $950,000 to settle SEC charges that it violated the independence rules. The firm didn’t always know what services it or its affiliates around the globe were providing to its U.S. audit clients, in part because a database it used to track clients was incomplete and not used consistently by staff, according to the SEC settlement.

Daniel Taylor, a critic of the SEC’s efforts to ease audit and independence requirements for new and small public companies, said the one-size-fits-all approach to the rules triggered false positives, making it difficult to enforce the rules.

Taylor, who teaches at the Wharton School at the University of Pennsylvania, said he hoped that resetting that tripwire would give the SEC the flexibility to decide what is material, and ultimately allow for more aggressive enforcement.