A warning from the Securities and Exchange Commission is causing a chilling effect on special purpose acquisition companies.
Photographer: Jeenah Moon/Bloomberg via Getty Images

An SEC warning about SPAC accounting errors has not only chilled the red-hot market but triggered the first of what could be a flood of financial restatements by the popular blank-check companies.

Northern Genesis Acquisition Corp., a special purpose acquisition company that plans to take a Canadian electric bus maker public, announced Tuesday that it would have to redo its last annual financial statement to comply with a major accounting shift forced by Wall Street’s top regulator.

The Kansas City-based SPAC could be the first of many blank-check companies forced to go through the onerous process of restating past earnings because of the Securities and Exchange Commission’s announcement about SPACs improperly accounting for key money-raising tools. The company didn’t respond to a request for comment.

The SEC rocked the SPAC market when it announced April 12 that SPACs needed to account for certain warrants as liabilities, not equity. The announcement halted initial public offerings and forced SPACs, the companies they have taken public, and armies of accountants and lawyers to sift through deal terms to determine if their accounting errors were significant enough to require the companies to issue restatements.

“It’s created a huge mess,” said Kristi Marvin, founder of SPACInsider, a research firm that tracks the deals. “It’s just a lot of paperwork everyone’s going to have to get through.”

The SEC called out accounting for warrants—incentives that allow investors to buy shares at a set price in the future and are a near universal feature of blank-check company deals. Depending on complex accounting rules that can trip up even the most seasoned accountants, warrants may be classified as either liabilities or equity on company balance sheets.

Prior to the April 12 announcement, most SPACs classified the warrants as equity. Under accounting rules outlined in ASC 815, liabilities must be recorded at fair value, a measurement technique that can make companies record swings in their earnings. The underlying economics and the company’s cash flows don’t change, but it’s a lot of work to tweak the accounting and determine knock-on effects. Hundreds of companies are affected, Marvin said.

“It’s had a significant effect on the market, and that’s because no one really knows what to do,” she said. 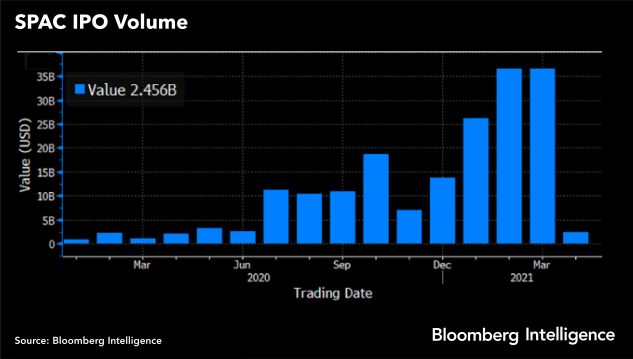 The SEC’s guidance landed like a thud. Law firm Davis Polk & Wardwell LLP in a note to clients last week said no other SEC proclamation had such a “significant chilling effect” on capital markets activities.

That may have been the point. SPACs surged in popularity in 2020 in part because the way they take a company public avoids the paperwork and regulator scrutiny of a traditional IPO. The founders of the bare-bones shell companies raise money, go public, and then target a promising business to acquire, usually within two years. That business gets a shortcut to a public listing by merging with the SPAC.

“The SEC was signaling, ‘You guys need to slow down for a while,’” said Julie Copeland, partner at StoneTurn Group LLP, a global advisory firm.

And slow down they did. While some merger deals already in the works continued, SPACs themselves paused their initial public offerings as they sorted through the accounting guidance, SPACInsider data shows.

Some blank-check companies, like Provident Acquisition Corp. and Clarim Acquisition Corp., said in securities filings they were assessing how significant their accounting errors were, signaling a possibility of restatements.

Other companies that went through SPAC mergers like fast-food chain Burger Fi International Inc. and drugmaker 180 Life Sciences Corp. told regulators they would have to delay filing required financial statements as they digested the SEC’s guidance.

But it’s too early to tell if every accounting adjustment will require SPACs and the companies they have taken public to restate past financial statements, said Michael Poveda, partner at accounting firm UHY LLP.

The assessment hinges on whether the accounting shift will result in a material change to a company’s financial information. That will vary for every SPAC and also for the companies that went public via SPAC merger, Poveda said.

“It’s not a one-size-fits-all analysis,” Poveda said. “That analysis is going to be one that requires a lot of consultation.”

Some companies that went public via SPAC merger also were able to change their accounting under the wire to avoid an onerous restatement. Laser sensor startup Luminar Technologies Inc. said in its latest securities filing that it classified those warrants as liabilities, after saying April 1 that it needed more time to submit its annual 10K filing because it was wrestling with accounting for warrants.

The same went for battery technology company Romeo Power Inc. The company in late March said it needed an extension to file its 10K because of warrants woes but by April 15, its 10K had classified warrants in accordance with the SEC’s wishes.

Accountants, lawyers, and valuation specialists meanwhile are working behind the scenes to plot next moves, Poveda said.

“We’re spending a lot of time burning the midnight oil, staying on top of it and working with not only our clients, but everyone in the ecosystem to help make sure we get to the right place,” Poveda said.