For years, the Big Four accounting firms dominated the audits of companies making their break into the public markets. Along came SPACs.

The buzzy blank-check companies that go public and then seek a target to acquire made up more than half of all initial public offerings in 2020. A regional audit firm and a small national firm performed the majority of their audits by far. That surge of new special purpose acquisition companies, or SPACs, was enough to nudge the Big Four firms out of the top IPO auditor spots for the first time ever.

“What we’re most proud of is being the underdog in all this,” said Jay Shepulski, partner and SPAC team leader at Withum, a $280 million audit firm that devotes 70 employees to SPACs. 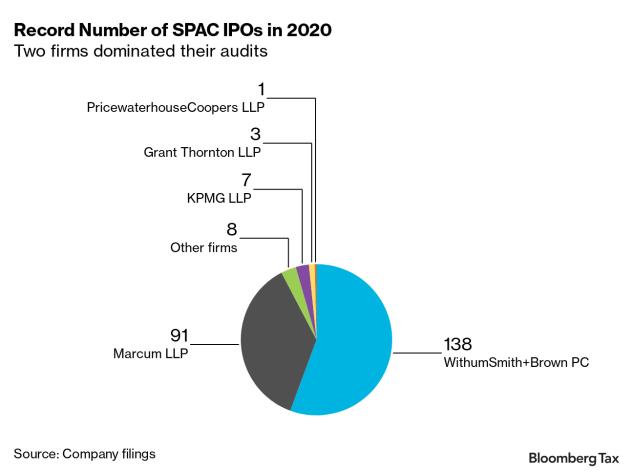 SPACs are all the rage because the way they take a company public avoids the paperwork—and regulatory scrutiny—of a traditional IPO. Backed by the deep pockets of venture capital and sometimes celebrities and pro athletes, the bare-bones shell companies raise funds from investors, go public, and then target a promising business to acquire, usually within two years. That business, in turn, gets a short-cut to public listing by merging with the SPAC.

Blank-check companies are just that: blank. They don’t have factories, equipment, or revenues. So auditing a SPAC is less time consuming and much cheaper than combing through the finances of a company that has warehouses full of inventory, offices in multiple states, or hard-to-value intangible assets like brand names and patents.

“People say, ‘All you do is audit a shell, how complicated is that?’,” said Marcum vice chairman David Bukzin. “But there are certain accounting nuances to the process and there has to be a speed associated with it, in getting it right the first time.”

Work begets work. Auditors like Withum and Marcum that have built special SPAC audit practices get to know all the players in the field, from the investment bankers to the lawyers, to the owners of the SPACs themselves. Lawyers and bankers refer clients to the firms to get the audits done.

“We built this machine,” Bukzin said. “It’s almost a seamless conveyor belt, if you will.”

It’s big business for many partners, from the lawyers to the banks, said Benjamin Kwasnick, founder of SPAC Research, which tracks such deals.

“These service providers view SPAC products as an in to long-term service,” Kwasnick said.

The cheaper price to audit a SPAC IPO compared to a company that’s already up and running likely is a key factor as to why the Big Four firms avoid specializing in auditing the shell company IPOs, said Derryck Coleman, director of research analytics at Audit Analytics. Audit Analytics research shows that SPAC IPOs usually pay audit fees between 0.02% to 0.05% of total proceeds offered, compared to a company doing a traditional IPO paying between 0.6% and 0.9% of total proceeds.

The larger firms tend to get involved in consulting for SPACs or helping the acquired company get ready to merge with the blank-check company. Under post-Enron laws, an accounting firm can’t take on a consulting client that is also an audit client.

“That’s a much better place for them to be because there’s more money to be made,” Coleman said.

The larger firms also may find openings for audit work when the target company merges with the SPAC. One firm may audit the IPO for the blank-check company, but once it finds a target, the operating company may seek out a new auditor. In many cases, the target company already has its own auditor and wants to stick with it.

“It’s a priority, but it’s not as available as people think,” Withum’s Shepulski said of keeping on audit clients. “A lot of times, they already have an auditor. And we’re very selective.”

PWC and KPMG declined to comment. Ernst & Young LLP and Deloitte & Touche LLP did not respond to requests for comment.

As the money flows into SPACs and they become more of a household name, there’s a chance the Big Four may look for more opportunities to get into the market. But the larger firms also are wary about fast-tracking accepting new clients, said Jeffrey Johanns, accounting professor at the McCombs School of Business at the University of Texas.

“You’re just stepping into the unknown and the Big Four is reluctant to do that,” Johanns said.

SPACs have been around for years; some Withum auditors have worked with SPACs for 15 years, Shepulski said. But the blank-check companies fell out of favor after the 2008 financial crisis, when the appetite for many business ventures faltered. They picked up in popularity in 2015 and exploded in 2020. Between 2019 and 2020, the number of SPAC IPOs tripled. This year is on track to be another hot year. Between New Year’s Day and Feb. 5, there were 117 SPAC IPOs,, according to SPAC Research.

Now, the question is what happens to the post-merger performance of the target companies. If these companies fall flat, there could be less enthusiasm for SPACs. In September, short seller Hindenburg Research published a widely publicized report claiming electric carmaker Nikola was an “intricate fraud"; the company denied the claims. The same short seller on Feb. 4 charged Clover Health Investments Corp., a health insurer that went public via SPAC in October, misled investors.

As more SPACs go public, the pressure also mounts to find private companies to acquire. Some just may not be ready to go public in such a short time.

“We definitely don’t put all our eggs in one basket on it,” Withum’s Shepulski said of the firm’s focus on SPACs. While it is well know for SPAC IPO audits, that accounts for only 10% of the firm’s total business, he said.

“The volume does scare me; is it sustainable?” he said.

(Updates paragraph 20 to add detail on experience of some Withum auditors. An earlier update corrected headquarters of Marcum LLP and spelling of David Bukzin's name.)