The SPAC IPO market is gradually resurfacing after it was sidelined because of accounting concerns highlighted by the Securities and Exchange Commission.
Photographer: Andrew Harrer/Bloomberg via Getty Images

The blank-check companies that captivated Wall Street for a year are playing it safe with their accounting as the market slowly recovers from a financial reporting crackdown that halted initial public offerings.

The majority of the almost three dozen special purpose acquisition companies that went public since the Securities and Exchange Commission’s market-jolting accounting announcement in mid-April are sticking to what they know: the same investor terms and incentives they used prior to the SEC’s warning. This means less favorable accounting that produces swings in earnings.

The upshot: SPACs may not want warrants with terms that make them report the money-raising incentives as liabilities on their balance sheets, but no one wants to be an outlier, said Angela Veal, managing director at Eisner Amper LLP.

“They’re waiting for one another to take the first stab,” Veal said.

The market is still shell-shocked from the SEC’s April 12 warning that SPACs were incorrectly accounting for key investor incentives ubiquitous in the blank-check deals. SPACs had counted these warrants as equity but they needed to be liabilities, the SEC said. While the IPO market had been cooling prior to the regulator’s announcement, the accounting problems brought the SPAC frenzy to a halt as auditors and attorneys scrambled to fix errors.

New SPAC IPOs are slowly coming back, but at a handful per week versus eight to 10 per day at the height of the boom.

And still, the scrutiny continues. SEC Chairman Gary Gensler has signaled that he’s closely watching the blank-check market, which offers private companies a shortcut to a traditional initial public offering and listing on public exchanges. These companies exploded in 2020 and then hit new records in the first quarter of 2021. So many SPACs are seeking private companies to acquire that the SEC issued an investor bulletin in May that high-quality target companies could grow scarce.

“They’re waiting to see if there’s going to be anything further form the SEC on this, rather than change something up and have that hit them,” said Jeff Murphy, director at Stout, a global advisory firm. “They’re saying, ‘Let’s go with maximizing the minimum amount of risk we have to take with that.’”

The less risky path appears to be sticking with warrants that clearly merit liability treatment, as outlined in the SEC’s announcement.

Twenty four of the 34 SPACs that raised money through public offerings included warrants — incentives that let investors buy shares at a fixed price in the future—with terms that require them to be accounted for as liabilities on their balance sheets. Nine offered no warrants at all and one blank-check company structured its warrants so they would be classified as equity, securities filings show. 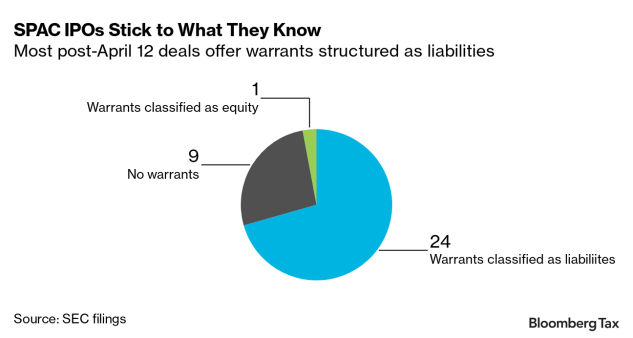 There is appetite for auditors and attorneys to come up with warrant terms that can be labeled as equity, but blank-check companies and auditors are leery of scrutiny, said Scott Norris, principal at UHY LLP.

“The problem is with what we don’t know,” Norris said. “This is the part that makes audit firms a little nervous, is that you don’t know when the SEC is going to start reviewing these filings if they’re going turn around and come back with something else.”

The play-things-safe approach could change as more blank-check companies slowly line up to go public. Law firm White & Case LLP even published a client note outlining ways to set up warrants to be labeled as equity.

One company, a New York-based SPAC that raised $40 million in its initial public offering, debuted in late April with warrants to investors whose terms allowed them to be accounted for as equity.

TradeUp Global Corp. did so by tweaking two terms that essentially puts more power in the hands of the company as to when the warrant holder can cash in on the incentive. This makes the warrants lean toward equity classification.

Another SPAC with equity-classified warrants also is in the pipeline. In a May 26 registration statement, Fortune Rise Acquisition Corp. said it will offer warrants with a similar structure and also account for them as equity.

These shell companies—both audited by Friedman LLP—acknowledge that they are outliers. In their securities filings they warn that if they got the accounting wrong, they’ll “incur significant expenses” to switch to liability classification and potentially have to redo their financial statements.

The labeling of a warrant as equity or as a liability doesn’t change the economic terms of the arrangement or the money at stake. But the classification still matters to companies that don’t want extra liabilities on their balance sheets.

The label also has behind-the-scenes accounting consequences. Under ASC 815, liabilities must be measured every reporting period at their fair value, a judgmental call that sometimes requires hiring expensive valuation specialists. Measuring something at fair value inherently means its value can fluctuate. This causes swings in earnings, which requires explanations to investors and analysts.

“The private company looking to be acquired by a SPAC, at the end of day, they care most about the money; they care less about whether that money is classified as a liability or equity,” said Michael Cohen, partner at Friedman LLP. “The problem is post transaction. That company wants to present the best balance sheet possible.”

A SPAC that offers a way to minimize unpredictable swings in earnings may be more attractive to a private company looking to merge with a blank-check company, Cohen said.

But the market is dominated by SPACs with warrants accounted for as liabilities thanks to the SEC’s message about accounting errors. More than 400 blank check companies are courting private company targets and almost all of them have warrant liabilities on their balance sheets, said Brian Hecht, partner at law firm Katten Muchin Rosenman LLP.

“Every SPAC has liability treatment and there’s nothing they can do about it,” Hecht said. “And so the market I expect will find a way to understand what these numbers mean and not get bogged down on it.”

To contact the editors responsible for this story: at jharrington@bloombergindustry.com; at vmathur@bloombergtax.com