Mandatory sustainability reporting standards are brewing for companies in the run up to the UN Climate Change Conference starting this weekend, posing the question of what course the U.S. will choose if it spurns the path chosen by other industrialized countries.

“The decision has been taken to use IFRS, and other standards are dead,” Richard Murphy, an accounting professor at Sheffield University who has written extensively on sustainability reporting, said, referring to environmental, social and governance (ESG) reporting standards being developed by the IFRS Foundation, parent of the International Accounting Standards Board. An announcement will be made at the Glasgow meeting, he added.

The IFRS has said that the formation of the International Sustainability Standards Board will be announced before the start of the UN conference,and Murphy said that he expected an announcement would be made at the Glasgow meeting that all COP 26 participants would use ISSB standards.

While the main focus of the climate conference will be on getting governments to commit to ratcheting down their greenhouse gas emissions, supporters of the foundation’s ESG standards argue that the measures will provide critical metrics for helping companies to meet their goals.

Among major economies, only the U.S. doesn’t use international accounting standards. The Financial Accounting Standards Board (FASB) oversees U.S. accounting standards but the Securities and Exchange Commission has been at the center of the Biden administration’s discussions on the country’s climate change role in sustainability reporting.

So far, the SEC hasn’t said whether it will join that international initiative, and it didn’t respond to several requests for comment on the matter.

The U.S. has publicly backed goals of the climate change conference, and SEC Chairman Gary Gensler has indicated climate change disclosure rules are coming as early as this fall without being specific on their scope. 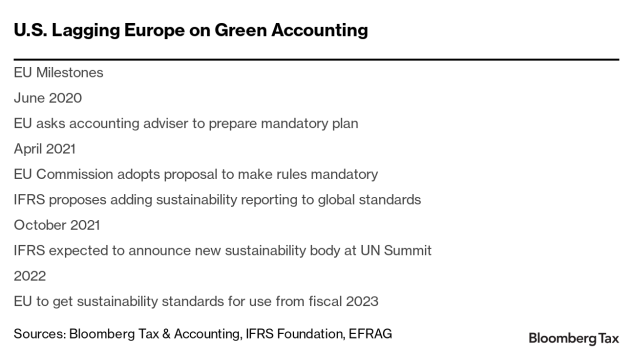 Commissioner Allison Lee, in referring to U.S. acceptance or reliance of standards the ISSB issues, urged parties last week to “seek ways to collaborate across jurisdictional boundaries to promote consistency in climate-related disclosure.”

Fellow Commissioner Hester Peirce, however, in comments in July, said that using the IASB’s parent to set ESG reporting rules could blur the lines between ESG and financial reporting.

“I urge the IFRS Foundation not to wade into sustainability standard-setting,” she said.

The IFRS Foundation hasn’t even formally established the new ESG standard setter, which is to be called the International Sustainability Standards Board, and doing so will require a change to its constitution. A spokeswoman said last week that “the trustees are on track to make their final determination” before the Oct. 31 start of the conference.

The ISSB doesn’t have a boss or any members in place, nor have its plans come into focus. The IFRS Foundation has said that it will concentrate initially on climate change and then introduce standards covering the full range of ESG issues over time, and that it will focus on giving information to investors. No detailed decisions have been made on which areas it will tackle after climate, or when.

“The fear is that IFRS will drive out wider reporting initiatives,” Eric Hespenheide, chair of the Global Reporting Initiative, said in an interview. GRI is one of the largest voluntary ESG reporting standard setters. It is working with the EU, which is drafting its own set of mandatory reporting standards for larger companies.

U.S. companies with European subsidiaries will have to follow the new European rules, de Cambourg said.

“We’ll require the full gamut of sustainability disclosures from the start,” he said, adding that more detail would be added to evolve the standards over time.

European disclosure requirements will be grouped around ESG matters, with detailed requirements for specific industrial sectors.

The European Commission in April added sustainability reporting to its disclosure requirements for companies employing more than 250 people, subject to the approval of the European Parliament and EU Council. When the legislation has passed, EFRAG will submit the actual standards to the Commission in October 2022 for use in fiscal year 2023.

EU standards will build on those being developed by the IFRS, which are aimed narrowly at financial investors, De Cambourg said.

“We’ll make companies report on the damage they cause to the outside world, as well as the dangers they face from things like climate change,” he said.

The question remains of what Washington plans to do.

“I don’t expect the U.S. to adopt European standards, which are focused on our own economic and social priorities,” de Cambourg said. “But two parallel systems could emerge, in the same way as FASB and IFRS accounting standards.”