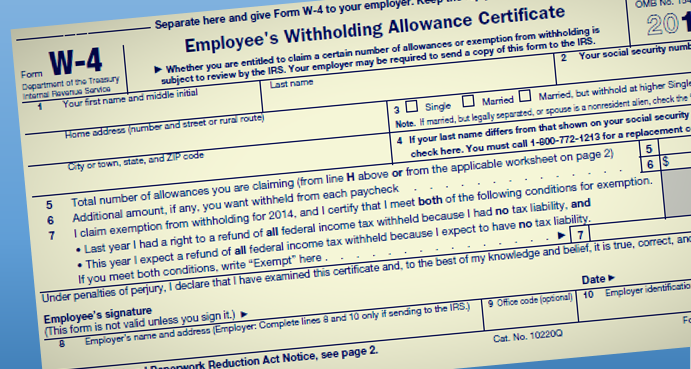 Employees are not to be required to submit the revised 2020 Form W-4 unless workers modify withholding amounts after 2019, an Internal Revenue Service official said May 2.

Revised withholding methods are expected to be compatible with versions of Form W-4, Employee’s Withholding Allowance Certificate, issued before 2020, so older versions of the form may be able to remain on file, said Scott Mezistrano, IRS representative for industry stakeholder engagement and outreach.

The IRS does not have the legislative authority to require employees to file a new W-4, Mezistrano said during the agency’s monthly payroll industry teleconference. The revised form and withholding methods are to reflect the suspension of personal exemptions under the tax code overhaul (Pub. L. 115-97), which took effect Jan. 1, 2018.

Employers are not to be allowed to accept pre-2020 versions of Form W-4 after Dec. 31, 2019, Mezistrano said. Employees seeking to change withholding in 2020 are to submit the new form, he said.

The second draft of the W-4 is the one service providers and employers are expected to use to program systems in preparation for 2020, Mezistrano said.

The pilot verification program for Forms W-2, Wage and Tax Statement, also was discussed during the teleconference. A review of the program found that 37.6 million 2018 W-2s had codes included on the form, up about 21% from the 2018 filing season, said John Chapman, an official in the IRS return integrity and compliance office.

The Return Review Program, which is one of the agency’s fraud-detection systems for electronically filed tax returns, processed 147.4 million W-2s in the 2019 filing season, Chapman said. The verification code program had four possible match results: an exact match of the code; an inexact match of the code, with at least one incorrect digit; a code not entered on the return when one was expected; or a code entered on the return when one was not expected.

There were about 13.7 million exact code matches, compared with about 500,000 inexact matches, Chapman said. The number of exact matches was up 34% from the 2018 filing season, he said. About 22.5 million codes were not entered, and about 815,000 codes were entered when one was not expected, he said.

The 16-digit verification code, which appeared in Box 9 of 2018 W-2s, was added by many of those electronically filing individual federal income tax returns so the IRS could authenticate that the form’s data was linked to a legitimate W-2.

Although the IRS said the 2018 processing year was the last that the verification code program would operate as a pilot, agency officials said they would analyze the program’s results and determine whether it should be implemented for all payroll providers and employers. The agency also said that if it determines the program should be implemented, more resources would be needed to comply with security standards required by the National Institute of Standards and Technology.

Box 9 of the 2019 form no longer indicates it is for the verification code.