When Covid-19 came to the U.S. in early 2020, the two states reacted similarly, shutting down in-person schooling and indoor dining and urging residents to stay home. Through some combination of that quick action, March weather that’s conducive to spending time outside and keeping windows open, and pure luck, both largely avoided the initial spring 2020 Covid wave that took so many lives in New York City and elsewhere in the Northeast. They have also had similar success in vaccinating older residents, which for the past year-plus has been by far the most effective way of preventing Covid deaths.

Yet California and Florida are widely seen as representing opposite poles of Covid policy — with some justification. According to the Oxford Covid-19 Government Response Tracker, which quantifies public-health policies on a stringency index, the states’ approaches diverged in late-summer 2020 and stayed far apart until a couple of months ago. 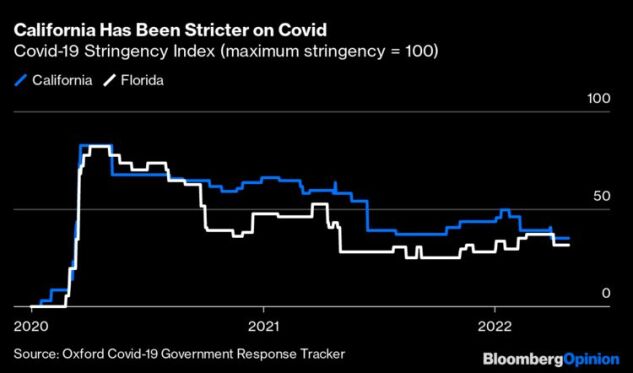 The divergence was most pronounced in schooling. Florida Gov. Ron DeSantis ordered all Florida public schools to provide in-person instruction in fall 2020. There was resistance, and a court challenge, but according to Burbio’s K-12 school opening tracker Florida’s percentage of in-person school days was third-highest among the states in the 2020/2021 academic year. California, where Gov. Gavin Newsom allowed schools to reopen in fall 2020 if local infection rates were below a certain level but few did, and the largest districts stayed remote for the entire school year, came in dead last. Other differences included a rapid return to indoor dining in Florida but not California, as well as opposite approaches to mask and vaccine mandates, with Florida’s DeSantis generally opposed (even signing legislation in November 2021 that banned most of them) and California’s Newsom in favor. Another telling contrast: Florida’s Disney World reopened in July 2020, California’s Disneyland in April 2021.

These differences, along with all the similarities outlined above, mean that California’s and Florida’s Covid outcomes might actually shed some light on the effectiveness and side effects of their differing Covid-fighting approaches. Since March 2020 there have of course been lots of premature attempts at comparing states’ success or failure in keeping Covid in check that were made to look silly by subsequent events. This effort may be premature, too, but with U.S. Covid deaths nearing their lowest levels since the pandemic began one can at least hope it’s not, and in any case it seems fair enough to compare California and Florida at a point when both have been through four significant waves of the disease.

The headline outcome is that Florida’s Covid death toll relative to its population was 34% higher than California’s. Going by 2021 population estimates and the Centers for Disease Control and Prevention’s May 4 weekly release of Provisional COVID-19 Deaths by Sex and Age, 241 in 100,000 Californians have died from the disease, 12th lowest among the states, while 322 Floridians have, 28th lowest and well above the national Covid death rate of 302 per 100,000.

That shouldn’t be the last word, though, given how deadly Covid has been for the elderly and how many old people live in Florida. The state’s percentage of residents 65 or older is, at 21.3%, second only to Maine among the states. Its 75-and-older percentage is, at 9.7%, by far the nation’s highest. California’s percentage of 65-plussers is 15.2%, below the national average, and its 75-and-older percentage is 6.4%. Adjust state Covid mortality statistics to what they would be if all the states’ populations had roughly the same age distribution as the nation — as conservative activist and policy analyst Phil Kerpen has been doing for much of the pandemic — and Florida’s rate drops to 275 per 100,000, well below the national rate of 302, while California’s rises to 267.

That’s very close, and in a recent National Bureau of Economic Research working paper Kerpen, fellow conservative activist Stephen Moore and University of Chicago economist Casey Mulligan make a bunch of other adjustments (for pre-existing health conditions and several economic and social factors) that bump Florida’s overall “pandemic performance” up to 6th best in the nation and California’s down to 47th. So that’s one take. But age adjustments a lot, as this breakdown of mortality rates by age group illustrates. 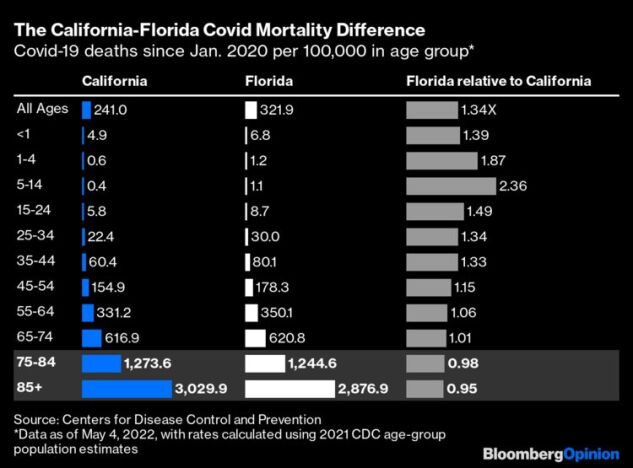 Young people have been much more likely to die of Covid-19 in Florida than in California, those 75 and older slightly less likely. Because Covid is so much deadlier for the old than the young, that works out to Florida having only a slightly higher age-adjusted death rate. But some of the age group differences are really big!

Florida’s Covid mortality rate for ages 5 to 14, for example, is more than twice California’s, a difference that seems like it probably has something to do with kids being physically in school in Florida but not in California during the 2020-2021 school year. Having restaurants, bars and other workplaces fully open may have contributed to Florida’s higher death rates for working-age adults. Florida has also vaccinated a smaller share of its young people and working-age adults than California — not all that surprising given the state’s lack of mandates and the fact that its surgeon general, a DeSantis appointee, has questioned the safety of Covid vaccines and against giving them to children.

As already noted, Florida has been about as good at vaccinating its elderly residents against Covid as California has. According to the official statistics it’s done even better, with 91.2% of Floridians 65 and older fully vaccinated versus 90.6% of Californians. That’s probably not accurate, given that Florida’s vaccination numbers were artificially boosted boosted by hundreds of thousands of out-of-staters who got their shots while wintering there, but the two states do not seem to have been all that far apart on this measure.

Those are some Covid-policy-related explanations for why young people in Florida have been more likely to die of the disease than their peers in California, and old people slightly less likely. But the differences between the two states’ all-cause mortality rates by age before the pandemic were so similar to the Covid disparities that there must be other forces at work too. 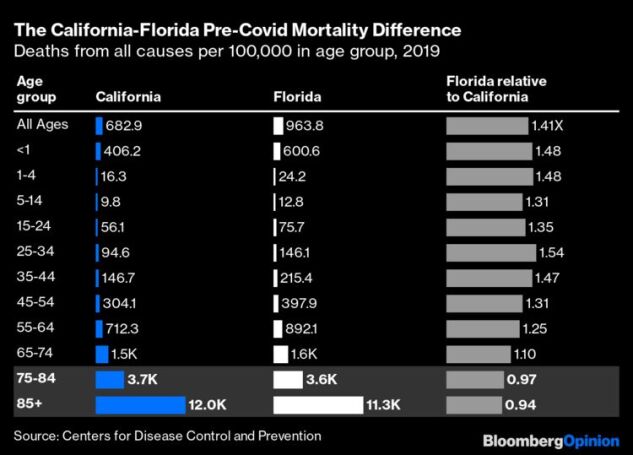 Older Floridians are different from their peers in California and most other states in that so many of them are from other states, and retired to Florida for the warm weather and low taxes (lots of people from other states used to retire to Southern California, too, but then it got expensive). These transplants are on balance surely more active and affluent than stay-in-state retirees, and can afford better medical care. In 2019, Florida ranked 19th among the states in life expectancy at birth and 6th in life expectancy at age 65 (California was second in both). Florida seniors are also less likely to live in multigenerational households than their California peers, which helps when a highly infectious disease is spreading.

Young Floridians, meanwhile, are a lot poorer than young Californians. They live in a state with much skimpier health care provision for the poor, and much higher rates of death from accidents and homicides, two big killers of the young.

One way to look at all this is that Florida takes good care of its old people and neglects the young — which you might expect given that about a third of the state’s voters are 65 or older, and more than half are 50 and older. But in the context of the Covid pandemic, another takeaway might be that Florida’s health outcomes haven’t been any worse relative to California’s than they usually are. The “DeSantis doctrine” on Covid has been defined as protecting the elderly while letting the young take risks, and that seems to have been pretty much what the state’s policies delivered.

The cost in additional Covid deaths of that risk-taking by younger Floridians was real, and undercounted by straight mortality numbers because so many years of potential life are lost when a young person dies. But there were costs to California’s stricter policies as well. Florida’s job market has recovered much more quickly, with payroll employment now 1.7% higher than before the pandemic while in California it’s still 1.7% lower. California has experienced faster growth in real gross domestic product than Florida since the end of 2019 — 3% versus 2.7% annualized (national GDP growth was 1.6%) — but that seems to reflect boom times for California’s tech companies more than the experience of most of its residents. There’s also evidence that remote schooling in California led to big learning losses, especially for poor and minority students.

Weighing such socioeconomic outcomes against mortality statistics is a fraught exercise that I’m not going to attempt here. But there’s a more direct comparison available. The pandemic has coincided with a big increase in homicides and accidental deaths among young people that many have blamed on lockdowns and other Covid policies (suicides are usually included in such claims, but according to CDC statistics they haven’t risen). I’ve generally been of the opinion that the pandemic itself was mainly to blame, but compare what’s happened to such deaths in California and Florida and it does seem like state Covid policies may have played a role. 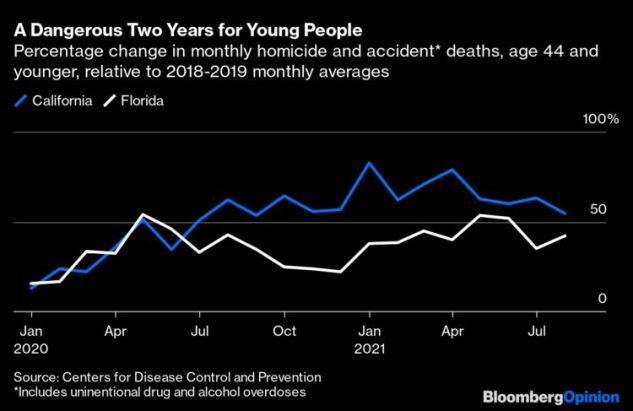 Florida had a much higher death rate from these causes to begin with (52.3 per 100,000 under-45 residents in 2019 versus 29.3 in California), and its death rate has remained higher. But the increase over the course of the pandemic has been much greater in California, with the disparity growing after the states’ Covid policies began to diverge in summer 2020 — which is hard to chalk up to the pandemic itself given that it hit Florida slightly or much harder, depending how you measure it.

One way to quantify this difference is that if California had experienced the same percentage increase in under-45 accident and homicide deaths from March 2020 through August 2021 that Florida did, 1,889 Californian lives would have been saved. If it had experienced the same Covid death rate among that age group over that period as Florida, 1,685 more Californian lives would have been lost.

The closeness of those two numbers is partly an artifact of the age cutoff I chose, and this whole column has taken a pretty haphazard approach to relating cause and effect. A more serious effort at causal inference might come to different conclusions, and you may draw different conclusions from the numbers I’ve shared here. But my takeaway from this exercise is that the two states’ very different approaches to battling the pandemic did not deliver obviously better or worse results.

It’s not that the school and restaurant closings and other non-pharmaceutical interventions that California stuck with much longer than Florida had no effect on the spread of disease. The very affluent and very Covid-cautious San Francisco Bay Area has suffered just 111 Covid deaths per 100,000 population, less than half the statewide rate and about one-third of Florida’s rate. Canada has done even better than that, with 104 Covid deaths per 100,000. In Australia it’s been just 29.

But states don’t have the same ability to shut their borders to disease that nations do, and most parts of California were less able and willing to social distance indefinitely than the Bay Area (worst-hit has been Imperial County, in the state’s southeastern corner, with a Covid death rate of 506 per 100,000). Also, for the past year or so vaccination rates, especially among the elderly, have been the main determinant of Covid mortality and California and Florida just aren’t all that far apart on that metric.

Speaking at the Conservative Political Action Conference in Orlando in February, DeSantis boasted that “had Florida not led the way, this country would look like Canada or Australia,” which deployed much stricter Covid measures. If that’s really so, he has lot to answer for: battling Covid as successfully as Canada would have saved 650,000 lives in the U.S., and equaling Australia’s performance would have saved 900,000. But if you don’t hold DeSantis responsible for the bungled national response to Covid, and simply compare Florida’s performance with that of other states, California in particular, his approach doesn’t look so terrible at all.

More From Other Writers at Bloomberg Opinion:

To contact the author of this story:
Justin Fox at justinfox@bloomberg.net

To contact the editor responsible for this story:
Susan Warren at susanwarren@bloomberg.net