Ready to do some holiday shopping? According to a recent survey by the National Retail Federation, nearly 2 million more people than last year are expected to hit the stores this holiday weekend. That works out to about 158 million people—up from 156.6 million in 2020 but still below the 165.3 million in pre-pandemic 2019.

And this year, shoppers should be prepared to open their wallets. Prices are on the move, a fact reflected in PNC Bank’s 38th annual Christmas Price Index, or CPI, which saw a 5.7% bump compared to 2019. 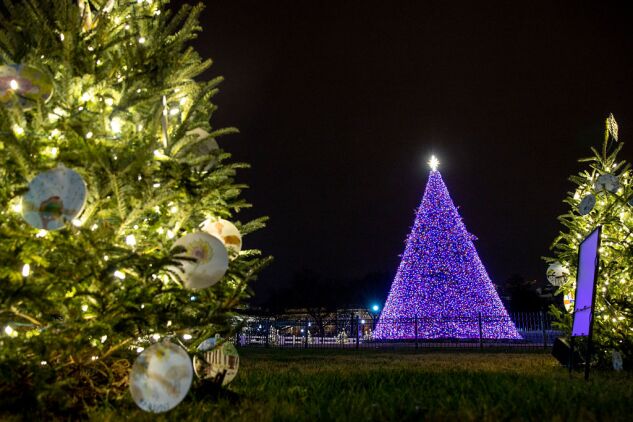 The CPI is an annual tradition that measures the cost of buying the gifts given in the classic holiday song “The Twelve Days of Christmas.” It was initially developed for inclusion in a holiday message to clients, but now it highlights market changes over time and is calculated using a method similar to the government’s consumer price index—also called CPI.

The government’s CPI measures the cost of goods and services for consumers in urban areas—basically, the cost of living. Each month, the U.S. Bureau of Labor Statistics reports on the CPI. It’s the most widely used measure of inflation since, as prices go up, the purchasing power of your dollar goes down.

Even if you’re not aware of the CPI, it impacts your tax picture: Since 1985, the CPI has been used to make mandatory annual adjustments to certain tax items, like the standard deduction amounts.

And since 2018, the IRS figures those cost-of-living adjustments using a “chained” CPI. The chained CPI measures consumer responses to higher prices rather than merely measuring the higher prices. In other words, if the price of some goods goes up, the expected response is to alter your spending to compensate for increases rather than simply spend more.

Here’s how that works. Let’s say that a plate of waffles costs $5 while a plate of pancakes costs $7, and each weekday I choose to eat pancakes, opting for waffles on the weekend, spending $45 per week. Now, let’s say that the cost of pancakes doubled to $14 while waffles only crept up by a dollar, and in response, I flipped the pattern, eating waffles during the week and splurging on pancakes during the weekend.

In contrast, a “chained” CPI calculation would reflect the actual change in my behavior and look like this: ($8 x 5) + ($14 x 2)/$45, or 1.5 times as much. That’s considered by many to be a more accurate capture of spending power.

Taking into consideration changes in behavior can offer very different results in both the government CPI and the PNC CPI. For example, the pandemic drastically affected the availability and prices of the 12 Days gifts in 2020. Amanda Agati, chief investment officer for PNC Asset Management Group, says, “With most live, in-person performances canceled in 2020, we removed them from the index last year, which resulted in an unprecedented 59% drop in the PNC CPI from 2019.”

That means, she adds, that “comparing 2019 data is a better gauge of the impacts of inflation, before the pandemic’s effects took hold of the global economy. We are trying to normalize the comparison by excluding a-once-in-a-century pandemic that had an out-sized impact on last year’s data.”

Inflation, as it translates into higher salaries, can bump taxpayers into higher brackets, resulting in the dreaded “bracket creep.” In response, the IRS makes inflation adjustments for certain tax provisions every year—there are more than 60 such moves for the 2022 tax year. For example, that means that next year, married couples filing jointly get a standard deduction of $25,900—up $800 from this year. For single taxpayers and married individuals filing separately, it rises to $12,950 for 2022, up $400, and for heads of households, the standard deduction will be $19,400 for tax year 2022, up $600.

And for taxpayers who are feeling generous, you’re in luck since the annual exclusion for gifts increases to $16,000 for calendar year 2022, up from $15,000 in 2021. That makes shelling out for those two turtledoves or five golden rings more tax-favored.

With live performances returning in 2021, those costs are factored back into the PNC CPI—but at a price. Services for performers jumped to $24,939.94, a 7.2% increase over 2019 for the Ladies Dancing, Lords-a-Leaping, Pipers Piping, and Drummers Drumming.

But services don’t reflect the most significant increases. Those honors go to the Six Geese-a-Laying (57%), Two Turtles Doves (50%), and Three French Hens (40%). Why? Higher fuel costs—today’s national average of $3.40 is $1.29 more than a year ago and 81 cents more than in 2019—mean that it’s much more expensive to pay for food and related costs to raise the birds. 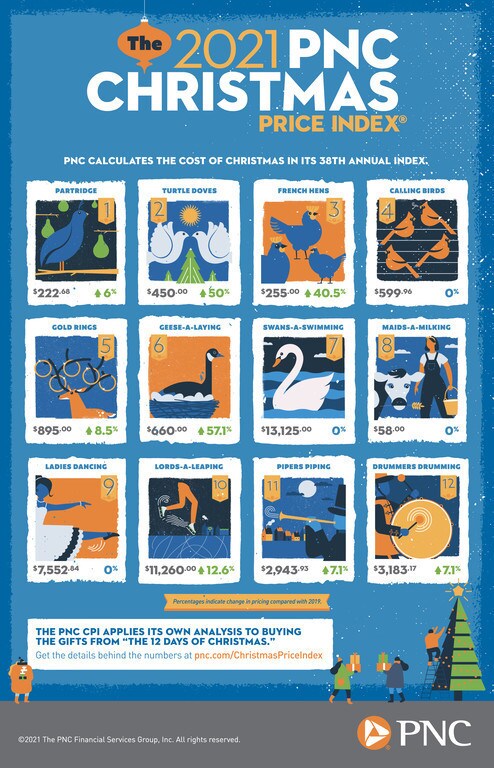 And despite the push in cryptocurrency prices, some investors still look to old-fashioned gold. The cost of gold rings is up 8.5% from 2019, reflecting an upward trend in market prices for the precious metal.

While no items decreased in cost, a few held steady, including the Eight Maids-a-Milking. With no change to the federal minimum wage since 2009, the price remained $58 in 2021.

Buying all of the items on the list for your true love would cost $41,205.58, an increase of 5.7%—about the same increase as the cost of living bump for Social Security in 2022.

That makes 2021 the most expensive year since 1984, when PNC’s predecessor bank in Philadelphia began calculating the cost of the list. The cheapest? 1995 when buying all of the items cost just $17,915.25.

Not ready to leave your home and brave the crowds? You can buy the items online, but it will cost you an additional $4,394, for a total of $45,599. While some items may ship for free, there’s no Amazon Prime equivalent for livestock purchases—yet.

True Cost of the 12 Days of Christmas

And if you’re feeling particularly spendy, you can buy all of the items on the list from all the song’s verses—counting each time it’s repeated. Purchasing those 364 gifts will cost $179,454, 5.4% more than in 2019.

While that’s probably not at the top of many wish lists, attaching actual dollar figures to holiday spending can help consumers better understand economic indicators.

“Like the index, consumer behavior is the drumbeat for the U.S. economy,” Agati explains. “With 70% of U.S. GDP tied to consumption, consumer health is key to future market performance. Keep an eye on guiding stars like retail sales, savings rates and consumer sentiment as indicators of the success of this holiday season.”

This is a weekly column from Kelly Phillips Erb, the Taxgirl. Erb offers commentary on the latest in tax news, tax law, and tax policy. Look for Erb’s column every week from Bloomberg Tax and follow her on Twitter at @taxgirl.

Kelly Phillips Erb
Editor
What You Need to Know About Making Charitable Gifts in 2021 (1)
It’s November 2021: Do You Know Where Your Workers Are?
Tax and Practical Strategies to Mitigate No-Shows in Business
When ‘I Do’ Becomes ‘Tax Due': Marital Tax Debts
© 2022 The Bureau of National Affairs, Inc.
All Rights Reserved