Fully understanding tax rules and the timings of tax relief changes could save corporate jet owners millions of dollars. Ryan DeMoor of MySky shares some key considerations on taxation in the corporate jet market.

No one wants to get a significantly larger tax bill than they were expecting, but that could be the reality for many corporate jet owners if they don’t act smartly and quickly. Whether it’s changes to the US tax code or a simple misunderstanding of how tax benefits apply, there are various ways in which businesses might be on the receiving end of a surprisingly large bill over the coming years.

Understanding the nature of tax benefits, as well as how the timing of acquisitions can determine organizations’ total tax owed, therefore could be worth millions of dollars for businesses. Here are some key considerations for organizations.

Recession fears have slightly cooled the corporate jet market from its very strong highs of recent years. Justified as some level of hesitancy might be, it could prove very expensive for corporate aircraft owners, given that two tax law changes in the Tax Cut and Jobs Act of 2017 suggest now might be a good time to accelerate fleet replacement plans.

Bonus depreciation has been a valuable means of reducing the tax burden on organizations owning and operating business jets since the early 2000s. Introduced after the Sept. 11 attacks as a means of stimulating the economy into recovery, it allows businesses to immediately deduct a large percentage of the purchase of price of eligible assets from taxable profits, as opposed to writing the value off over the “useful life” of the asset.

The policy began with a 30% deduction, which rapidly grew to 50%, and then a 100% deduction allowed on new purchases. This meant that a company could take the entire deduction in the first year of use of the asset. In the case of a new aircraft initially valued at $50 million, the entire amount could be used to offset income tax, reducing a company’s overall tax bill. While ultimately all depreciation is available without bonus depreciation eventually, the time value of money can have a significant effect.

The changes mean that the longer businesses leave it to update their fleet, the greater their tax bill could be as a result of the stepdown in the rate at which the value of the purchase can be used to offset tax.

With the presidential election coming in 2024, the market must be prepared for the possibility of further changes to the tax code. There are no guarantees that bonus depreciation will be extended. 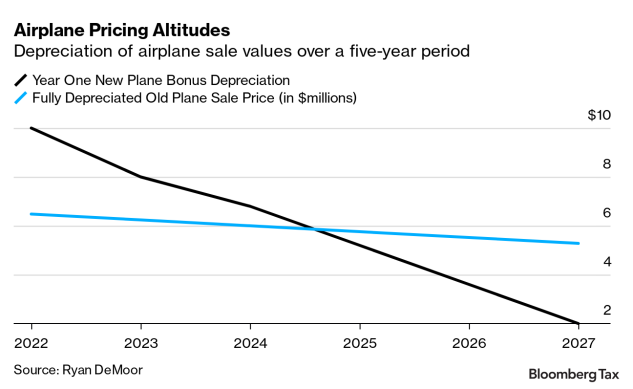 Dating back to 1921, the concept and tax law of like-kind exchanges relates to Section 1031 of the tax code, initially passed to address real estate and business assets.

A like-kind exchange meant that when an asset was sold, the gains made from the sale were not considered taxable income for the company if they were used to purchase a like-kind asset to replace the sold asset. If done correctly, the gain could be rolled into the tax depreciation of the purchase of the new asset, effectively deferring tax payment until the next sale. This rollover strategy could in principle continue ad infinitum, creating a situation in which no taxes would be due on an asset until an ultimate final sale.

However, the 1031 structure ended in 2017, when the TCJA was passed into law, repealing 1031 like-kind exchanges for all assets except real property. While this change in code cost companies the ability to move gains into a next purchase, any financial hit largely was mitigated by the tax benefits of 100% bonus depreciation.

The 20% ladder stepdown of bonus depreciation over the next five years means the market faces a gradual loss of flexibility in determining tax deductions for aircraft purchases while also having lost the ability to roll gains into future purchases. This lack of flexibility will inevitably cause some companies to have to pay a tax bill for the sale of an aircraft for the first time in a very long time. Companies enjoying 60 to 80 years of 1031 like-kind exchanges are now meeting a hard, cold end to their advantage.

Taken together, these changes should prompt corporate aircraft owners to seriously consider replacing aircraft imminently. Replacing one’s fleet prior to bonus depreciation disappearing buys time—around eight years, which is the average initial owned lifespan of a corporate aircraft—to see if the fiscal winds eventually change to a more favorable direction, whether that’s the reinstitution of bonus depreciation or the return of 1031s.

Financial and flight departments should prioritize collaboration to avoid an unexpected 60-year-old tax bill landing on their doorsteps at a time when they are unable to offset this through bonus depreciation.

Another important consideration for businesses is tracking requirements related to bonus depreciation, with only a proportion of an aircraft flown for business use eligible for this relief. This will mean tax is still owed on the proportion for which the jet is flown for non-qualified business use.

Not only must businesses be aware of this tracking requirement to avoid significant recapture hassle—or charges—but they also should note that unless the aircraft is flown for a minimum of 25% business use, it won’t be eligible for bonus depreciation at all. Not all situations are the same, and there are times when bonus depreciation shouldn’t be taken. Hiring competent aviation counsel and using sophisticated software will always help to ensure full use of potential benefits for any variety of aircraft ownership.

Ultimately, fully understanding how the rules and the timings in which different rates apply could be the difference between corporate jet owners saving millions—or being stung with a very expensive surprise.

Ryan DeMoor is head of aviation tax at MySky, where he oversees the tax vertical in the company’s suite of technology for aviation finance products. He manages the fully outsourced managed tax department as well as the development of MySky Tax, a new SaaS platform specializing in US aviation tax.