On Nov. 12, 2022, IRS Commissioner Charles P. Rettig’s term is set to expire. And now, we collectively wonder, as King George mused in “Hamilton,” the musical—"What comes next?”

There’s no named formal successor in the pipeline just yet to fill Rettig’s shoes. But here’s what the next nominee should know about the job.

What Does the IRS Commissioner Do?

Rettig’s successor will have a big job ahead. Commissioners preside over the nation’s tax system—not to create tax law but to establish and interpret tax administration policy, which includes enforcement and taxpayer services.

The IRS also is responsible for managing a significant workforce. In 2021, the agency had nearly 80,000 employees. While that’s a decrease from a decade ago, with new funding that number is slated to go up.

So how do you become IRS commissioner? And what does it take to be a good one? I figured no one knows better than someone who has been in the position before, so I asked former IRS commissioners. 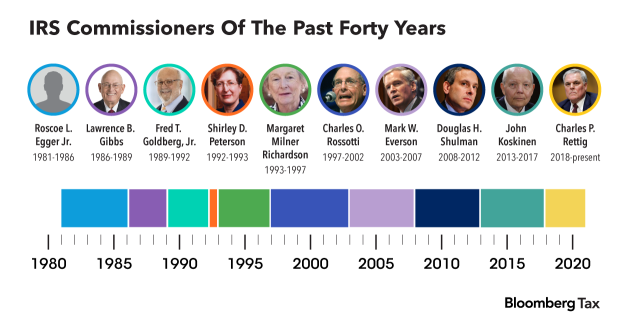 Lawrence Gibbs, currently senior counsel at Miller & Chevalier and IRS commissioner from 1986 to 1989, explained that he found out that he was on a short list for commissioner when then-Treasury Secretary Jim Baker called to ask him to come to Washington.

Even then, confirmation could be political. Despite the nomination coming from then-President Ronald Reagan, a Republican senator immediately put a hold on any vote to confirm Gibbs unless he agreed to revoke an IRS Revenue Ruling holding that abortion expenses were deductible. Gibbs initially declined, but eventually agreed to reconsider. The senator lifted the hold, and Gibbs was confirmed. Afterward, he wrote the senator to explain that because of Roe v. Wade, he couldn’t revoke the Revenue Ruling.

Charles O. Rossotti, who served from 1997 to 2002, didn’t know about any short list. He received a call asking if he wanted to talk to then-Treasury Secretary Robert Rubin about the job. The IRS was, like now, under a lot of criticism and attacks from the press. Rubin wanted a business executive to run the agency, so he reached out to Rossotti, who wasn’t initially interested. Eventually, Rossotti said yes because he thought it was an opportunity to do something meaningful as a public service.

John Koskinen was commissioner from 2013 to 2017 and had a similar take. He noted that he wasn’t sure there was a short list by the time Jack Lew, then-Treasury secretary, contacted him. At the time, the IRS was under attack in Congress about delays in processing tax-exempt applications. He was called, accepted on the spot, and two days later started the vetting process.

On television, it looks like the vetting process is pretty straightforward: answering questions in front of Congress. But Rossotti said it can be complex and expensive. You have to reveal a great deal of information, including your financial holdings. If you’ve been in business for a while, as he had, it can be a lot to parse.

Koskinen agreed that the vetting process can be complicated, primarily because of the need to review your tax returns in detail. Despite having earlier government clearances, he says, the process took two months to complete all the background reviews.

Nothing can prepare you for stepping into the role of commissioner, but Rossotti said experience running a business was a big help to him. It’s a lot of responsibility, he said.

Koskinen believes that listening was valuable. If you want to know what’s happening in an organization, he said, talk to the people doing the work. He held town hall meetings with IRS front-line employees and listened to what they thought the agency needed to do. He said it helped morale, too, since, for most it was the first time they’d seen and talked directly with the commissioner.

Gibbs stressed that acting in a bipartisan manner is a must for any IRS commissioner. He also felt that it was essential to manage expectations. He chose to adopt a limited program of goals, which included implementing the 1986 Tax Reform Act, preventing a reoccurrence of the 1985 filing season problems, and restoring the public’s confidence in the agency. Sticking to these objectives and handling the day-to-day demands were the most difficult challenges of the job. But achieving those goals tops the list of what Gibbs is most proud of from his tenure as commissioner.

Rossotti also cited restoring the public’s trust in the agency as one of his greatest accomplishments at the IRS. He said he helped steer the agency around to a reasonable degree, although he lacked one crucial thing: funding.

Koskinen counts supporting the morale of IRS employees under constant attack as one of his most significant accomplishments. He also cited reducing the number of taxpayers who were victims of identity theft and refund fraud through a public/private partnership called the “Security Summit” as a critical success. He said that according to the IRS strategic plan, that number is now down by 81%.

Advice for the Next Commissioner

Obviously, there’s no “how to be an IRS commissioner” playbook. So, how would our former commissioners advise their yet-to-be-named successor?

Koskinen would encourage the new commissioner to utilize available resources, namely employees. The IRS has a great workforce, he said, and the next leader should take the time to listen to what the employees have to say. He also would encourage the new commissioner to never make a decision on their own, but to meet regularly with the senior managers and involve them in discussing how to meet the inevitable challenges and hard questions.

Rossotti echoed the importance of building a team and setting priorities. He also said it’s important to communicate with the public honestly about what you’re planning to do. If you don’t set your own expectations, he said, someone will do it for you.

And with additional funding on the way, Gibbs said that the new commissioner should focus on how to best allocate and use the money to improve dealing with the public, the other IRS stakeholders, and non-compliant taxpayers.

That funding is vital.

Rossotti noted that the current administration staked a tremendous amount on getting additional funding to improve the IRS. It’s an excellent opportunity to improve the agency, but if the administration doesn’t get the nomination right, it could risk a massive setback. Without a leader, he said, it simply won’t work.

With all of those challenges, why bite?

This isn’t an entry-level position, and those who step up to the job have already established successful careers and reputations. Why give that up for a job in the public eye that subjects you to criticism? Words like “service,” “restoring confidence,” and “public good” peppered conversations about why the job is ultimately worthwhile. After all, the IRS directly affects more people in the country than any other organization, Rossotti notes, making it an opportunity to do something important.