Bloomberg Tax is taking a deep dive into the problems plaguing the Internal Revenue Service. We asked current and former government officials, agency watchdogs, and tax professionals to break down how the agency landed in such a dire situation and offer their plan for how the agency can fix itself. Follow the series here.

The IRS has lost about 20% of its full-time workforce since 2010. Reversing that trend will take a commitment to hire employees faster, train them better, offer them higher salaries, and appeal to their sense of public service, writes NTEU President Tony Reardon.

That is not the self-interested musing of a union president. It is the independent, professional, and bipartisan assessment of tax practitioners, agency auditors, consumer watchdogs, current and former commissioners, and anyone who has called the IRS with a question and been left hanging.

Sadly, there is broad consensus that American taxpayers are not getting the service they deserve and that our tax code is not being administered as fairly or as fully as it should be.

IRS employees will be the first to tell you that they share in the frustration over delayed refunds, unopened mail, and unanswered phone calls. When public servants are deprived of the tools they need to do the job, morale plummets.

The statistics speak for themselves. Overall, the agency has about the same number of employees as it did in 1974, largely due to repeated decisions by Congress to slash the agency’s operating budget. During the 2010s, the agency lost more than 20,000 full time employees, or about 20% of its workforce. 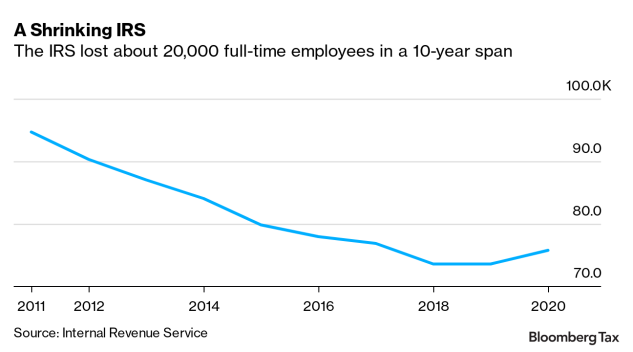 In 2010, there were 21,057 customer service representatives. Ten years later, the number was down to 12,422. There are half as many revenue officers and 35% fewer revenue agents than 10 years ago. Together, these three IRS positions are at the heart of the agency’s missions to assist taxpayers trying to comply with their tax obligations and catch those who aren’t.

Over those same 10 years, the workload grew. In just one small example, the number of Form 1040 returns went to 169 million from 142 million, according to the National Taxpayer Advocate.

Before leaping to the misguided “learn to do more with less” mantra of those who criticize an agency that brings in 96% of the revenue needed to run the country, consider this: When the phone starts to ring 1,500 times per second from taxpayers who need help, you need an awful lot of professionally trained civil servants on the other end with answers.

To its credit, the IRS has clearly identified the understaffing problem and articulated the damage it has caused: A tax gap that has probably grown to $1 trillion, according to Commissioner Charles Rettig, representing revenue that is rightfully owed to the U.S. Treasury but remains uncollected; substandard customer service rates; and backlogs of returns and correspondence.

The situation is now wholly unsustainable, and President Joe Biden and Congress are taking steps to reverse course.

The increased operating budgets for Fiscal Year 2022 and envisioned for 2023 are an essential start, but the agency is still struggling to fill its leaky workforce bucket. The IRS last year lost more than 14,400 employees to retirement and other separations, so hiring needs to be robust enough to replace what is lost to attrition and start to build back the decimated workforce, and that will take a multi-year investment from Congress, as originally outlined in Biden’s Build Back Better proposal.

The IRS workforce has an average age of 55, and more than 50,000 employees will reach the end of their careers over the next few years. But the loss is greater than the numbers. These veteran employees will take with them invaluable expertise and experience that cannot be magically replaced. A decade of budget cuts and scant hiring means an entire generation of IRS experience has been lost.

Based on what our members and chapter leaders tell us, there is a whole host of human resource challenges—beyond agency funding—to also consider.

For the entry level positions the IRS desperately needs for submission processing and accounts management to tackle backlogs, there are two substantial barriers: a slow hiring process and low wages. For example, the local Target stores in Kansas City are hiring at $20+ per hour. At the IRS Submission Processing Center in the same city, a federal employee hired at Grade 04, Step 1, earns $15.66 per hour.

Too often, an applicant—having waited months to hear whether they got an IRS job—never even makes it to new hire orientation because they found something else that provided a paycheck much faster. By no means is this an argument to scale back the background checks and high standards set by the IRS. But it is a sign that onboarding is cumbersome and long.

In this tight labor market, the federal government needs to move faster, highlight the benefits of serving your country, and do more to keep the employees already on board.

The tide is beginning to turn. The agency correctly reversed its plan to close a submission processing center in Texas and is using newly granted flexibility to speed hiring at multiple IRS facilities around the country. There is active recruiting at job fairs this spring, and the agency is beefing up its human resource offices.

We also encourage the IRS to resume more in-person new hire training. Budget cuts over the years reduced the training budgets, and virtual training is not a sufficient replacement for being able to interact with a veteran trainer. Too many employees leave the agency in the first year or two out of frustration that could have been avoided by being adequately prepared to do the job. A hiring surge doesn’t do much good if you can’t retain the employees you’ve got.

As the exclusive representative of the frontline IRS workforce, we know firsthand that the agency cannot be successful unless its employees are successful. Our goal at NTEU is to make sure employees are treated fairly and with dignity, and that they have a strong voice in the workplace. Collaboration between labor and management can resolve workplace problems before they worsen, and employees who feel valued and empowered can improve agency operations for the taxpayers they serve.

Anyone considering a career at the IRS should know that the job, at its core, is public service. Federal employees are focused on the societal good, not a company profit margin or shareholder dividend. Congress writes the tax code, but your IRS workforce is there to make sure the American system of voluntary tax compliance is sturdy enough to finance our country’s domestic and military needs.

When properly resourced, adequately trained, respected by management, and backed by their union, getting a job at the IRS can grow into a rewarding career of service.

Tony Reardon is the National President of the National Treasury Employees Union, which represents frontline federal employees at 34 federal agencies and departments and has represented IRS employees for 84 years.