The Inflation Reduction Act, passed over the summer to much fanfare, carries with it some provisions for electric vehicles. Chief among them is a sourcing requirement that mandates portions of materials that go in to the batteries be extracted or processed domestically—an effort to remain competitive in what may be the next big boom.

This may lead automobile manufacturers to opt for battery technologies that don’t require cobalt or nickel. The main technology available is lithium iron phosphate, which by all accounts appears to be safer, work for more recharge cycles, and able to operate in a greater range of temperatures. The downside is the technology has a lower energy density, which may lead to batteries weighing more per amp hour than lithium ion and prove a safety concern for pedestrians.

Tax policy shaping automobile production is not a new phenomenon. Care must be taken when provisions in the tax code incentivize or disincentivize one branch or another in an industry’s development—there can be unintended consequences.

If Bruce Springsteen was born in Levallois-Perret instead of Long Branch, he might have penned “Born to Run” (“Né pour Courir?”) about the freedom found under the dirty hood of his Citroën 2CV. You’ve seen the 2CV. It was probably in a black and white movie, and there might have been nuns driving it. Or you might have spotted it in “For Your Eyes Only,” driven by none other than James Bond. It rolls several times and is generally abused across the Spanish countryside before ultimately being taken off road straight down a cliff. 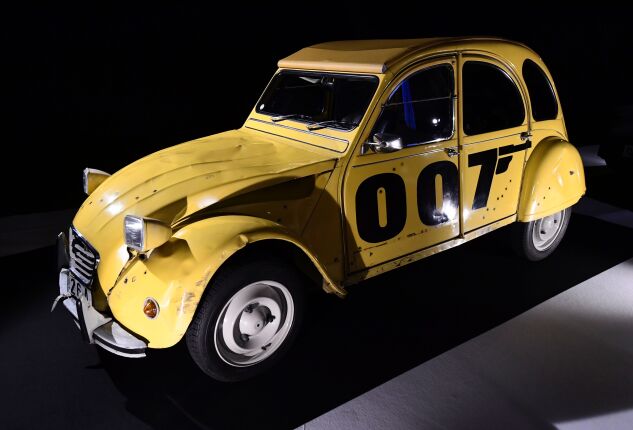 This photo taken on October 1, 2016, shows a Citroen 2 CV car used for the James Bond film “For Your Eyes Only” during the Paris Motor Show at the Porte de Versailles Exposition Centre in Paris on Oct. 1, 2016.
Photographer: Miguel Medina/AFP via Getty Images

The car was conceptualized in the early and mid-1930s but shelved during World War II. Production launched in 1948 and continued through 1990. Over that period, something like 3.5 million 2CVs were produced and sold. For context, Tesla has, as of the first quarter in 2022, sold a little less than 3 million cars since its inception. VW has sold about 23 million Beetles total.

The 2CV model number is an abbreviation that stands for two “chevaux-vapeur” or “steam horses.” The way French automobile taxes worked was as a progressive tax as engine power went up. However, engine power wasn’t defined as horsepower, but tax horsepower. There was also a handy formula for engines built after 1958:

The overarching idea was to progressively tax engine power and encourage the purchase of automobiles with smaller displacement, and thus more efficient, engines. But measuring horsepower wasn’t standardized to the point it is today, so coming up with a bespoke metric like “tax horsepower” and tying that to the amount taxpayers owed seemed reasonable.

This had a profound effect on the French automobile industry that is no better represented than by the 2CV. The 2CV had a 425 cubic capacity two-cylinder engine that weighed about 100 pounds. For contrast, a Honda Civic with a base engine is about 1,300 ccs today.

Owing to the way tax horsepower was defined, French manufacturers had incentive to build engines with narrower (bore) and shorter (stroke) cylinders. This led to 2CV engines that produced between 9 and a whopping 28 actual horsepower.

The nuanced way in which tax horsepower was defined in France, however, bolstered the domestic automobile market. Foreign car manufacturers needed to build versions of their cars for the French market if they wanted to keep the taxable horsepower low. Few manufacturers chose that route, and the 2CV and Citroën flourished long after neither vehicle nor brand was competitive on a global scale.

In tax policy, there is the idea of distortion: an unintended consequence of a given provision that results in a change in the market or consumer behavior. Tax mozzarella, for example, and everyone starts making their pizza with provolone (a scary thing to imagine).

It’s pretty clear that a move toward EVs is a net win for the environment; tax incentives are a great way to support a burgeoning industry and offset the increased cost to the consumer. Jobs are good, and encouraging domestic production in a sector that is likely to be vibrant for the foreseeable future makes good political sense.

However, a quick phrase such as “we’re going to make sure they’re built in America, too!” can carry with it myriad knock-on effects. Some such effects produce quirky cars like the Citroën 2CV, but others may lead to gazillion-pound pickup trucks that can’t feasibly be stopped in time for a pedestrian in a crosswalk.