A tourist boat and the beautiful city of Zell/Mosel pictured with the wine vineyards on Sept. 24, 2018, in Zell, Germany.
Photographer: Thomas Lohnes/Getty Images

Fewer than half of U.S. workers are aware of the saver’s credit, a tax credit available to low- to moderate-income taxpayers who contribute to tax-advantaged accounts. Transamerica Institute CEO and President Catherine Collinson shares how this credit can play an even greater role in helping people save for retirement.

Did you know the IRS has a tax credit that pays people to save for retirement? If not, you are not alone.

Fewer than half of U.S. workers are aware of the saver’s credit, a tax credit available to low- to moderate-income taxpayers who contribute to tax-advantaged accounts, according to findings from a new research report led by my team at Transamerica Center for Retirement Studies® (TCRS) in collaboration with Transamerica Institute®.

As our nation is confronting major concerns about retirement security amid relatively low levels of retirement savings and the estimated depletion of the Social Security trust funds in 2034, the saver’s credit can play an even greater role in helping people save for retirement.

What is the Saver’s Credit?

The saver’s credit, referred to as the Retirement Savings Contributions Credit by the IRS, is a tax credit above and beyond the tax-favored treatment of retirement accounts. It may be applied to the first $2,000 of voluntary contributions that an eligible taxpayer makes to a 401(k), 403(b), or similar employer-sponsored retirement plan; a traditional or Roth IRA; or an ABLE account in the past year.

The maximum credit is $1,000 for single filers or individuals and $2,000 for married filing jointly. The amount of tax credit is 50%, 20%, or 10% of the taxpayer’s contributions to qualified accounts for the year, and the percentage also depends on their income.

The adjusted gross income limits for 2022 tax year are:

Additionally, the taxpayer must be age 18 or older, cannot be a full-time student, and cannot be claimed as a dependent on another person’s tax return. Importantly, the saver’s credit is not refundable, meaning that the taxpayer can only receive the credit up to the amount of their tax liability.

The IRS offers an online tool to help determine if you are eligible for the credit.

History of the Saver’s Credit

The saver’s credit was established with the enactment of the Economic Growth and Tax Reconciliation Relief Act of 2001 and made permanent with the Pension Protection Act of 2006, both laws being the culmination of long-standing bipartisan efforts to improve retirement security. The saver’s credit was the first major legislation focused on promoting tax-qualified retirement savings among low- to moderate-income workers.

Since its inception, policy experts have pointed out that the number of people benefiting from the credit is limited because it is not refundable, meaning that the amount of the credit cannot exceed a tax filer’s tax liability—and many low- to moderate-income workers have little or no tax liability. TCRS agrees with this assessment but also believes that many eligible workers may be missing out on the saver’s credit simply because they are unaware of it.

The Imperative for Raising Awareness

Without widespread awareness, eligible people who are saving for retirement may unwittingly overlook the saver’s credit when preparing their tax returns. Among those who are not yet saving, learning about the saver’s credit might be the nudge to get them started.

According to TCRS’ survey findings, awareness of the credit among workers employed by for-profit companies has risen to 48% in 2021 from 23% in 2007. However, recent survey findings have surfaced major disconnects among segments of this population. 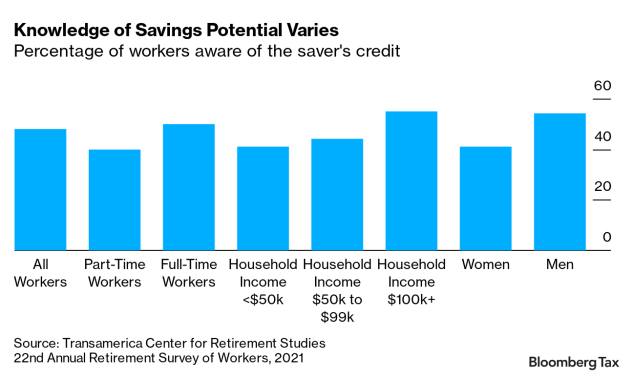 Employer-sponsored workplace retirement plans have proven to be the most effective way to engage workers to save for retirement—and to make them eligible to potentially benefit from the saver’s credit. According to the same survey findings, almost three out of four workers (73%) are offered a 401(k) or similar plan. Yet only 51% of part-time workers, 60% of workers with an HHI of less than $50,000, and 69% of female workers are offered a plan. 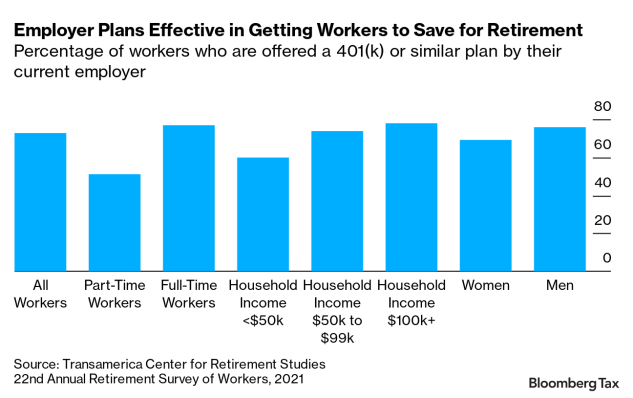 These disparities and other contributing factors translate to stark differences in retirement savings among at-risk segments and illustrate the helpful role the saver’s credit can play in promoting savings.

TCRS found that workers with an HHI of less than $50,000 have saved $3,000 in all household retirement accounts, compared with savings of $172,000 among those with an HHI of $100,000 or more (estimated medians). Furthermore, part-time workers report having saved less than half that of full-time workers, and women’s retirement savings continue to be a fraction of that of men. 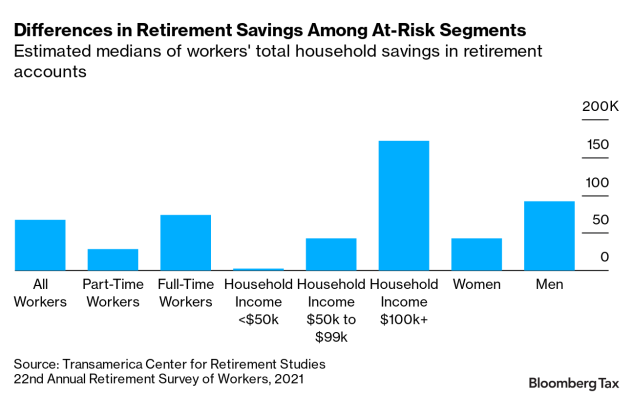 Enhancing and Expanding the Saver’s Credit

Policymakers are currently considering bipartisan retirement legislation and contemplating a variety of reforms that can enhance the reach and effectiveness of the saver’s credit, and they should be applauded for their efforts. TCRS encourages them to consider the following recommendations that could help more Americans benefit from the credit and improve their retirement outlook:

In addition to public policy efforts, we can all help promote the saver’s credit through a grassroots effort by telling our families, friends, and colleagues about it. By spreading the word, we can make a significant difference in people’s lives and in our community’s future well-being.

Catherine Collinson serves as CEO and president of nonprofit Transamerica Institute and its operating division Transamerica Center for Retirement Studies, and she is a champion for Americans who are at risk of not achieving a financially secure retirement.