Sometimes, an unexamined word choice can lend clarity to how individuals see themselves in the context of broader society. For instance, if you’re driving down the New Jersey Turnpike rocking out to Bruce Springsteen when you suddenly come to a halt, you aren’t stuck in traffic—you are part of traffic. And when the jam does get moving, everyone going slower than you is a moron and everyone going faster than you is ... well, George Carlin delivered it better. You get the idea—a casual turn of phrase can be instructive in distilling down a central truth that a direct line of questioning might obscure.

If you started a new job, and someone asked you how much it paid, you might give a nice, round number that reflects the amount on your offer letter. If they quickly did the math and told you what that would amount to per month and insinuated that maybe you should pick up the tab tonight, you might say it isn’t what you actually get “after taxes.” This gives the impression that there is someone out there in your position who doesn’t have to do that calculation. Otherwise, what would the offer letter number even represent if no one will ever actually get paid that figure? Those income taxes must be optional.

The concept of “after tax” income suggests there is a “pretax” income and is anti-tax propaganda, as it obscures the connection between taxes paid and services received. If income exists prior to taxes being paid, those taxes needn’t be paid for the income to be received—they are not facilitating the activity that gives rise to the income. There is no such thing as after-tax income because there is no such thing as pretax income. The former is merely income, and the latter is a fallacy. Tax professionals should steer away from the phrase in favor of language that gives a more accurate view of tax as a necessary precondition for market activity and, thus, employment that gives rise to income.

This observation is not new. It was articulated by economist Carl Shoup in 1969 and formed the basis of a fantastic book by Liam Murphy and Thomas Nagel 20 years ago. But the distinction between pretax and after-tax income continues to be made. It is sticky in part because it reinforces the idea that taxes are not paid but taken, that there is some reality wherein the amount in your weekly check would be the amount on your offer letter divided by 52.

Framing is important. That’s why your employer is incentivized to quote you the larger figure despite knowing you aren’t ever going to receive that amount. Calculating your precise take-home pay would be difficult, as the employer would need to know your filing status and other aspects of your financial situation. But they are going to get that information, and they are going to be tasked with handling withholding and remittance. So they definitely could tell you. 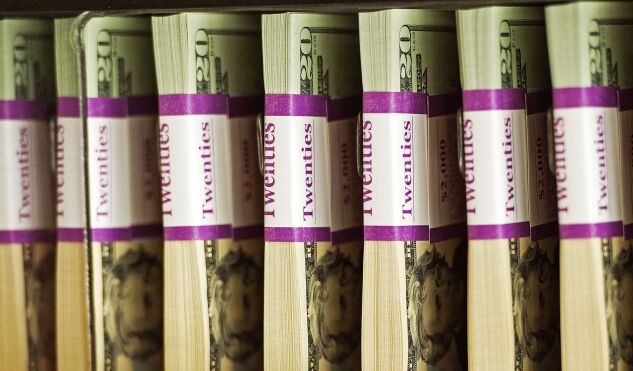 Bundles of $20 bills roll through the printing press on July 12, 2012, at the US Bureau of Engraving in Washington, D.C.
Photographer: Paul J. Richards/AFP via Getty Images

We generally have terms for things we encounter as often as so-called after-tax income that don’t require modifiers. We don’t call the difference between amounts earned and amounts spent “after costs profit” because “profit” suffices. The term already encompasses its relation to costs. There is no equivalent term for “after tax” in common parlance. “Income” should fit the bill, but we’ve already defined that as our actual income plus the taxes we owe in exchange for earning it.

Income Exists Only After Taxes are Paid

Income is only possible after services are received in exchange for taxes paid—the slate of protections afforded so two sides can enter a contract with some understanding on the part of both parties that its terms will be fulfilled. It is a matter of accounting that the math is done at the time of payment, but the general debt has already been incurred.

A better way to look at it is to view salary as an output from the inputs of labor and taxes. When one engages with the workforce, a debt is incurred for the services rendered by the state to create the conditions for employment. That debt is repaid at the time one is remunerated for one’s labor and, as such, there is no “income” until after repayment. Whether the debt is paid at the time of the employee’s payment through withholding or when payment is remitted, as in the case of a self-employed individual, is merely a matter of accounting.

Why Is This Way of Thinking Harmful?

The latest data from the IRS puts the tax gap at about $440 billion per year as of a decade ago; today’s figure may be substantially higher. We operate on a voluntary tax system. As a society, we tell the government what we have earned and what we owe, and then we pay up. There are ramifications for fudging numbers, but the IRS can’t audit everyone, and most of us are operating on the honor system. Anything that suggests taxes are optional can cost billions in the aggregate.

When we speak of pretax income, we are not only disconnecting the idea of taxes as fees paid to purchase the opportunity for income; we also are obfuscating the terms of the contract we’ve all entered into when we earn money. What should be a matter of accounting—paying for the services received for income to be generated—becomes “taxation is theft.”

This is a regular column from tax and technology attorney Andrew Leahey, principal at Hunter Creek Consulting and a sales suppression expert. Look for Leahey’s column on Bloomberg Tax, and follow him on Mastodon at @andrew@esq.social.