Cannabis industry participants face a tough battle under a litany of regulations that may not change much in the near future. Transfer pricing rules must be considered and acted on properly to avoid even more tax problems for these businesses, say AB FinWright’s Simon Menkes, Abraham Finberg, and Rachel Wright in this edition of “A Closer Look.”

Judge Learned Hand, who served on the US Court of Appeals from 1924 to 1951, once said, “Any one may so arrange his affairs that his taxes shall be as low as possible; he is not bound to choose that pattern which will best pay the Treasury; there is not even a patriotic duty to increase one’s taxes.” No group of people has taken Hand’s pronouncement more to heart than cannabis business owners, perhaps because no group of people has faced such a mountainous collection of taxes as has been placed on the backs of the cannabis industry.

Background on the Cannabis Industry

This means that only cost of goods, or adjusted basis in the inventory sold that is an amount used to arrive at gross profit, can reduce income. But no other deductions are allowed—only the cost to produce, or cost of the product sold or resold, can be deducted.

To benefit from this more favorable treatment, many cannabis companies have become vertically integrated so they can better control the cost of the supply chain and the outlet of sale to the end consumer. Within the vertical, they have combined production (as manufacturer or cultivator) with resale (distributor) or retail (store front and/or retail delivery)—and possibly have combined all three. The motivation for these integrated taxpayers is to increase the cost of goods sold for the resale or retail side of the business so they can deduct more of their costs by capitalizing them into inventory. This means that if a producer can argue for a higher selling price to its retailer, the retailer will have more costs of goods sold from the producer, and the producer will have more costs to deduct because of the allowance of indirect costs. 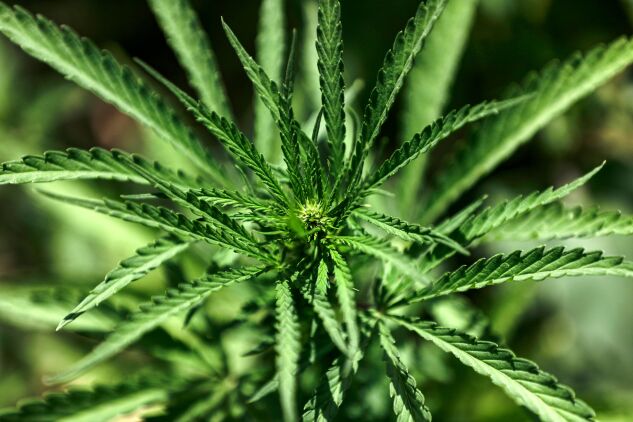 This picture taken on July 29, 2020, shows a view of a cannabis plant in the village of Yamouneh in eastern Lebanon’s Bekaa Valley.
Photographer: Joseph Eid/AFP via Getty Images

Sometimes, the shifting of costs runs afoul of the Section 482 transfer pricing rules, as it requires a clear reflection of income under the arm’s-length principle. Integrated cannabis businesses rarely discuss these rules. Staying on top of all the nuances of tax law is difficult enough in the industry, and tax professionals have more than a full-time job keeping up with the obvious ones. Transfer pricing is a more subtle foe compared to Section 280E, but it must be addressed for those operators attempting to control the supply chain.

The IRS considers transfer pricing wherever related parties have transactions among themselves, such as sales of goods or services, rents, loans, or intangible property transfers. The IRS district director is empowered to “make allocations between or among the members of a controlled group if a controlled taxpayer has not reported its true taxable income. ... In such case, the District Director may [re]allocate income, deductions, credits, allowances, basis, or any other item affecting taxable income [to achieve] an arm’s length result.”

Transfer pricing applies when two or more organizations, trades, or businesses are controlled by the same interest. The tax code doesn’t define control for purposes of transfer tax and is not limited by the definition of control stated in Section 368(c). Control could be considered as “acting in concert or with a common goal or purpose” (Treas. Reg 1.482-1(i)(4)) and may not be limited to owning a majority interest in one or more businesses.

If a cannabis business is considered a producer, however, Section 280E is less of an issue. While Treas. Reg. 1.471-3(b) states that retailers and resellers of merchandise are only allowed the invoice price less trade or other discounts, Treas. Reg. 1.471-3(c)(1) states that indirect production costs can be added into inventoriable costs, including an appropriate portion of management expenses. Section 471(a) further favors producers as it emphasizes that only inventoriable costs and the use of inventories are necessary to clearly reflect income.

Sometimes it’s difficult to find exact comparable transactions under comparable circumstances. In this case, a transfer study should be conducted and, using the Best Method Rule discussed in Treas. Reg. 1.482-1(c), a method selected that provides the most reliable measure of an arm’s-length result. A transfer pricing study will allow a producer to successfully argue for a higher selling price to its retailer, and the retailer will be able to support their having more costs of goods sold from the producer.

Because cannabis producers are able to classify more expenditures as cost of goods sold, by working together, non-producers (retailers and distributors) attempt to shift more of their income to producers (cultivators and manufacturers), effectively reducing the group’s overall taxation. The IRS is critical of such income shifting.

Section 482 states that any transfer of goods or services must be done at prices similar to what would have been achieved using an arm’s-length transaction with an uncontrolled, unrelated third party. With a recent $80 billion infusion from Congress, the IRS is even more likely to conduct transfer pricing audits of the cannabis industry, resulting in much higher tax assessments and significant penalties. The solution: a transfer pricing study that supports the cannabis group’s pricing structure.

Transfer pricing methodology considers each transaction’s circumstances. Select a method for use in your study that provides the most reliable measure of an uncontrolled or arm’s-length result. Taxpayers should consider whether, if a cannabis cultivator were to sell its product to an unrelated distributor, the market or sales price would be equivalent.

In determining the comparability of controlled and uncontrolled transactions, review these factors: functions, contractual terms, risks, economic conditions, and type of property or services. Recordkeeping accuracy is also vital. This has historically been difficult for the cannabis industry because of lack of banking availability. Cash vaults and logs, as well as backup documentation, have gotten better but are still not the industry’s strongest proficiency. The completeness and accuracy of the data will be crucial in identifying differences in comparability.

Functional analysis. A thorough transfer pricing study relies on a functional analysis and will require coordination with individuals within and consultants serving the organization. Site walks may also be required to observe operations and interview management. A cannabis cultivation may have different grow methods, with differing techniques of ventilation, lights, and watering. Such processes determine the set of comparables available and should be documented.

Available transfer pricing methods. Treas. Reg. 1.482-3(a) suggests pricing methods for analyzing wholesale transactions involving tangible personal property, such as those from a cannabis cultivation to a distributor or from a cannabis distributor to a retailer. Transactional methods include comparable uncontrolled price method, or CUP; resale price method, or RPM; and cost-plus method. Profit methods include comparable profits method, or CPM; and profits split method, or PSM.

As in any industry, these factors of comparison may vary widely. Cannabis businesses in different jurisdictions may have completely different geographic market conditions. A new market such as New York may have a scarcity of supply, while a more mature market like California may have an overabundance. Indoor cultivation often commands a higher price than an outdoor cultivation. A party that leases land will have different assumed risk than one that owns its land.

CUP and RPM are two transactional methods that could be used in cannabis. Using the CUP method implies that products, economic conditions, and contractual terms are comparable factors. The CUP method outlined in Treas. Reg. 1.482-3(b) may be used where there is a similarity of products. Because even minor differences in contractual terms or economic conditions could materially affect the amount charged in an uncontrolled transaction, comparability under this method depends on these factors being similar, or that there be adjustments to account for any differences.

Use of the RPM implies that the functions performed, risks, contractual terms, product category, significant differences in value of distributed goods due to the value of a trademark, and others (such as cost structures, business experience, management efficiency) are comparable or at least considered. The RPM evaluates a controlled transaction by comparing the gross profit margin realized to those achieved in comparable arm’s-length, uncontrolled transactions. It measures the value of functions performed and is ordinarily used in cases involving the purchase and resale of tangible property in which the reseller has not added substantial value to the tangible goods by physically altering the goods before resale.

After a comparability analysis is performed, adjustments must then be identified, analyzed, and quantified based on commercial practices, economic principals, and statistical analysis. Treas. Reg. 1.482-1(e)(2)(ii) states that “if material differences exist [between controlled and uncontrolled transactions] then adjustments must be made to the results of the uncontrolled transaction if the effect of such differences on prices or profits can be ascertained with sufficient accuracy to improve the reliability of the results.”

Since assumptions for adjustments are subjective and based on judgment, they should also be documented. The regulations have examples of adjustments in Treas. Reg. 1.482-1,4, and 8. Some common adjustments include: LIFO and FIFO inventory valuation, amortization of intangibles, pension, working capital, currency risk, and business risk.

If there are material differences and no effective adjustment exists, the reliability of the arm’s-length data must be enhanced by using statistical techniques such as the interquartile range.

Cannabis industry participants face a difficult and uphill battle in light of current local, state, and federal tax regulations. These onerous tax provisions likely will not change significantly in the near future. Further, with tax and climate legislation having been passed in August, the IRS has been given an infusion of $80 billion over 10 years. This will allow the agency to scale up dramatically.

It benefits all cannabis businesses to analyze their tax positions, especially at the federal level. The threat of transfer pricing regulations is rarely considered by cannabis companies or their advisers, but in light of the proliferation of related party transactions in vertically integrated entities, they would be wise to do so. Transfer pricing rules must be considered and acted on properly to avoid even further tax problems for these businesses.

The tax code’s Section 280E has forced cannabis businesses to find creative ways to obtain the most fair and favorable tax treatment. By collaborating in a vertical integration—from production to retail—cannabis entrepreneurs have been able to lessen their taxable income. However, these non-arm’s length relationships are vulnerable to an IRS audit based on Section 482 transfer pricing violations with a potential for significant tax adjustments and penalties. And with a newly expanded budget, the IRS is far more likely to conduct such audits.

This article does not necessarily reflect the opinion of Bloomberg Industry Group, Inc., the publisher of Bloomberg Law and Bloomberg Tax, or its owners.

Abraham Finberg MBA, CPA, a managing partner at AB FinWright, has been a leader in the cannabis sphere since 2009, counseling clients in all phases of business advisory and tax, from start-up through M&A and IPO.

Rachel Wright, MST, CPA, also a managing partner at AB FinWright, specializes in cannabis accounting and taxation for multi-state and multi-national entities, advising clients on everything from internal controls to the bottom-line implications of mixed local, state, federal, and international statutes of taxation.