Earlier this week, one of my Bloomberg Tax colleagues, Alex Clearfield, tweeted out a black screen with a few words:

It’s notable as the jumping-off point for one of the most memorable scenes in Martin Scorsese’s masterpiece, “Goodfellas.”

Often referred to as Henry Hill’s very bad day, the time stamps illustrate Ray Liotta’s Hill as he makes his way through his day in a drug-fueled paranoia which, as it turns out, wasn’t really paranoia after all.

“Goodfellas” made its debut in 1990. Based on a real-life story as told by New York crime reporter Nicholas Pileggi, it chronicles the rise and fall of Mafia associate Henry Hill. Until his arrest, Hill was associated with the Lucchese crime family, one of five Italian American gangs in New York City whose power peaked in the 1970s and 1980s—the others were Bonanno, Colombo, Gambino, and Genovese.

After his arrest, Hill turned FBI informant before entering the Witness Protection Program. 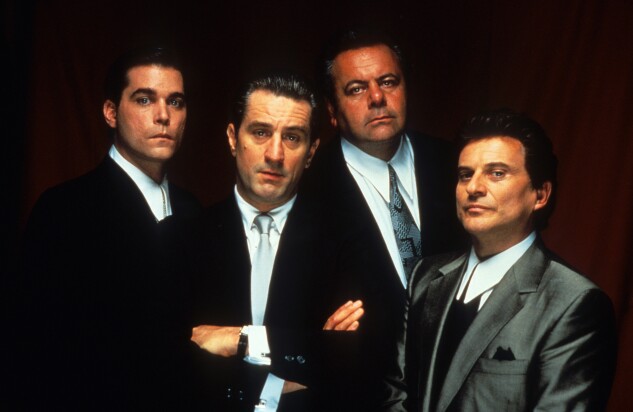 “Goodfellas” is considered one of the greatest films ever made—I think it’s one of Scorsese’s very best. It was nominated for six Academy Awards, including Best Picture. Only Joe Pesci took home a statue, with his work as Tommy DeVito earning him the Best Supporting Actor Oscar.

One of the great things about the movie is how Scorsese paints his characters. There are those who appear irredeemable and others, like Hill, who may be terrible, but you can’t help but hope that they somehow make it out okay.

Unfortunately, the real-life Hill didn’t find redemption. His character in “Goodfellas” mused early on, “As far back as I can remember, I’ve always wanted to be gangster,” and Hill wasn’t content to lead an existence where he thought he would “live the rest of my life like a schnook.” He was eventually accused of more crimes, including drug possession, was thrown out of the Witness Protection Program, and died in 2012.

Scorsese has said that he sees “Goodfellas” as a tragic story. And it is.

But it’s also a reminder that there are rules—and consequences for breaking those rules. It’s something that those of us in the tax and law worlds know well.

In organized crime, the rules were pretty simple. “Goodfellas” bad guy Jimmy Conway boiled it down to, “Never rat on your friends, and always keep your mouth shut.”

In the tax, legal, and accounting worlds, the rules are a little more complex. Fortunately, our goal at Bloomberg Tax is to help you sort it all out. We help you stay informed with great commentary and insightful analysis on federal, state, and international tax issues—and hopefully encourage you to pass along some wisdom of your own.

Hill’s associate, Paul Vario Sr., was found guilty in 1973 on all counts of a three‐count indictment charging conspiracy to evade federal income taxes on money from illegal gambling operations. What was his sentence for those crimes?
Answer at the bottom.

Our experts touched on a wide range of topics, from accounting errors to donor advised funds. For a look at what’s making news, here’s our roundup.

Since the finding of an accounting misstatement or error being material could trigger a restatement, shareholder litigation, and an SEC investigation, the question of who is the reasonable investor becomes critical, write BakerHostetler’s John Carney, Jimmy Fokas, and Bari Nadworny in Materiality, Restatements, and the Reasonable Investor Standard.

Donor Advised Funds, or DAFs, provide unique tax benefits. But the future of DAFs should align with the future of giving, says TIFIN CEO and founder Vinay Nair, and modern fintech promises to democratize personalized giving in Digital Distribution Will Aid Adoption of Tax-Efficient DAFs.

Bored in Retirement? Start a 501(c) Charity for Fun and Profit says Eva Rosenberg, known as the Internet’s TaxMama®, who shares tips on how to start an exempt organization, including clubs or charities for various passions.

Javier Blázquez and Pablo Fernández of Baker McKenzie discuss the first ruling by the Spanish tax authority on remote work during and after Covid-19 travel restrictions, which follows OECD guidance in Spanish Ruling on Remote Working Due to Covid-19 and Permanent Establishment, as they contemplate the implications for future permanent establishment exposure.

Nations of the Middle East and North Africa region are introducing an array of business incentives. They are also raising new corporate, value-added tax, or similar taxes in many cases. In Middle East and North Africa—Tax and Economic Developments Ahmed Al-Esry of EY provides an overview of the economic and tax developments and the opportunities and challenges for business investors, in the latest article in the IN FOCUS series.

The pandemic led Congress to make significant and beneficial changes to the Child Tax Credit and Dependent Care Assistance FSA contribution limits, which have now expired. Congress must now pass legislation reviving those provisions, opines Bill Sweetnam, the technical and legislative director of the Employers Council on Flexible Compensation in Restore Expanded US Tax Credits for Children, Dependent Care.

From a tax perspective, the city of Nashville might have the edge when it comes to fielding a new baseball new in the future—but Tennessee should tread carefully, says tax and technology attorney Andrew Leahey, even as he argues Why Baseball in Tennessee Makes Good Tax Sense.

Financial organizations struggle with data protection, a problem that has only worsened during the Covid pandemic. In How Finance Professionals Can Keep Data Protected All Year Long, Stericycle’s Michael Borromeo shares ways for tax professionals to keep this information safe all year and maintain a strong relationship with clients.

With the heightened gift and estate tax exclusion amount seemingly safe for the next four years, and with interest rates and inflation running hot, should clients and their advisers think differently about the exclusion in 2022 than they did in 2021? In our latest edition of “A Closer Look,” Bernstein Private Wealth Management’s Andrea Kushner and Thomas Pauloski share their thoughts on the gift and estate tax exclusion.

At The Exchange, we welcome responses from our readers, and encourage diversity and civil discussion. We are especially interested in responses that add to the conversation, or introduce a different point of view. If you have a response to one of our published Insights, we’d love to hear from you. Here’s how to submit a response.

Last month, Disney’s Reedy Creek Improvement District made news after Florida’s governor signed legislation to dissolve the special district. But what is a special district—and how, well, special is it? Here’s a look at the history of such districts and what they’re intended to do.

Some or all of the interest paid on student loans can be deducted from your taxes. But despite the proliferation of these types of loans over the years, many taxpayers don’t see a real benefit.

That’s because, unlike with home mortgage interest, the student loan interest deduction has significant limitations and has changed numerous times over the years.

On this week’s episode of Talking Tax, I suggested that Congress needs to rethink how the tax code treats student loans—especially if President Biden forgives a huge swath of them, as he’s discussed doing. I also spoke with Bloomberg producer David Schultz about the struggles of paying for higher education and my family’s decision not to borrow money for college since I’m still paying off my own student loans.

Do you have an original take on current events and issues in tax practice and policy—but you’re not yet a tax professional? Our second annual tax writing competition is the perfect opportunity to show off your work: The competition is intended to highlight the very best of student writing. The deadline is June 15, 2022.

For May, we’d love to see nonprofit pieces, including best practices for nonprofits and Form 990 updates. We’re also looking for smart takes on charitable giving incentives, donor-advised funds, donor privacy issues, and estate and gift planning techniques. And, of course, we’re interested in charity and government-related concepts like unrelated business income taxes (UBIT) and payments in lieu of tax (PILOT).

If you have an interesting, never-published article for publication, we’d love to hear about it. You can contact our Insights team by email (TaxInsights@bloombergindustry.com).

It’s been a busy week in tax news from state capitals to Washington. Here are some of the stories you might have missed from our Bloomberg Tax news team:

Our Spotlight series highlights the careers and lives of tax professionals across the globe. This week’s Spotlight is on Jason King, a certified public accountant and senior manager at DMJ & Co., PLLC, in Durham, N.C.

Are you dreaming about getting a better job? One with higher compensation, better benefits, and greater fulfillment?

Don’t let a poorly written or badly organized resume block your path to the next step in your career. Let us help!

Bloomberg Tax Insights is relaunching its virtual Lunch & Learn series with “How to Firm Up Your Resume as a Tax Professional” on May 19 from Noon to 1 p.m. ET. Tax lawyers and general counsel are also encouraged to participate.

We’re bringing in two experts from Robert Half, a global talent solutions and business consulting firm with more than 300 locations worldwide. They’ll share the latest news about the job market, what tax firms are looking for, and how you can position yourself through your resume to get noticed.

You can join us for this free virtual event, no registration required, at Noon on May 19. Find out more here.

This tax season has been, well, taxing. But now that it’s over, maybe you can use that extra energy for the Bloomberg Tax Insights Virtual 5K. Run, walk, or run/walk 5K (that’s 3.1 miles!) any time between June 6 and June 12 to support a great cause. For the second year in a row, we’re donating the proceeds to World Central Kitchen, which works to fight hunger worldwide and is serving meals to Ukraine families in need. You can sign up here.

Frettens announced that James Hammersley will head up the wills, tax and trusts team in the Christchurch office, according to the law firm.

Freshfields Bruckhaus Deringer has promoted tax specialist María Mera to counsel, according to the law firm. This role is the firm’s most senior legal role below that of partner.

David Lawson has joined Perkins Coie LLP’s trust and estate planning practice as a partner in the Seattle office, according to the law firm.

Lane Morgan has joined Baker McKenzie’s tax practice as a partner in the Dallas office, the law firm said.

Omar El Arjoun has joined Stephenson Harwood LLP as a partner in its tax practice in Paris, the law firm announced.