Attendees arrive for the Baidu Developers Conference in Beijing on July 3. OECD provisions aimed at U.S. digital companies may have less impact on China's Internet giants such as Baidu.
Photographer: Gilles Sabrie/Bloomberg

The Unified Approach released on Oct. 9, 2019, by the OECD fundamentally changes international tax rules on the grounds that the current rules no longer ensure fairness. Glenn DeSouza of Dentons China analyzes the proposal from the perspective of China.

The Unified Approach released on Oct. 9, 2019, by the OECD fundamentally changes international tax rules on the grounds that “the current rules dating back to the 1920s are no longer sufficient to ensure a fair allocation of taxation rights.” Revolutions for “fairness” are not usually launched by institutions of the bourgeoisie, and the Paris-based OECD has been very much part of a bourgeoisie as the guardian of the status quo, a so-called “rich country’s club” and a staunch defender of time-honored principles like the arm’s-length standard.

Like all revolutions, this will not be tidy, but the objectives of the Unified Approach are clear: tilt the scales in favor of the “market jurisdictions” and against the home country of the MNC. One point should be made very clear, the Unified Approach should not be confused as some type of BEPS extension. There is a fundamental difference. BEPS had the salutary objective of moving profits from tax havens to countries where actual activities took place. By contrast, the Unified Approach has the far more politically-charged objective of shifting profits from the home country of the MNC to the markets where they sell. Although, the Europeans are driving this program, it is the United States of America and the People’s Republic of China that are being impacted most seriously.

Our Take on the Greatest Danger

To achieve fairness, the OECD proposes a new taxation right that would allow countries like China in effect to storm the castle by directly taxing the global profit of a MNC. Our take is that this new taxing right (code named Amount A) is by far the most dangerous element in the Unified Approach it is disconnected from the arm’s-length principle (ALP) and will lead to double taxation and exacerbate controversy.

Will There Be Consensus?

The OECD asserts that the Unified Approach has been developed to “attract support from all members of the Inclusive Framework.” This is wishful thinking, especially since the members, which number 130-plus, have different agendas. Giving foreigners a new right to tax American companies is not likely to be welcomed in Washington. Consider President Trumps response to the French 3% digital tax: “This is foolishness. They shouldn’t have done this. They’re used to taking advantage of the United States, but not with me as president. If anybody taxes them, it should be their home country, the USA. We will tax French wine. I’ve always said American wine is better than French wine!”

To Whom Does it Apply?

While the Unified Approach takes dead aim at American digital giants, the consequences are more far reaching since it would also apply to “consumer companies” and would “allocate more taxing rights to the jurisdiction of the customer—hereafter, the “market jurisdictions.” The OECD states that “MNCs in digital-oriented and intangible-intensive sectors would be significantly impacted.” As of now the prime targets are:

1. Digital and consumer business (including distributors and probably retailers),

4. Highly profitable at the global level with profits in excess of routine returns

There is a debate on just how broad is the OECD definition of “consumer businesses” and which type of industries would it encompass. Luxury goods would seem to definitely be in the inclusions but how about pharmaceuticals or semiconductors? The OECD draft is vague and only specifically excludes “extractive industries and commodities”; so it is likely that the coverage will end up being broad.

France looks like the big winner since the Unified Approach ratifies the philosophy behind her controversial digital tax on remote sales. But this could be a Pyrrhic victory since French luxury goods companies will now be subjected to new taxing rights in China their largest market. Meanwhile, the U.S. as the home country of the world’s largest MNCs and digital companies is a loser. China is the biggest winner. It has very few global MNCs and at same time it has a huge market, so China gains new taxation rights but faces little blowback.

Interested parties were invited to send their comments no later than Tues., Nov. 12, 2019, and a public consultation will be held on Nov. 21 and 22, 2019, in Paris. OECD Secretary General Angel Gurria issued a warning to the 134 countries that “If we do not reach an agreement in 2020, it will increase the risk that countries act unilaterally.” Pascal Saint-Amans, who is with OECD stated that “If we are able to ensure that there is a real negotiation, a political agreement could be reached in June 2020,” and he added that “the dynamic is rather positive, even if it is extremely complicated.” Once consensus is reached domestic laws and treaties will be revised and a new international tax and transfer pricing structure formalized.

A New Definition of Nexus

Currently, in a jurisdiction a non-resident company is taxable on its business profits only if it has a permanent establishment there. The new nexus rule “would be applicable in all cases where a business has a sustained and significant involvement in the economy of a market jurisdiction.” The OECD suggests that the simplest way of operating the new rule would be to define a revenue threshold in the market (the amount of which could be adapted to the size of the market) as the primary indicator of a sustained and significant involvement in that jurisdiction. The revenue threshold nexus “would also apply to groups that sell in a market through a third-party distributor.” 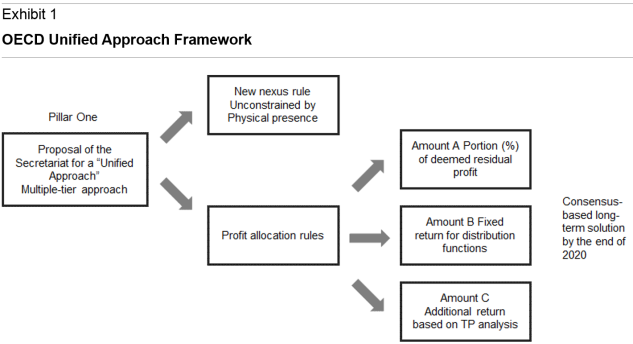 Presented below is a simplified decision tree on how the OECD Unified Approach would work. Typically, a MNC would be subject to Amount A (if no nexus but significant sales) or Amounts B and C if it has a subsidiary. However, as will be discussed in some situations all three Amounts may apply. 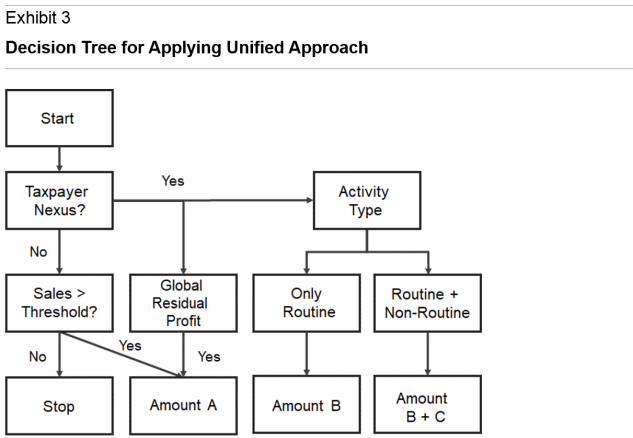 The steps to calculate Amount A: Global Profit Split are listed below:

Step 1. Identify the MNC group’s worldwide profit from the consolidated financial statement. This may be measured on a business line basis (z%).

Step 3. A portion of the residual profit (w%) would then be attributed to market jurisdictions, with the remaining portion (1 - w% = v%) allocated among other value-creating factors.

OECD only provides one example to illustrate the three-tier model. For ease of exposition we have simplified the facts, which are as follows:

1. Group X is highly profitable and earns non-routine profits. Its parent company is P Co is based in Country 1.

2. Q Co is resident in Country 2 and is responsible for marketing and distribution in Country 2.

The OECD conclusion is that all three Amounts A, B, and C could be applicable under this set of facts.

As the recent contretemps with the NBA reminded everyone, the China market is huge and indispensable. The Beijing-based Fortune Character Group (and Bain Consulting) estimate an astonishing 46% of global luxury goods sales are to citizens of China. More examples come from the People’s Daily that warns: “Many major US corporations, including carmakers such as General Motors and chipmaker Skyworks Solutions, sell more products in the Chinese market than in their home market. Skyworks, for example, sold 85% of its total volume in the Chinese market. Other US companies, including plane-maker Boeing and Apple, are also heavily dependent on the Chinese market.”

How China Gains From the Unified Approach

We see two great concessions that will benefit the China State Tax Administration (STA) in its hunt for more taxes from MNCs that enjoy its “unique market premium.” First, China will have a green light to go after China-source revenues booked remotely, such as in a Singapore Principal—that is Amount A. Second, since many MNCs invest massively in establishing brand in China, STA can not only request routine returns (Amount B) but also additional returns (Amount C).

China has made some unilateral moves that mirror the Unified Approach.

First with regard to Amount B, a routine profit for distributors this is already set out in the Chinese regulations at Article 28 of Bulletin 6.

Second, with regard to Amount C in the United Transfer Pricing Manual for Developing Countries, China STA stated that a distributor or retailer deserves an extra remuneration for activities beyond the baseline. The STA states “Typical third-party retailers do not engage in brand development and strategic marketing events. By contrast subsidiaries of MNCs particularly in the luxury goods, pharmaceutical and automotive industries are heavily engaged in creation of local marketing intellectual property as evidenced by heavy spending on SG&A in excess of 20% of revenues.”

Third, with regard to Amount A, this situation comes up in context of MNCs that sell to Chinese original equipment manufacturers (OEMs) and book the revenue offshore. In audits, the China STA has asserted that the offshore sales should be included as part of the transfer pricing base.

The provisions in the OECD Unified Approach aimed at targeting American digital giants like Facebook and Google are less applicable in China, since Facebook, Google, and Twitter, and so on are blocked in China.

China has also has its own internet giants; namely the so-called BAT, comprising Baidu, Alibaba, and Tencent but once again their overseas exposure may be limited since they are still mostly generating revenues in China.

The solutions suggested in the so-called OECD Unified Approach will fundamentally alter international tax rules and it is suggested that taxpayers consider the following actions:

1. Lobby OECD: Taxpayers should participate to object especially to the ambiguous and over-reaching implications of Group A profit computations.

2. Lobby Own Government: Taxpayers should also seek to ensure that their own countries recognize that they will lose taxing rights and revenues if the Unified Approach goes through.

3. Revise business models: Given that selling remotely or through off-shore tax havens will now be taxed, it could be advisable to set up a subsidiary in-country and onshore the revenues.

4. Revise the transfer pricing model: Traditionally, MNCs have based their transfer pricing on the fundamental principle that the Chinese entity is being compensated on an arm’s-length basis. Now there will need to be a rethink to revise transfer pricing policies and documentation to minimize the exposure to Group A and Group C profit allocations.

The Unified Approach is a European-inspired initiative that is going to rewrite time-honored tax principles to favor “market jurisdictions.” It will have the consequence of giving not just France the right to tax GAFA companies, but even more seriously giving China new taxing rights on American multinationals. Hardest hit could be ultra-profitable companies in such sectors as Internet, semiconductors, pharmaceuticals, and luxury goods. Implementing the Unified Approach will in lead in many cases to increase the overall group-wide tax burden and almost surely to double-taxation, at least in the short-term.

Glenn DeSouza is a national transfer pricing leader at Dentons China based in the firm’s Shanghai office. Glenn may be reached at Glenn.Desouza@dentons.cn.