U.S. Treasury Secretary Janet Yellen at a G7 meeting in London on June 5. The U.S. has proposed including just 100 of the world's largest and most profitable companies in a global minimum tax.
Photographer: Rob Pinney/POOL/AFP via Getty Images

This spring the U.S. government proposed scrapping the OECD requirement that only automated digital services and consumer-facing businesses would be included in Pillar One, the OECD’s proposal for taxing the digital economy. In Part 1 of a two-part article Lorraine Eden of Texas A&M University illustrates how the U.S. proposal would create an incentive to regularly restructure multinational enterprises to fall outside of the “Top 100.”

On April 8, 2021, the U.S. government proposed that the OECD/IF scrap the requirement that only automated digital services (ADS) and consumer-facing business (CFB) industries and activities would be in-scope for Pillar One. Instead, Amount A in Pillar One would apply only to the top 100 largest and most profitable MNEs on a global basis. As a result, the number of in-scope MNEs would drop from about 2,300 to 100 firms.

(See “Presentation by the United States to the Steering Group of the Inclusive Framework Meeting,” Apr. 8, 2021; Isabel Gottlieb and Laura Davison, U.S. Floats Tax Compromise Targeting 100 International Firms, Bloomberg Tax (Apr. 8, 2021); Daniel Bunn, Treasury’s Latest Pillar 1 Proposal: A Strategy to Split the Riches or Give Away the Store? (Tax Foundation, April 14, 2021) ; and Ashley Greenbank, Gregory Price, and Rhiannon Kinghall Were, Re-born in the USA: Will the OECD tax plans now be made in America? Macfarlanes (April 16, 2021).

With this huge, proposed change in the scope and reach of Amount A, how would that affect the conclusions in my earlier article U.S. Estimates about the corporate income tax (CIT) base impacts and thus potential winners and losers from Amount A? First, in order to assess how Amount A would apply to the 100 largest, most profitable MNEs, I need to identify them at least in terms of their industries and home countries. Second, based on this information, I can use U.S. Bureau of Economic Analysis data on majority-owned foreign affiliates (MOFAs) and majority-owned U.S. affiliates (MOUSAs) that more closely matches these firms, similar to the process I used for ADS and four CFB industries in U.S. Estimates, to guesstimate the impacts of the U.S. proposal to change the scope of Amount A. Below I address the first question: Who’s in the top 100?

An obvious issue is where to find data on THE largest, most profitable global MNEs. Some well-known lists omit MNEs in particular industries or rank the firms based on their offshore activities. For example, the list of the world’s top 100 MNEs in United Nations Conference on Trade and Development’s (UNCTAD’s) World Investment Report excludes MNEs in financial industries and ranks the top 100 MNEs by value of their foreign assets. I therefore decided to use the Fortune Global 500 list for 2020, which ranks on the basis of four factors (sales, profit, assets, and market value).

My results disaggregated by industry are shown in Table 1 and disaggregated by home country in Table 2. Both tables are organized to match the industry and country groupings of BEA data on MOFAs and MOUSAs. The tables are in three sections: the top 100 MNEs; the top 200 MNEs, and the top 108 MNEs excluding finance and insurance (FIN&INS) and mining. 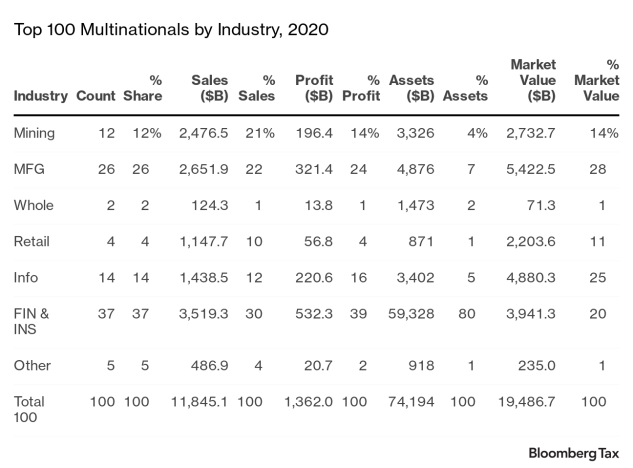 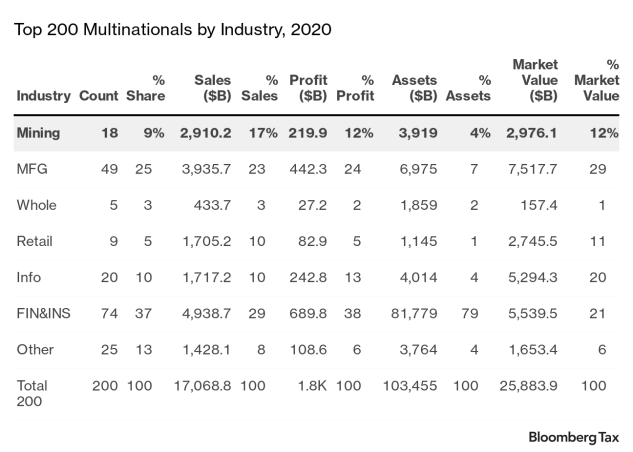 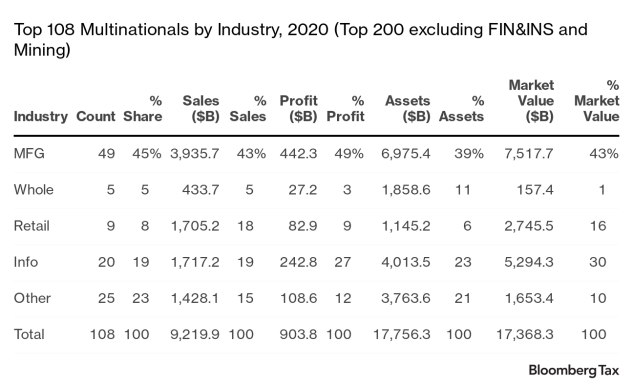 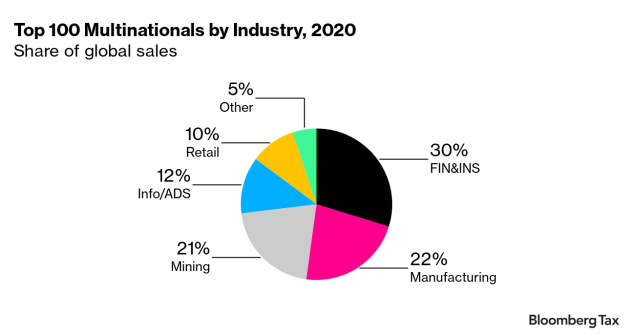 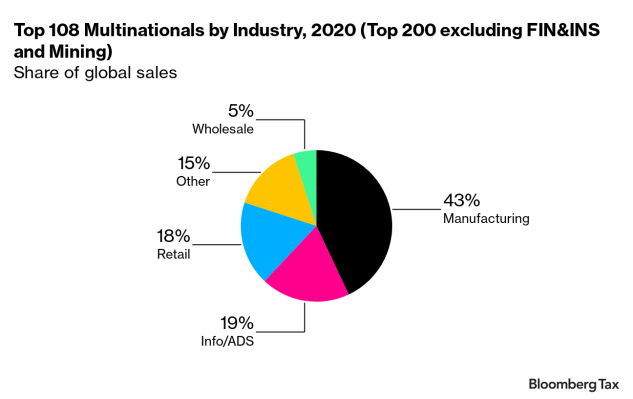 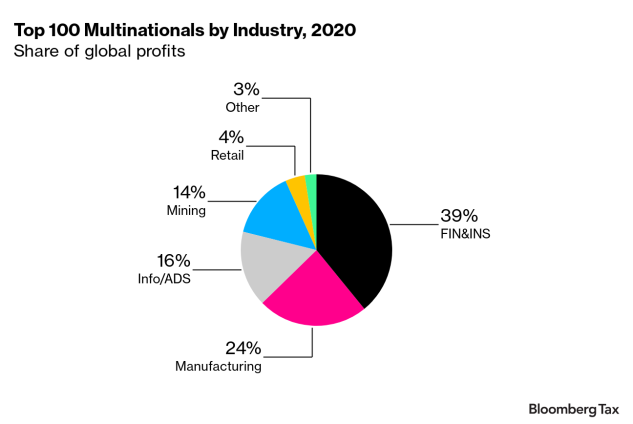 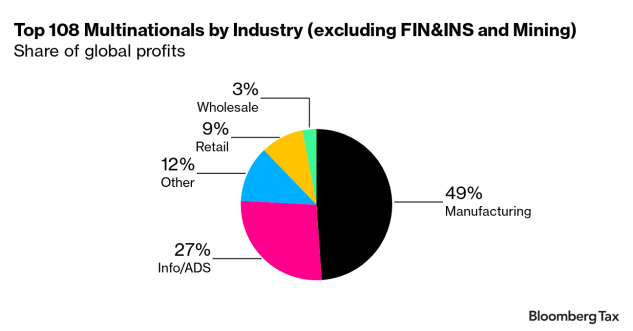 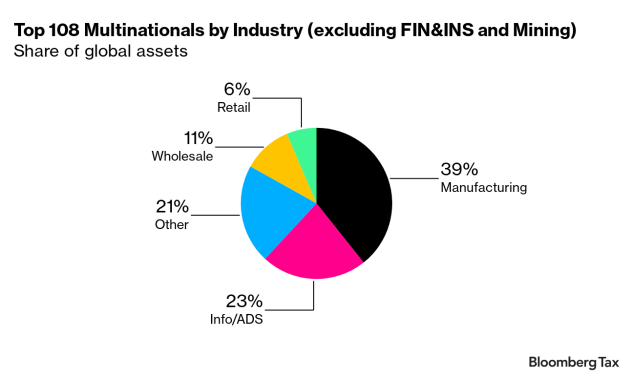 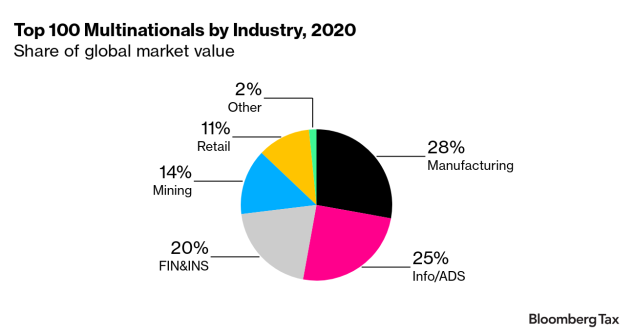 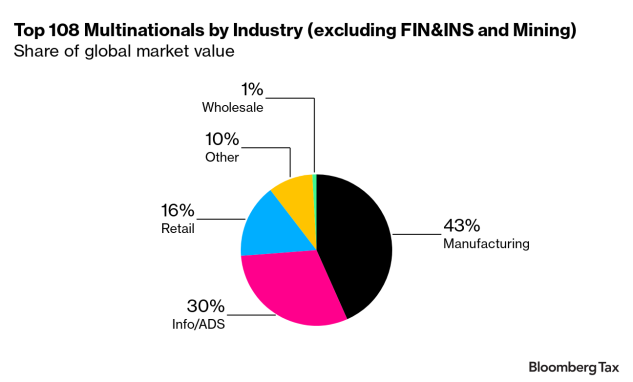 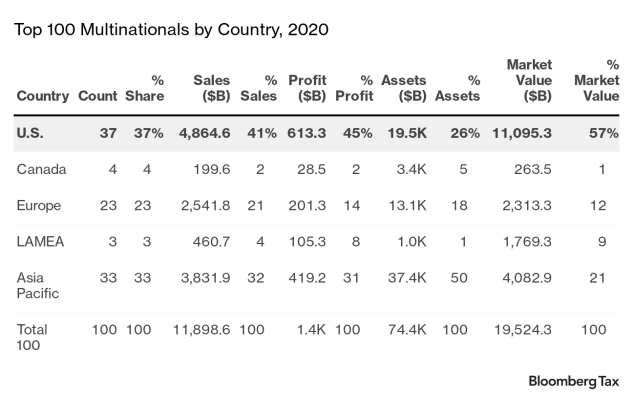 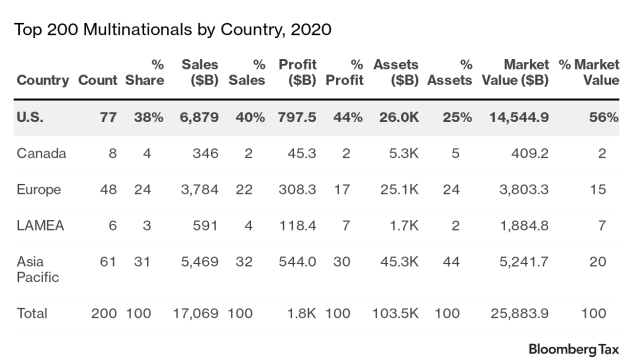 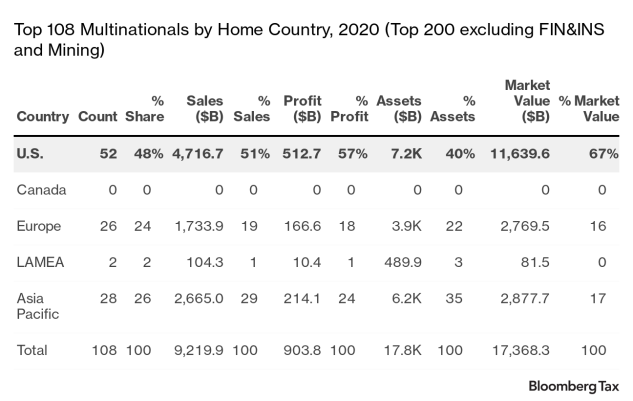 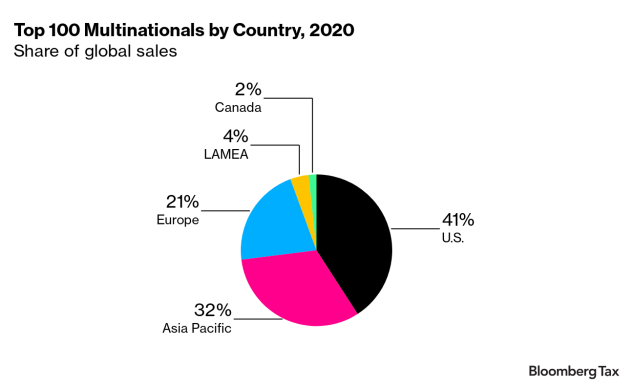 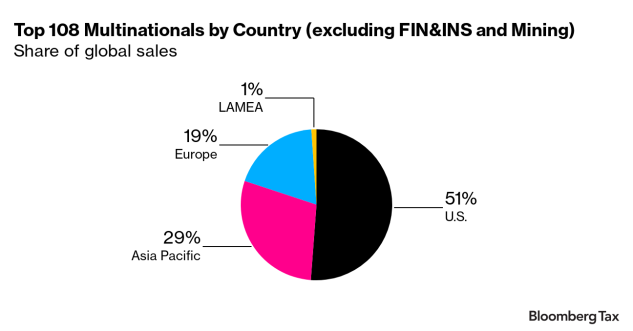 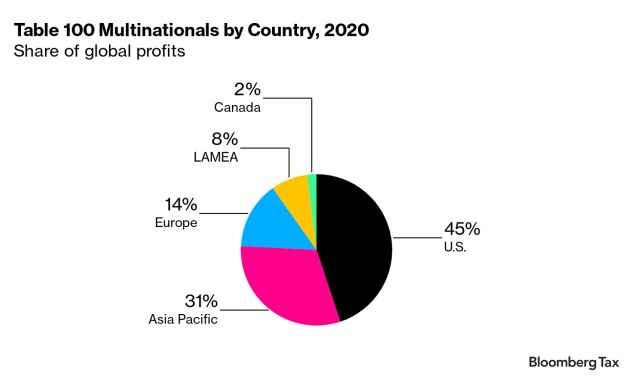 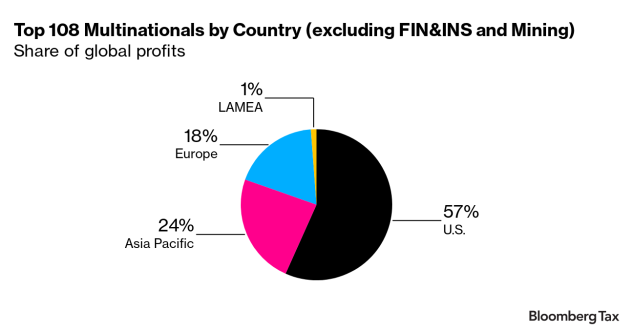 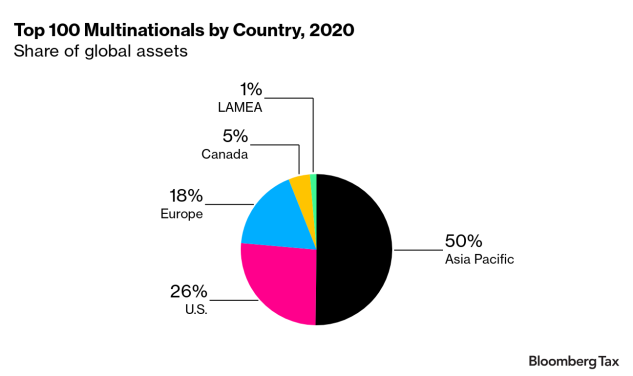 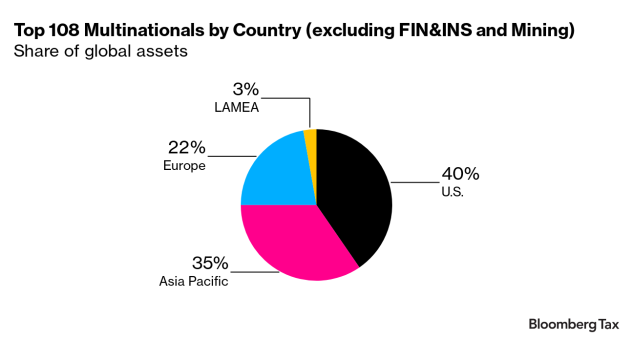 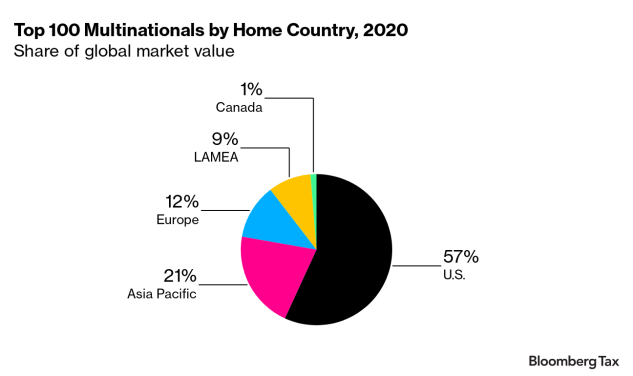 What is immediately evident in Table 1 is that, by count, finance and insurance (FIN&INS) is the largest industry group (37%) in the top 100 and 200 MNEs. Both FIN&INS and mining (which included oil and gas and other natural resource industries) were excluded from the Pillar One Blueprint (see pp. 49-56). Since together they represent nearly 50% of the top 100 and 200 MNEs, the bottom section of Tables 1 and 2 shows the impact of removing these two industries. Just over 100 MNEs remain, sufficient numbers for the U.S. proposal. The other large industry group, by count, is manufacturing (MFG), whose share nearly doubles from 26% of the top 100 MNEs to 45% of the top 108 MNEs once FIN&INS and mining are excluded.

Looking at the lists from a home country perspective in Table 2, U.S. MNEs represent 37% of the top 100 and slightly more (39%) of the top 200 MNEs. With FIN&INS and mining excluded, the U.S. share grows to nearly half (48%) of the group. The second-largest home jurisdiction is Asia Pacific with one-third of the top 100 and 31% of the top 200 MNEs; its share drops a bit (26%) when FIN&INS and mining are excluded. Europe’s share is quite stable at about 24% in all three parts of Table 2.

It is also useful to focus on global sales and profit data for each of the industries and countries. These variables would be key in selecting the top 100 MNEs under the U.S. tax-the-top-100 proposal and are also possible predictors of CIT base changes. Particularly noteworthy in Table 1 are the high shares of FIN&INS in the global sales (nearly 30%) and profit (nearly 40%) of the top 100 and 200 MNEs. Sheer size alone suggests this industry should not be excluded (why exempt the most profitable MNEs?) from the U.S. proposal. On the other hand, its significantly larger share of global profit than global sales may suggest FIN&INS could be designated as “tax base relieving” (i.e., too profitable) and thus lose CIT base relative to other industries under Amount A. Note also that if FIN&INS and Mining are removed, MFG’s share of global sales jumps from 22% to 42% and its share of global profit from 24% to 49%; thus, MFG becomes relatively more profitable and could lose CIT base relative to other industries under Amount A if FIN&INS and Mining are excluded.

Lorraine Eden is Professor Emerita of Management and Research Professor of Law at Texas A&M University (leden@tamu.edu). She thanks Oliver Treidler, Ognian Stoichkov, Niraja Srinivasan, Tatiana Amba, Daniel Bunn, and Philippe Paumier for helpful comments on earlier versions of this paper. The views in this article are the author’s and do not reflect those of any other person or institution.