Vodafone International Holdings B.V. won a lengthy dispute with the Indian government over a retroactive tax provision when the Permanent Court of Arbitration in The Hague, Netherlands, ruled on Sept. 25 that an amendment to domestic Indian tax laws was in violation of an agreement between India and the Netherlands. Ravi Sawana of Lakshmikumaran & Sridharan analyzes the decision and explains its impact going forward.

Vodafone’s journey in India has been an epitome of litigation with the Indian Government, be it imposition of retrospective taxation or dispute on revenue-sharing model et cetera.

In respect of the international arbitration proceedings initiated by Vodafone International Holdings B.V. (VIH or Vodafone) against the Indian Government, recently, the Permanent Court of Arbitration (PCA) held that the imposition of taxation through a retrospective amendment of domestic Indian tax laws, is in violation of “fair and equitable treatment” provided under the Agreement between the Republic of India (India) and the Kingdom of Netherlands (Netherlands) for Promotion and Protection of Investments (India-Netherland BIT). Though this award does not mark the end of dispute as the Indian Government still has an option to challenge it before the High Court of Singapore, it may have significant impact on the pending arbitration proceedings.

In 2007, VIH entered into an agreement with Hutchison Telecommunications International Limited (HTIL), a foreign company, to acquire its shareholding in a Cayman Island Company. This acquisition enabled Vodafone to indirectly control an Indian telecom company, Hutchison Essar Limited. Soon after, the Indian income tax authorities passed an order against VIH demanding payment of $2.2 billion for failure to withhold tax claiming that the subject transfer had the effect of transferring the Indian assets and therefore, such transfer was taxable in India.

The matter went to the Supreme Court of India which held that the transaction between HTIL and VIH did not give rise to tax liability in India and therefore, VIH was not liable to withhold tax.

The victory did not last long, and in the Annual Finance Act of 2012, the Indian Government retrospectively amended the tax laws in India which had the effect of nullifying the basis of decision of Supreme Court and, renewing the tax demand on Vodafone. VIH challenged this amendment before the PCA under the BIT.

The full text of the award is not in public domain. But what is known is that the imposition of a tax liability based on a retrospective amendment has been held to be in breach of fair and equitable treatment laid down in Article 4(1) of the India-Netherland BIT.

The finding in Vodafone arbitral award may also have an impact on the pending arbitration proceedings initiated by Cairn group and other similarly placed companies.

This article seeks to analyse the impact of Vodafone’s arbitral award on similarly pending dispute to see whether it would have precedential value.

In 2014, pursuant to a survey action carried out at the premises of Cairn India, the Indian income-tax authorities took a view that the transfer of shareholding in Cairn Jersey had the effect of transferring the business in India and therefore, in view of the retrospective amended income-tax laws, Cairn UK was liable to pay capital gain tax in India. This action was challenged by Cairn UK and is currently sub-judice before the High Court of Delhi in India. While the proceedings were ongoing in India, Cairn group also initiated arbitration proceedings against the Indian Government under Article 9 of the Agreement between the Government of the Republic of India and the Government of Great Britain and Northern Ireland for Promotion and Protection of Investments (India-UK BIT). Presently, the proceedings are pending before PCA.

The “Doctrine of Stare Decisis,” as prevalent in common law legal systems, means “to abide by the precedents and not to disturb settled points.” There is no similar doctrine either in civil law systems or even under International Law. The International Center for Settlement of Investment Disputes (ICSID) and the UN Commission on International Trade Law (UNCITRAL) provides that the award shall be final and binding upon the parties.

In absence of any prevalent rule of binding precedent of earlier awards, the international arbitration tribunals, functioning under ICSID and UNCITRAL, do consider previous awards to have a persuasive value. This persuasive effect is subject to certain factors which are:

A decision can act as a precedent, even for persuasive value, if the facts involved in two cases are identical or similar. An arbitral award would lose its precedence value on incomparability of facts. The awards of investor state arbitration tribunals must cover a wide variety of facts and commercial circumstances that continue to occur in international business and in relation to foreign investments.

Whether the Vodafone arbitral award would have any persuasive value in arbitration proceedings of Cairn UK would depend upon the factual matrix involved in both the cases.

Both cases involved indirect transfer of Indian assets prior to retrospective amendment in 2012 coming into effect. However, the material dissimilarity in facts is brought as under: 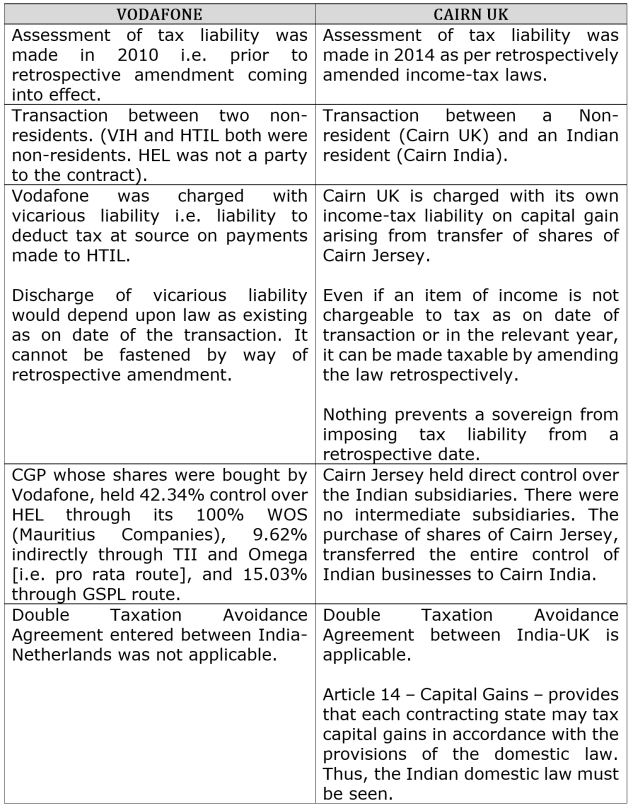 Similarity in applicable legal principles including relevant investment treaties, is also important when considering the applicability of a decision or an award. If the law in two cases differs significantly in substance, then it would be incorrect in relying upon the decision in an earlier case. In Investor-State arbitrations, the investment treaties would be the governing law under which the dispute would be decided. The UNCITRAL rules state that the arbitral tribunal shall apply the law designated by the parties as applicable to the substance of the dispute. Failing such designation by the parties, the arbitral tribunal shall apply the law determined by the conflict of laws rules which it considers applicable.

In Vodafone’s case, in the absence of full text of the arbitration award, it is not clear on what basis, the arbitral award was passed in its favor. In case of Cairn UK, if the Vodafone decision is to have a persuasive value, then the PCA shall also examine the similarity in India-Netherland BIT vis-à-vis India-UK BIT, to see whether the substantial terms of treaties are similar

BITs provide that the investment of an investor of a Contracting State shall be provided fair and equitable treatment in the territory of other contracting state. “The original purpose and intent behind FET clauses was to protect against the many types of situations of how unfairness may manifest itself, such as, for example, an arbitrary cancellation of licences, harassment of an investor through unjustified fines and penalties or creating other hurdles with a view to disrupting a business. FET protects investors against serious instances of arbitrary, discriminatory or abusive conduct by host States.” (See, Fair and Equitable Treatment – UNCTAD Series on Issues in International Investment Agreement II)

In 2007, the transaction between Vodafone and HTIL did not give rise to any tax liability in India and therefore, Vodafone was not liable to deduct income-tax at source before making payment to HTIL. It also could not have anticipated the forthcoming retrospective legislation of 2012. However, by retrospectively amending the law, vicarious liability was sought to be attached on Vodafone. It is settled law that provisions relating to withholding tax provisions under the Indian income-tax context are to be seen as on date of transaction. These provisions cannot be given effect from a retrospective date. Therefore, the imposition of a vicarious liability from a retrospective date appears to be unfair and unjustified. Though the author does not have access to the grounds raised before the PCA and the detailed decision of the PCA, looking at the past facts, the author believes that Vodafone would have challenged the imposition of vicarious liability by way of a retrospective amendment.

In 2017, Vodafone Group Plc., a United Kingdom entity and the parent company of VIH, initiated arbitration against India under the India-UK BIT, challenging the retrospective amendment by the Indian Government, in respect of the same transaction between VIH and HTIL.

Will Indian the Government Accept the Vodafone Arbitral Award?

Imposition and levy of taxation is a sovereign matter. If transactions involving routing of funds through abuse of corporate structures leads to erosion of tax base of any country where the economic values are created, then the sovereign may well be within its right to impose and recover tax. However, imposition of such tax retrospectively, especially after the highest court having held to the contrary, may create uncertainties and deter investments. While considering this aspect under the Fair and Equitable Standard of BIT, the arbitral tribunal should balance the interest of an investor as well as the host country.

While Vodafone may have won the battle, but the fate of Cairn is yet to be decided. The arbitral award of Vodafone may not be a binding precedent for Cairn, but it can have persuasive value. It must not be taken as a foregone conclusion that Cairn arbitration would go the Vodafone way.

It is also worthwhile to note that if the Indian Government accepts this award, then this move would be welcomed by the business incorporations.

Ravi Sawana is with Lakshmikumaran & Sridharan in Mumbai.