A $9 billion plan to dole out cash to Californians as relief from surging gas prices has one big thing going for it: It’s expensive.

Of the 25 states flush with revenue, California is the only one with an arcane 1970s spending limit that dictates what lawmakers can do with the extra money. That law is the subtext of every major budget discussion as it prioritizes some uses, like proposals from Assembly Democrats and Gov. Gavin Newsom (D) to give out $400 payments for gas tax relief.

At the same time, it’s a roadblock for other uses, like saving for a rainy day or expanding social programs. And any tax increases would make the problem worse.

Lawmakers have a few months to find enough acceptable ways to spend the money. They can reduce revenue through tax cuts, credits, or rebates. They can spend on emergencies, infrastructure, or debt. If they don’t cut revenue or spend enough, they’ll be forced to split the excess evenly between education and tax relief.

“It is literally the values of a small sliver of the electorate from the late ‘70s governing today,” said Kristina Bas Hamilton, a lobbyist with clients focused on economic justice and care for the aging and disabled. “It’s like a straitjacket.”

Voters approved the limit in 1979 during a wave of anti-tax sentiment. The limit’s chief proponent, Paul Gann, was a conservative activist who also co-authored the better-known Proposition 13, a statewide cap on property tax passed in 1978, alongside anti-tax crusader Howard Jarvis.

The Gann limit, also called the state appropriations limit, sounds simple. Its purpose is to keep per-person state spending below 1978 levels, with adjustments for per-capita income and population growth. If revenue exceeds the spending limit for two consecutive years, restrictions kick in on how the extra money can be used. 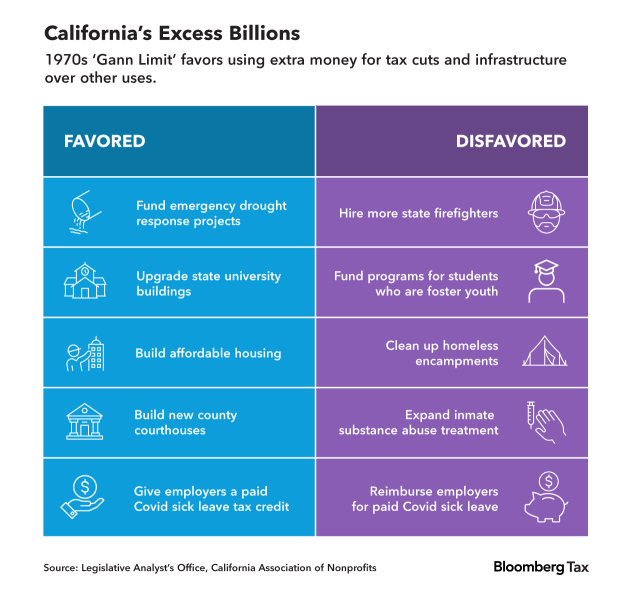 The limit was triggered in 1986, and not again until now. The state’s surprisingly high tax revenue is to blame.

Because California’s progressive income tax system generates more revenue when the incomes of a relatively small number of high earners rise, revenue growth is outstripping per-capita income. California’s revenue per capita has been creeping toward the limit over the past 10 years, and Newsom first warned in January 2021 that the state could be over the limit by about $100 million.

An expected pandemic revenue crater turned into a boom instead. As of now, the state has $2.6 billion in revenue over the limit from last year. A final two-year amount will be set in the next few months for the current and previous fiscal years combined, but with revenues in the first eight months of the current fiscal year already $17.5 billion above projections, on top of an already-projected surplus of $45.7 billion, the amount of money subject to Gann limit restrictions is large.

If lawmakers allow tax revenue and spending to follow their current trajectories, when the final two-year calculation is set they will be required to split excess revenue evenly between education and tax rebates.

Alternatively, lawmakers can make changes before they reach the two-year mark to reduce the amount of money subject to the 50/50 split between tax relief and schools. They have more flexibility with this preemptive approach, although their hands are still somewhat tied. They can use the excess cash only to reduce tax proceeds or increase spending for specified purposes: debt, federal and court mandates, infrastructure, emergencies, or local government.

Newsom and lawmakers have been acting preemptively. For example, in 2021 they spent almost $9 billion sending up to $1,200 to more than 12 million low-income Californians, invoking the limit’s emergency provisions due to the pandemic. In February, they reduced tax proceeds by $5.5 billion when they restored corporate tax deductions for net operating losses and lifted the $5 million cap on annual business tax credit claims.

Through the Gann Filter

Now, as they are writing the budget for the next fiscal year, which starts July 1, and considering adjustments to the current year, every item in the budget is filtered through the Gann limit lens. This year, each $1 increase in revenue triggers $1 in actions to comply with the limit, according to the Legislative Analyst’s Office.

The limit “definitely pushes us to look at some things more closely, like infrastructure or tax relief,” Assembly Budget Committee Chair Phil Ting (D) said. He noted it’s only one of the constraints on the budget-writing process.

“To be in a position where we can’t use those funds to address issues like our housing crisis and our homelessness crisis doesn’t make any sense,” said Sen. Nancy Skinner (D), chair of the Senate Budget Committee.

All the while, the anti-tax Howard Jarvis Taxpayers Association is watching how lawmakers comply with the limit, President Jon Coupal said. The group may disagree with lawmakers’ interpretations of qualified spending or what a proper tax rebate looks like, and is prepared to challenge their actions in court.

And the limit will remain a constraint for the forseeable future, based on projections from the legislative analyst and Department of Finance that tax revenue from the wealthy, especially from capital gains, will continue to outpace per-capita income.

Lawmakers are in the early stages of crafting changes to the limit, which would require voter approval and take a few years to make a difference. Without changes to the law, only an economic downturn would deactivate it.

“We don’t want to go into a recession just to get under the Gann limit,” said Scott Graves, director of research at the progressive California Budget and Policy Center.

Newsom’s $213 billion general fund budget proposal for next year includes $12.5 billion in Gann-allowable discretionary spending. Most of the spending is for infrastructure, from transportation to construction of schools, courthouses, and drought resilience projects.

Interest groups and lawmakers have plenty of other suggestions that emphasize how they can help stay under the limit. A few of the ideas:

While Assembly Democrats and Newsom fine-tune their billion-dollar gas tax relief plans, Senate and Assembly leaders are working on a similar proposal that would exclude high-income earners from such payments. Republicans are pushing for a pause to the 51-cent-per-gallon excise tax on gas completely for six months.

“Because of the Gann limit we are in a historic position to give money back to California taxpayers,” Assemblywoman Cottie Petrie-Norris (D) said earlier this month while announcing the $400 tax rebate proposal.