The Internal Revenue Service headquarters in Washington, D.C. The Biden administration's plan would provide funding for the IRS to add about 87,000 employees by 2031, roughly doubling the agency’s workforce.
Photographer: Samuel Corum/Bloomberg

The U.S. Treasury Department estimated that wealthy taxpayers as a group are hiding billions of dollars of income, a conclusion that aims to bolster the Biden administration’s call for Congress to approve expanded IRS funding and broad new financial-transaction reporting requirements.

The department detailed in a report Thursday the administration’s proposed measures to raise $700 billion in additional revenue over a decade through Internal Revenue Service enforcement. The release follows criticism from Republican lawmakers and tax analysts that the estimate is unrealistically high.

The enforcement plan is a central component of President ’s quest to fund his roughly $4 trillion in long-term economic proposals. The administration called for banks and cryptocurrency exchanges to report transactions to the Internal Revenue Service, which would also get new auditors and an upgraded information-technology system.

“The IRS will be able to deploy this new information to better target enforcement activities, increasing scrutiny of wealthy evaders and decreasing the likelihood that fully compliant taxpayers will be subject to costly audits,” the Treasury said of the proposed reporting requirements.

Income earned from small businesses, rental properties and other so-called pass-through entities is increasingly becoming a target for the Biden team as it looks for ways to close the tax gap -- the difference between taxes owed and those paid, which is projected to reach $7 trillion in the next decade. 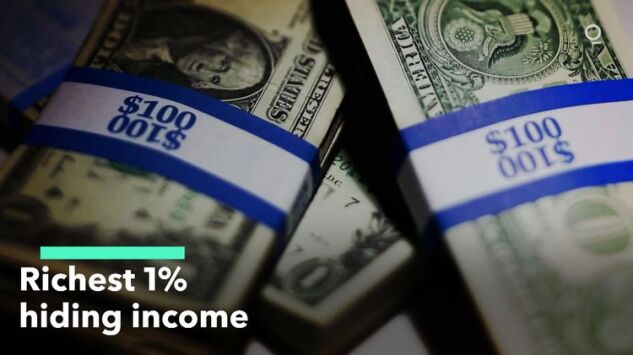 WATCH: A new study finds that the richest 1% of Americans hide income from the IRS.
Source: Quicktake

While both Democrats and Republicans have backed stronger enforcement as a means of paying for long-term economic development programs, challenges have emerged. GOP lawmakers have warned against government overreach -- especially with regard to account-flow reporting -- and congressional rules could limit the ability of Democrats to apply the Treasury’s estimate to funding for Biden’s spending plans.

The Treasury’s plan includes requiring banks and financial institutions to report account flows -- information that the IRS currently doesn’t have. The idea is to make pass-through income more like wages, which employers must report to the agency.

Taxpayers report only 45% of their income when the IRS doesn’t have visibility into their earnings, the Treasury estimated. That compares with a 99% compliance rate for wages where employers are required to report to the IRS, the Treasury said.

“Sophisticated taxpayers and those who advise them are well-positioned to shield unpaid taxes,” the Treasury said. Examples include pass-through income, which “can be challenging to attribute to its ultimate owner,” and capital income flowing to offshore accounts, the Treasury said.

The gap between taxes owed and those paid for partnership, S-corporation and proprietorship income is “estimated at around $200 billion annually with the net misreporting percentage for certain income categories exceeding 50%,” the Treasury said.

Incomes from partnerships are a particular challenge, the Treasury said. Those have surged as a share of total income to more than 35% from less than 5% in 1990. More than 4.2 million partnership returns were filed in 2018 -- more than double the number of corporate returns -- but the IRS audited only 140 of them, the Treasury said.

Also important has been the increasing instance of high-income Americans who simply don’t file a tax return, the Treasury said. There were nearly 900,000 high-income nonfilers between 2014 and 2016, the Treasury found, and 44% of those cases were never investigated. Some 300 of the “most egregious evaders cost the federal government $10 billion in unpaid tax liabilities,” the report said.

New account-reporting requirements are designed to help address the challenge.

“The annual return would report gross inflows and outflows on all business and personal accounts from financial institutions, including bank, loan and investment accounts,” the report said. “The reporting regime would also cover foreign financial institutions and crypto asset exchanges and custodians.”

Cryptocurrency transfers worth $10,000 or more would be reported to the IRS.

The Treasury said the new reporting regime would go into effect in 2023 to give financial institutions time to prepare for the new requirements. The Treasury estimates that the increased visibility into taxpayers’ accounts, on its own, would net the IRS $460 billion of the $700 billion over a decade.

More money would be raised from increased auditing. Biden is proposing an infusion of $80 billion into the IRS to hire new specialized audit staff and improve technology systems. That funding is expected to raise nearly $320 billion in revenue, or $240 billion in net money after subtracting the initial investment, Treasury officials said during a call with reporters.

The additional funding would allow the IRS to add about 87,000 employees by 2031, roughly doubling the agency’s workforce, according to the report.

The Treasury estimates its proposals would raise $700 billion this decade and $1.6 trillion in the following 10 years. Outside scorekeepers have projected lower returns. The Penn Wharton Budget Model, for example, has estimated $480 billion over a decade.

It’s unclear if the full $700 billion will count under to offset the cost of the Biden plan. Treasury officials said on the call that the money raised from the plan would yield real dollars and that lawmakers in Congress should review their processes so that these dollars can count.

But the Treasury said its estimates are “conservative.” Some dynamics, like overhauling the IT systems and greater voluntary compliance due to higher audit likelihoods, are not factored into the total, the report said.

The Treasury made a detailed argument for overhauling the IRS’s outdated technology. The core tax-return processing system, which handles more than 150 million individual returns each year, was first designed in 1962 -- making it “one of the highest-risk systems in the federal government,” the Treasury said.

“The result today is decades of tax law written in a programming language that is no longer taught, a data platform that is highly complex to maintain, and an outdated system with a limited number of employees supporting it -- about half of whom are eligible to retire,” the report said.

(Updates with details on estimates of underreported income, starting with ‘IRS Estimates’ subheadline.)