This is part one of a deep dive into the problems plaguing the Internal Revenue Service. We asked current and former government officials, agency watchdogs, and tax professionals to break down how the agency landed in such a dire situation and offer their plan for how the agency can be fixed.

The IRS is drowning in paper, facing a backlog of millions of unprocessed tax returns even though the overwhelming majority of Americans file electronically.

Piles of unopened tax documents built up at IRS processing centers that shut down early in the Covid-19 pandemic. The agency initially aimed to clear the backlog in advance of this year’s tax filing season, but as it struggled to catch up, new returns piled on top of uncompleted older ones, putting processing still further behind.

Some taxpayers have waited months to receive their refunds, contributing to the billions of dollars in additional interest the IRS paid out during the pandemic.

“We are a paper-based organization operating in a digital world economy,” IRS Commissioner Chuck Rettig said at a March tax conference.

Rettig came to the agency in 2018 with decades of experience as a Beverly Hills-based tax attorney, billing himself during a Senate confirmation hearing as someone intimately familiar with the difficulties taxpayers face. The next year, Congress passed a broad reform law that called for the IRS to improve its customer service.

And yet, the IRS is still struggling. The last three filing seasons were marred by the return backlog, confusing tax code changes, and many times more phone calls to IRS help lines than the agency can handle.

The agency’s inability to keep up with its mail is the result of several factors: dated technology, antiquated requirements, overwhelmed staff, an uncooperative Congress, and millions of people who just prefer to do their taxes the old-fashioned way. Weaning the IRS from its paper addiction—which National Taxpayer Advocate Erin Collins has described as “the IRS’s Kryptonite"— could take years. But ex-employees, tax professionals, and former top IRS leaders say the solutions exist now if the agency has the will to follow through.

Read more: Gregory Macfarlane, CEO of Jackson Hewitt Tax Service, shares his solutions on how the IRS can streamline the tax-filing process.

More people than ever are filing their taxes online: Out of about 148 million individual returns that the IRS received in the 2021 filing season, 94% were filed electronically, according to a National Taxpayer Advocate report. But the 6% of e-filing holdouts, plus a slew of forms, letters, and other correspondence, leaves the IRS with a lot of paper to handle. 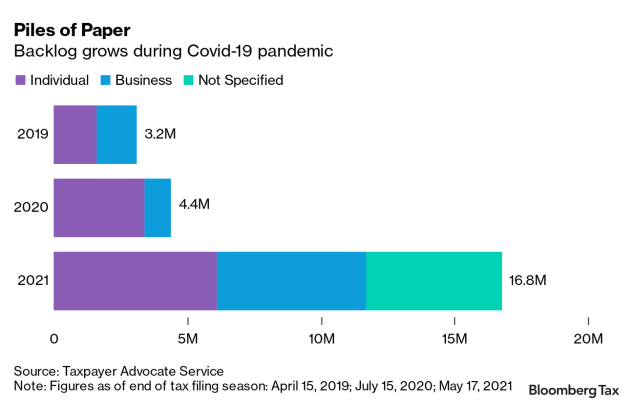 The IRS receives between 1 million to 1.5 million pieces of mail each week, Rettig said, which is the amount the agency is equipped to handle. That never-ending stream of mail makes it difficult for the IRS to recover when its processing centers go down.

Elyse Katz was an IRS revenue agent during the 2018-2019 government shutdown, which kept most federal employees at home for five weeks. Katz, now a senior manager of tax controversy and procedure at Eide Bailly, said it took nearly 18 months to recover from that shutdown.

When Katz saw that IRS processing centers needed to shut down for even longer due to the pandemic, her thought was “they will never recover from that,” she said.

Collins recently estimated that the IRS has fallen nearly a year behind in processing paper tax returns since the start of the pandemic. As of March 18, the backlog stood at almost 15 million documents.

The IRS, which now estimates it will clear the backlog by the end of 2022, is throwing more resources at the problem. It announced plans to hire 5,000 more processing center employees over the next few months, a significant personnel boost for an agency of nearly 75,000, and created “surge teams” that reassigned existing workers to process tax returns.

But avoiding a future backlog will require more than a staffing surge. The IRS needs to stem the flow of mail and more efficiently process the paper documents it does receive.

A Struggle to Recover

The IRS has been taking steps to cut down on the flow of paper, loosening requirements that certain things must be sent in by mail.

For example, in response to a March watchdog report, the IRS agreed to prioritize developing tools to allow taxpayers to communicate electronically about their tax accounts.

Still, progress has been slow. The IRS only started accepting amended individual returns electronically in August 2020 and still requires 1040 forms to be mailed in if taxpayers need to include any of the dozens of attachments that can’t be e-filed.

Others, like forms for estates and gift taxes, haven’t been digitized by the agency. The agency did allow those forms to be electronically signed in 2020, but the paper-file requirement blunted that convenience.

At times, the move away from mail isn’t even stemming the flow of paper. At the end of 2021, the IRS issued a notice that taxpayers can now submit Form 8023, which corporations use to report stock purchases, by fax.

Scanners Offer Chance to Speed Up

Speed is also a problem for the IRS when it comes to paper, one of the reasons it warns the public that they would be better off filing online. The IRS asks e-filers to wait 21 days after filing before contacting the agency for a status update on their refund. In contrast, paper filers are advised to wait six weeks.

Better technology is the primary recommendation for more efficient processing. At the end of March, Collins directed the IRS to implement 2D bar coding technology, which could save the IRS time in circumstances where people use software to prepare their return, but then print out a copy and mail it in.

The directive orders the agency to work with software companies to drum up a plan to put the bar codes on their products, something the IRS chief counsel’s office says can be requested but not mandated. Collins also suggested that the IRS adopt optical character recognition or similar technology to speed up the processing of handwritten returns and returns with unreadable bar codes.

Putting bar codes on tax returns isn’t a new suggestion: The watchdog office first recommended the use of 2D bar coding in its 2004 annual report to Congress.

IRS leadership said it wants to follow through on that recommendation, but will need the help of Congress’ to do it.

“We have asked for funding for 2D bar coding,” Sieger said in an interview. “One of our modernization initiatives is focused on digitalization, where we are looking at digitizing paper-based input where possible.”

Bemenderfer agreed that scanning technology would help speed things up, but in the near-term his asks are better equipment and more people.

He described numerous challenges his staff faces, from pens that run out of ink to broken wheels on the carts employees use to push paper returns around the facility. Examiners must label each paper document with a unique identification number, using a specific type of stamp only sold by one vendor.

“When we are depending on red pens, ADLN stamps that are serviced and manufactured by one company, or carts with wheels falling off to push paper returns through the manual process—my wish list becomes pretty quickly people- and equipment-oriented,” Bemenderfer said.